Ever try making lists of masculine and feminine traits? If you have, you’ve probably notice something significant. Positive traits (cool, courageous, strong, assertive) tend to go on the masculine side. Meanwhile, negative traits (weak, passive, concerned, superficial) go on the feminine side. The idea of masculinity as better than femininity is so pervasive that it’s right there in your subconscious.

Obviously, this is bad news for anyone who’s aligned with femininity – whether cis or trans women, nonbinary or male femmes, etc. Being considered inferior isn’t exactly good news for survival in the workplace or in relationships.

However, the privileging of masculinity is a double-edged sword that hurts everyone, including those who benefit from it. For instance, when logic becomes a male trait and emotions become a female trait, suddenly it’s bad to show any sort of emotional complexity or sense of empathy. Those aligned with masculinity cannot have real emotional bonds with anyone or else they’re “sissies” and “girls.” In this way, they’re pushed out of maleness and their Man Card is revoked.

This constant pressure to be as manly as possible is called toxic masculinity. There’s been a lot of discussion about toxic masculinity, mostly in how it affects cisgender men. However, GUMBALLS, a new Top Shelf Productions comic created by Erin Nations, focuses more on how toxic masculinity affects other kinds of masculine folks.

GUMBALLS is a variety show of a comic. It covers fictional stories and snapshots of characters that Nations has created, as well as personal stories from his childhood and adult years. In some of these, Nations talks about his current life, a hectic mess of hormone therapy, coming out as a transman to coworkers, managing anxiety, working a day job at a grocery store, and freelance cartooning in his spare time. In others, he describes his childhood as a triplet, figuring out his own identity as a boy and individual while others expect him to be a clone of his two sisters. However, throughout this comic, in fiction or nonfiction, childhood or adult stories, Nations explores a dominant theme: where does he stand in a masculinity that consistently tries to Other him?

Let’s start out in the beginning. In one of the first stories in GUMBALLS #1, Nations describes his yearning for masculinity as a kid. He obsessively watched STAND BY ME and imagined himself as part of the all-male clique in the movie. As he reached adolescence, his body looked less and less like the bodies of the characters he idolized. Other kids would ask Nations why he acted so weird for a girl. At the time, he had few words to describe what he was going through. All he had was the term “tomboy,” which he believed meant “a boy with a girl’s body.” To him, a tomboy was simply a boy with a different body type. 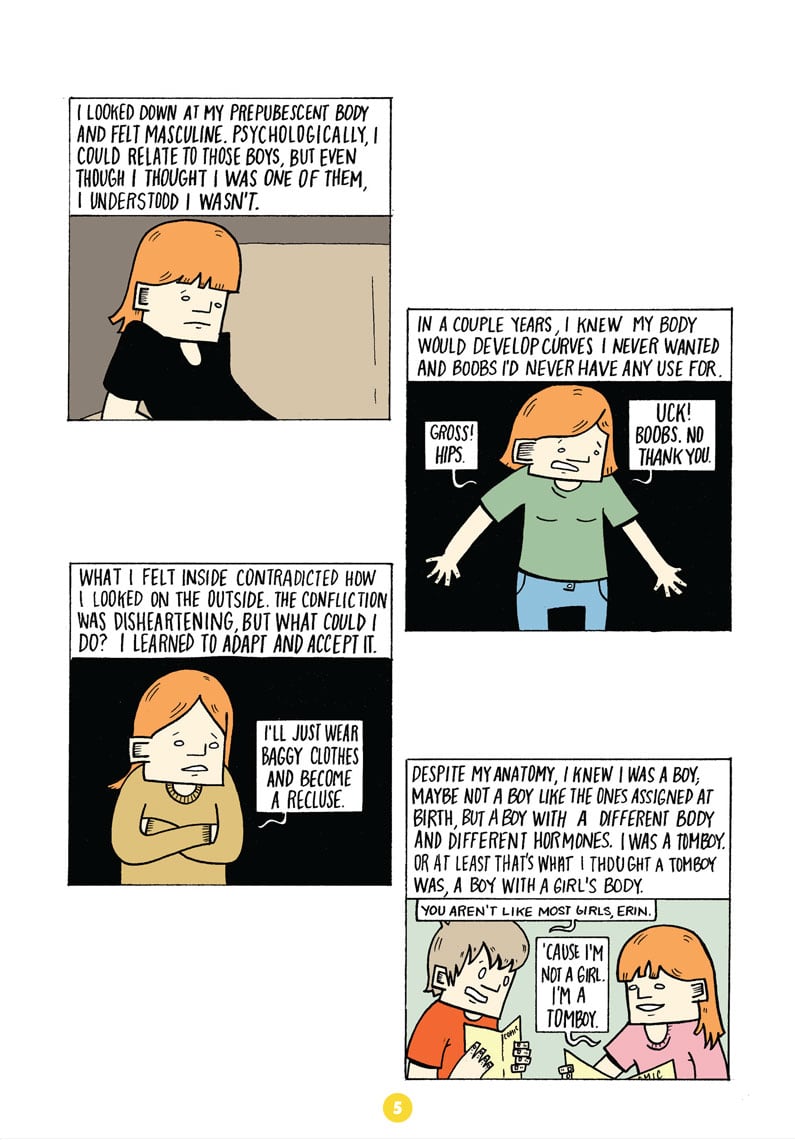 Yet that’s not what “tomboy” means to everyone. In part, this is a good thing. The term is so ambiguous that any child designated “female” who’s interested in any gender variance can claim it. For instance, as a kid, I called myself a tomboy to express what I would later realize what was a non-binary identity. To me, “tomboy” meant a third gender, rather than girl or boy. It could also be a young queer girl’s way of understanding an attraction to other girls, a drag king’s respite to play dress up, or a trans girl’s way of reclaiming her masculine side. None of these perceptions of the tomboy identity are quite the way Nations viewed it, but they’re all equally valid.

READ: Here’s how Harry Style’s fashion sense relates back to the history of androgyny in music!

On the other hand, most of our society wouldn’t agree with or even understand Nations’ understanding of “tomboy.” After all, one of the ways we maintain the perception of masculinity as superior is by associating it with specific bodies. This is why a tomboy is a childhood identity only. After a certain point, everything from media to individual people will try to feminize tomboys and force them out from the masculine world. That’s why in movies the tomboy always transforms into a normal young lady by the end. The less that Nations’ body looks “male,” the less legitimate people view his claims to maleness.

In one panel of GUMBALLS, the cast of STAND BY ME lines up in front of a young Erin Nations. They tell him that he’s “just a girl” and therefore can “never be one” of them. Even though these are fictional characters coming from Nations’ mind, what they say here is telling. It means that even though Nations has always seen his body as a boy’s body, society has taught him that his childhood gender expression is not enough for him to be considered male. He is an outcast, a not-quite boy who does not quite belong. 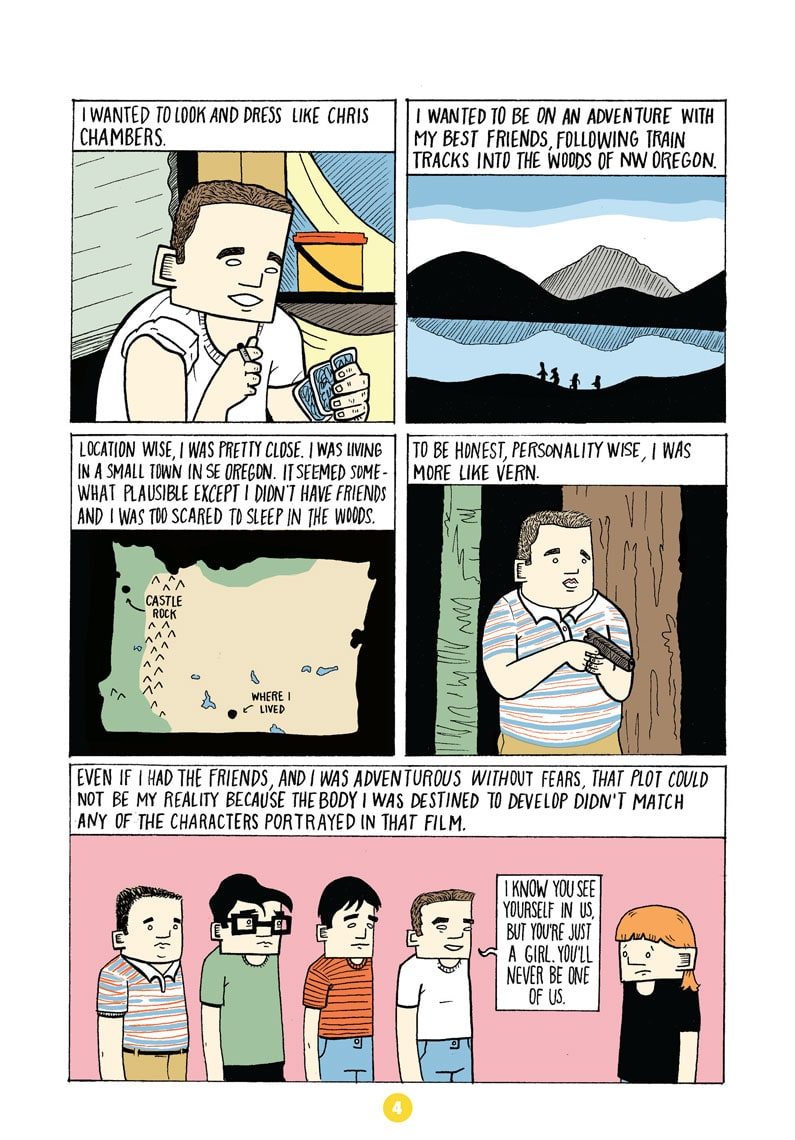 This awkward relationship between Nations and societal masculinity is present in later years as well. In the comics about Nations’ adult years, we learn about the time Nations kept getting catcalled on the way to work. We also learn about Nations’ social anxiety when answering the phone or when people misgender him. In these instances, the outside world seems to be aggressively fixated on feminizing Nations, even though he has a pretty masculine appearance. He lives in constant fear of violence and rejection because he doesn’t fit in with a masculinity focused around anatomy and the perfect male body.

This has an emotional toll on Nations. In the final comic of GUMBALLS #1, Nations weeps on the bus when he hears about the suicide of transgender teenager Leelah Alcorn. He then quickly dries his tears and later berates himself as “a disappointment” as he goes to bed. What’s fascinating here is that there are two masculinities in conflict with each other at this moment. Nations’ internal trans masculinity allows him to empathize so closely with another transperson that he cries in public at the injustice around her death. However, the cisgender toxic masculinity that Nations has internalized reminds him that emotions and empathy are signs of weakness and that he should feel ashamed about the very human connection he just made. Clearly, Nations is measuring himself against an impossible and legitimately harmful ideal. He’d probably be better off going with his own instincts about what masculinity means to him.

READ: Here are great things about the new series EYEWITNESS, including its representation of LGBT people and mental health!

The work of toxic masculinity to kick out the wrong bodies and keep people on the fringes of the male world shows up again in Nations’ fictional narratives. For example, there’s Tobias, the protagonist of Nations’ other comic VISION QUEST, who makes several appearances in GUMBALLS. Tobias is a fat, gay, male high schooler with social anxiety and a huge crush on River Mancuso — a popular boy who couldn’t care less about him. River and his guy friends all give Tobias humiliating dares and call him homophobic slurs in efforts to feminize him and remind him of his outsider status. However, Tobias passively accepts the dares and insults, just to get in with this masculine crowd and get close to his unrequited love. 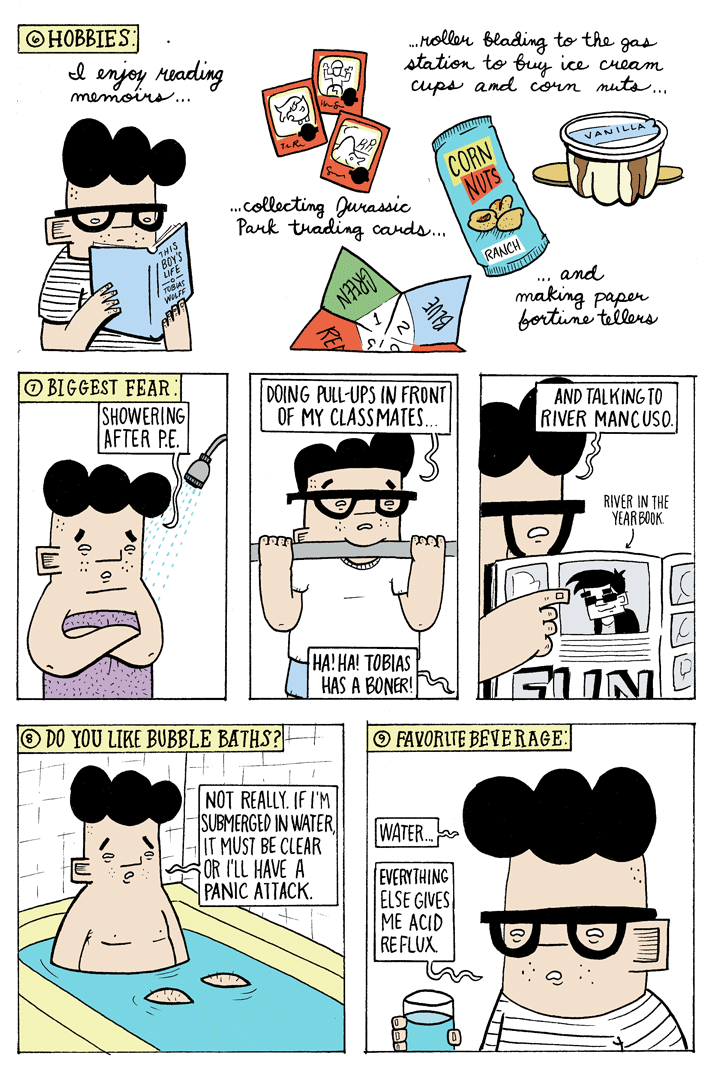 In many ways, the situation of Tobias mirrors Nations’ adult life as a transman, as well as his childhood as a tomboy. In all three scenarios, an outsider does whatever it takes to enter the realm of cisgender masculinity, a vaulted castle that actively works to demean certain bodies and keep them out in order to maintain biological superiority.

When looking back on Erin Nations’ initial instinct as a kid to describe himself as “a boy with a different body,” I think he’s absolutely onto something. Innately, he knows that masculinity can’t just be confined to certain body types. His own body has always been masculine, just as any body could be. Likewise, any body can be feminine as well. That’s the problem with societal understandings of gender. We think of gender as a hierarchy where masculinity is the best, and so we use bodies as a way to keep masculinity off-limits to those we deem undeserving.

Nations knows that societal maleness is toxic. It’s why he anxiously ruminates on the phone or going to work about whether his voice and appearance are male enough to appease strangers. Never mind that Nations’ known for decades that he’s a man. It’s why he writes about Tobias bending over backward for a cruel and heartless male audience. As it is for any of us who associate ourselves with masculinity, Nations must reclaim what his gender really means to him. GUMBALLS is a vehicle for creating new masculine spaces, ones that are healing spaces for trans bodies, fat bodies, bodies that cry, shake, and feel. That’s what GUMBALLS is all about.