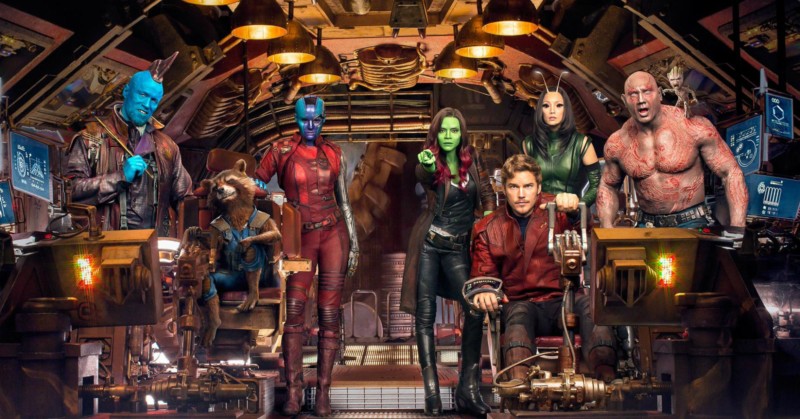 GUARDIANS OF THE GALAXY VOL. 2 is an explosion of vivid color, comedy, and music in a Marvel film. It is Marvel’s funniest film by far. A winner in every sense of the word, Disney raked in more than $500 million in the first couple of weeks. Marvel Studios made another film that’s certified fresh on Rotten Tomatoes. Writer and director James Gunn gets to wear the crown as “Best filmmaker in the MCU” for now.

Doubling Down on the Cosmic Magic

Peter Quill a.k.a Star-Lord (Chris Pratt), Gamora (Zoe Saldana), Rocket (Bradley Cooper), Baby Groot (Vin Diesel), and Drax the Destroyer (Dave Bautista) are back to save the galaxy from destruction. What was magical about GUARDIANS OF THE GALAXY VOL. 1 was how it embraced the absurd concepts from the comics. GUARDIANS OF THE GALAXY VOL. 2 doubles down on this. For example, the film opens with the Guardians protecting valuable batteries for the Sovereign people in exchange for Nebula (Karen Gillan). Ayesha (Elizabeth Debicki), the High Priestess of The Sovereign, leads a race of perfectly genetically engineered species. Their golden exterior isn’t the only thing ridiculous about them. Their true absurdity comes from their arrogant characteristics and hypersensitivity to insults. Furthermore, James Gunn adds further comic book magic by introducing cosmic obscurity in Ego the Living Planet (Kurt Russell).

Ego, an actual living planet, is a lot to take in for people unfamiliar with celestial beings in Marvel. However, Gunn justifies Ego’s existence by using straightforward exposition and Kurt Russell’s charisma. His performance is neither over-the-top nor subtle, but it pulls you in and engulfs you with the magnitude of the entire Marvel Universe. Add the film’s colorful imagery and Ego becomes a palatable character.

The sheer magnitude of Ego isn’t the only thing that makes him work as a monstrous villain. It is his covert psychopathic behavior and callous intentions for Peter, his son, is what makes him terrifying. Unlike the previous villains to appear in the MCU so far, Ego doesn’t have any redeeming qualities. His grand plan reveals that he fathers children throughout the galaxy to use and murders them for more power. What’s worst is the charismatic charade he uses to lure them in like a predator. Also, he gave Peter Quill’s mother a tumor that killed her. If it weren’t for the comedy, this film would be much darker.

Too Much Comedy, And it Hurt Drax

The comedy in the GUARDIANS OF THE GALAXY VOL. 2 made the film great, however it was the film’s Achilles heel at the same time. It’s non-stop comedy made it the funniest Marvel Movie you’ll ever see, and for a good reason. Dave Bautista gave a great performance as Drax as he delivered the best punchlines throughout the film. Not to mention, Baby Groot was used to perfection when this version of him could have really fell flat. Even the Sovereign had their comedic moments when they kept popping up wherever the Guardians were throughout the plot. However, some of the jokes in the film dragged on longer than it needed to. For example, the bit about Taserface’s (Chris Sullivan) name between Rocket and the Ravagers fell flat and dragged on. That bit, like a few others in the film, made the comedy inorganic at times.

READ: Love the soundtrack to GUARDIANS OF THE GALAXY VOL. 2? Here’s the mixtape analysis!

The “You’re Ugly” bit between Drax and Mantis (Pom Klementieff) was another instance where the comedy felt inorganic. For one, the joke didn’t land well, and they continued to go back to it making other scenes slightly awkward. Also the scenes between Drax and Mantis provided an opportunity for James Gunn to give Drax more depth. Gunn could have elaborated Drax coping with the death of his daughter in the scene where Mantis feels Drax’s pain. This would explain Drax’s characterizations better because we are accustom to his dark humor and rage like in VOL. 1. However, in this film Drax carries the comedic load while all of the surrounding characters are having their moment. Drax’s comedic performance was brilliant but maybe we will hear his entire backstory featuring, his daughter Moondragon, in VOL. 3.

We get more character depth in GUARDIANS OF THE GALAXY VOL. 2. We learn why Gamora and Nebula’s relationship is volatile, and we learn that Thanos is to blame. Their storyline is seemingly connected in VOL. 2 and it helps Nebula’s character more than anything. In VOL. 1, Nebula was a one dimensional display of anger, but James Gunn gives her a backstory to make us care about her as a character. Going forward Nebula is more complex given that she has a story with Gamora that we can be invested in.

READ: Want an analysis on the Guardians trilogy? Read about the “Middle Child Syndrome”!

However, Yondu (Michael Rooker) is the breakout star in VOL. 2. His unexpected arc is the best part of the film because it is emotionally rewarding and its relevant to his character. In VOL. 1 we’re introduced to Yondu as the leader of the Ravagers who kidnaps Peter Quill, but we’re given a reason why this time around. Like Rocket, Yondu is a jerk, but he’s more than his rough edges. Yondu’s arc in the sequel parallels his guilt to his fall from grace and redemption as a Ravager’s Captain. Knowing what’s going to unfold between Peter and Ego, Yondu’s guilt causes him to risk his life for Peter’s.

Yondu’s redemption is the emotional heart string of this film. He teaches Rocket to trust his teammates instead of pushing them away like he did with Peter. Which is almost as good as getting Peter to realize that the Guardians are his family even though they aren’t his blood relatives. This parallels Peter and Yondu’s relationship because Yondu tells Peter that he has always seen him as his son. He does this as he sacrifices himself to save Peter from Ego. His redemption is ironically completed by the end of the film when he’s given a Captain’s funeral and he is forgiven by his fellow Ravagers.

Yondu’s exit from the MCU was the most touching moment of this film. However, the film leaves you feeling like there should have been more moments if Gunn wasn’t trying to garner more laughs. For example, Rocket’s storyline is missing one moment between him and Peter that needed to be obvious. Not saying they didn’t have nice moments, but considering how the film started you’d hope to see a nice reunion. James Gunn had the moment set up perfectly after Peter and Rocket split up after butting heads in the beginning.

Rocket went through most of the film alone since his partner in crime, Groot, was a baby. Keeping in mind that Groot is a baby Rocket has to explain everything to, he couldn’t confide in him. Furthermore, we find out why Rocket does what he does, like steal the batteries and insult the Sovereign. Rocket has never gotten over being an experimentation that turned him in to a cyborg. So he pushes the other Guardians away because he’s afraid to get closer to them and trust them. While Rocket realizes this with Yondu, who he’s more similar to, it would have been more emotionally appealing with Peter. This is disappointing because the two characters start the film like they were going to have a big resolution, but we don’t get it. Gunn definitely misses a moment in VOL. 2 where he could of had a more emotional appeal.

GUARDIANS OF THE GALAXY VOL. 2: Meeting Expectations, but Not Exceeding

James Gunn’s GUARDIANS OF THE GALAXY VOL. 2 meets expectations with very little let downs. By far the funniest of the Marvel films, it is also the most colorful with the best soundtrack. With that said, VOL. 2 doubles down on all of the creative cosmic genius from the first one. From the use of characters like Baby Groot, to flawlessly introducing new concepts like Ego the Living Planet in MCU, James Gunn is a genius at taking bold concepts like the Celestials, and making them work in film.

However, VOL. 2 isn’t quite as excellent as VOL. 1. The original GUARDIANS OF THE GALAXY balances comedy and the character arcs better. VOL. 1 is funny as it is equally dramatic for each of the characters. This contrasts VOL. 2 because it uses Baby Groot and Drax for comedy, and all of the other Guardians for drama. The plot in VOL. 2 is also relatively shorter than the plot in VOL. 1, but this doesn’t necessarily hurt the film because it’s filled with a lot of action. The sequel also relies on comedy a little bit too much. This is why some scenes rely on the charisma of its actors like Dave Bautista and Kurt Russell. Despite some of the flaws, GUARDIANS OF THE GALAXY VOL. 2 is still a great film. It’s still full of action, re-watchable, and it’s a fun time at the movies.