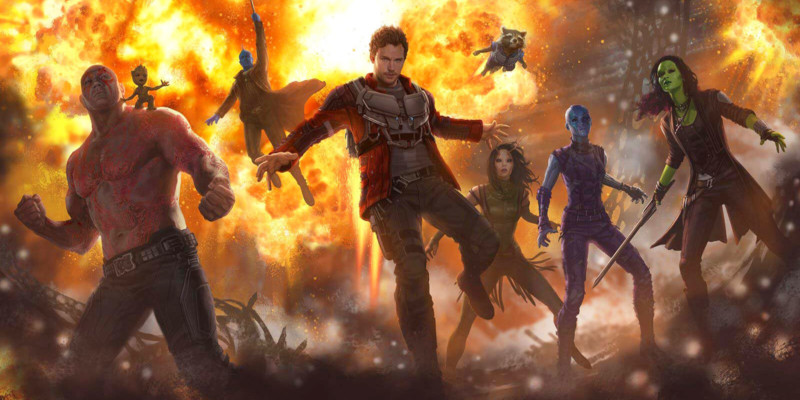 Few can argue that GUARDIANS OF THE GALAXY was a surprise hit. On paper, GUARDIANS is rife with issues. It needed to balance humor and space opera drama while at the same time juggling an eclectic cast of characters. Two of which just happen to be a snarky talking trash panda whose partner is a tree. Yet it is one of the most popular MCU films to date, and the hype is unreal for the upcoming VOL. 2. You could have an endless list of what exactly made the first GUARDIANS work; the 80’s soundtrack, the hilarious and endearing characters, the humor, Groot saying his name, it never ends.

But what keeps this infamous group of guardians so fresh and inimitable is the watchful eye of director/writer James Gunn.  The guy clearly loves the universe–especially these characters. He actually loves them so much he will become the first director in Marvel Studios history to complete a trilogy. But tackling a trilogy is no easy feat. Few trilogies can sustain quality through all three films–even RETURN OF THE JEDI was considered a low-point until the prequels premiered. But what makes a good space opera trilogy, and how can Gunn build upon his already immense success?

A (Very) Brief History of the Trilogy “Middle Child” 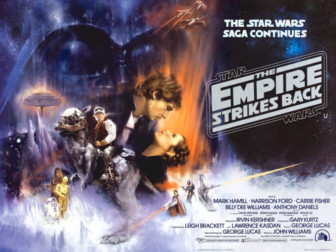 There are two near-perfect examples of excellent middle films in a trilogy. THE EMPIRE STRIKES BACK and THE DARK KNIGHT are not only sequels that are undeniably better than their original, they are two of the most celebrated films in their respective genres. If anyone you know says they hate sequels, politely point them to one of these films. They also just happen to be the “middle child” of their respective trilogies.

THE EMPIRE STRIKES BACK is actually the blueprint many fans hold sequels to. Since that film premiered, directors and writers have tried to capture the magic that made the sequel to STAR WARS so good. So since then, we have seen plenty of sequels that are relentlessly darker than their original. THE DARK KNIGHT is a good example of this working to perfection. STAR TREK INTO DARKNESS is a good example of it not. Even Rian Johnson, director of the upcoming THE LAST JEDI, is already having to defend his film as not being “another EMPIRE.”

What About MCU Sequels?

The MCU has had a hard time with sequels for the most part. None of the sequels were ever terrible, but few actually bettered their original in any way. In Phase One and Two we saw the biggest stumbles in both IRON MAN sequels and THOR: THE DARK WORLD. Even AGE OF ULTRON came with its share of criticisms; Joss Whedon clearly struggled to capture the magic that made THE AVENGERS so good.

READ: Want some GUARDIANS to hold you over till VOL. 2? Read this review of GAMORA #1!

But we also have amazing sequels like THE WINTER SOLDIER and CIVIL WAR. The Russo brothers built upon Captain America’s first outing in all the best ways, and at the same time set a new precedent for Marvel films. Ever since THE WINTER SOLDIER proved that a political thriller could work in a superhero skin, we have gotten a heist film (ANT-MAN), a visual blockbuster (DOCTOR STRANGE), and of course a space opera. Marvel Studios is even continuing this trend by hiring Taika Waititi to direct what looks to be an absolutely bonkers version of Thor with RAGNAROK.

But if we’ve learned anything from Marvel sequels, it’s that more of the same isn’t always a good thing. As far as direct sequels go, the MCU has had a really tough go of it. IRON MAN 2 was decent enough but overall felt like they did it just because of Downey Jr.’s popularity as Tony Stark. For IRON MAN 3 and THOR: THE DARK WORLD were amiable attempts with talented directors, but failed to live up to the high standard their Phase One predecessors set. The first GUARDIANS established the team, but where do they move from here? 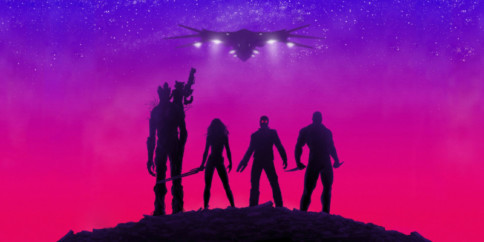 There’s no way Gunn doesn’t have a vision for these projects. He probably wouldn’t have signed on for another movie if he didn’t know where GUARDIANS is heading. He loves the characters so much he’s even is making sure they use them right in the upcoming INFINITY WAR! But if there’s anything we know about Gunn, it’s that his GUARDIANS trilogy will be unpredictable. We’re talking about the dude who wrote SLITHER and SUPER, so far he hasn’t done the same thing twice.

If you think that VOL. 2 is going to pull an EMPIRE STRIKES BACK, you might be disappointed. There are a lot of reasons why this is, but the biggest is that VOL. 3 likely isn’t going to directly follow VOL. 2. The Guardians are appearing first in INFINITY GAUNTLET, which means VOL. 2 likely isn’t going to end on a dark cliffhanger a la Han becoming carbonite or Vader admitting he’s Luke’s father. This isn’t necessarily a bad thing because GUARDIANS isn’t STAR WARS. What makes the franchise so fresh in the sci-fi scene is how different it is in compared to its dark and dour counterparts. The first is a bright, colorful film and VOL. 2 would do well to continue that trend.

…Without Repeating the Past

The worst way to go would be an “if it ain’t broke, don’t fix it” approach. Both IRON MAN sequels suffered from the same plot as their predecessor: Tony meets a rival inventor, except of course they are evil, and he’s not. Likewise, THE DARK WORLD had a more interesting plot than the first THOR but tonally felt exactly the same, with Loki stealing the show in both. Yes, everything seemed to work in the first GUARDIANS. But if there is anything wrong with comics movies today, it’s that they are all starting to blend together. There are close to ten comic book films per year, in order to stand-out your film will have to have something special. Something that lets that film rise above all the others in the increasingly large pile. The GUARDIANS franchise has a lot going for it, but opting for another version of the first film is the worst possible way to move forward.

If we’ve learned anything from the (very) few successful Marvel sequels, it’s that mixing genres yields results. THE WINTER SOLDIER was just as much a political thriller as it was a comic sequel; it was also light-years better than its predecessor. The GUARDIANS franchise has been straddling two genres from the get-go: space opera and comic adaptation. While the first was very much a sci-fi epic, it was also still heavily leaning on its comic origin story roots. Moving forward, Gunn is going to have to surprise an audience who have made Rocket Raccoon and Groot household names. Avoiding the dreaded sophomore slump is no easy feat, but Gunn is the man who can get an amazing space opera trilogy into the MCU. GUARDIANS OF THE GALAXY releases this week, so we’ll have to wait and see if VOL. 2 lives up to the hype.