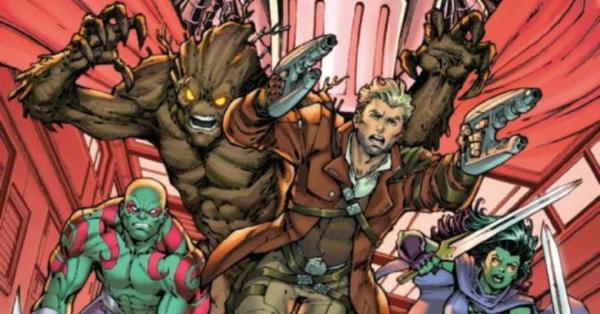 READ: Want more Guardians? Here is our review of STAR-LORD #6!

Is the Dream Too Good to be True?

GUARDIANS OF THE GALAXY: DREAM ON #1 begins with Drax the Destroyer standing amongst several superheroes whom Thanos has defeated. In one hit, Drax kills Thanos. Free to pursue a new passion, Drax becomes a famous saxophone player. Gamora arrives, revealing that Drax is dreaming. From there, Gamora and Drax travel from fantasy world to fantasy world, picking up the rest of the team. Once they’re all assembled, Star-Lord figures out how to wake everyone. Awakened, they acquire their weapons just in time to defend themselves against the bounty hunter Death’s Head. They dispose of this robotic villain in Guardians-like fashion and soon are on their way to figuring out who has abducted them.

As someone who only knows about the Guardians from their 2014 movie, this issue entertained me. Each Guardian resembles their film counterpart. Star-Lord, for instance, is still a smart-ass who is quick with a witty remark. He is one of the first to realize they are all in a dream, yet he chooses to stay. His fantasy, quite beautiful in its simplicity, brings him too much joy. Drax’s surprised me. He is such a fierce warrior that to find out Drax secretly wishes to be a smooth musician is hilarious, yet also sweet in a way.

From a story-telling perspective, this issue plays out exactly as you’d expect if you’re familiar with the dream sequence plot device. This trope begins with the audience initially believing that the events they are watching are real. However, in DREAM ON, it is established that fantasies will be given to anyone under the influence of the dreaming device. Readers can then make the assumption that certain parts of the story are not real. It is easy to pinpoint where reality ends and fantasy begins in GUARDIANS OF THE GALAXY: DREAM ON #1. It’s not as wacky as INCEPTION, but it’s entertaining enough for a cliché.

The fight sequences are engaging to read. Each Guardian has unique commentary during their battle. Part of what makes these scenes so entertaining is the artwork. Artist Andrea Di Vito showcases the Guardians’ unique skills and how they complement one another. I had to look at the fight scenes more than once to see how well executed the team fought. Each panel not only shows an attack that happened but also sets up the following action. It is clear where each Guardian is in relation to the setting. Most team comics tend to focus only on certain characters during a fight, making it seem like the others are just sitting around. This is not the case with GUARDIANS OF THE GALAXY: DREAM ON #1.

This issue’s story might be predictable, but the charisma of the Guardians saves it. If you’re a fan of the GUARDIANS OF THE GALAXY film, this issue is worth reading. If you’re looking for a comic with a compelling story, you might want to look elsewhere. I’m sure there are far better GUARDIANS OF THE GALAXY comics out there. Although to be fair, this is only the first issue. Sumerak might turn it around yet as the series continues.