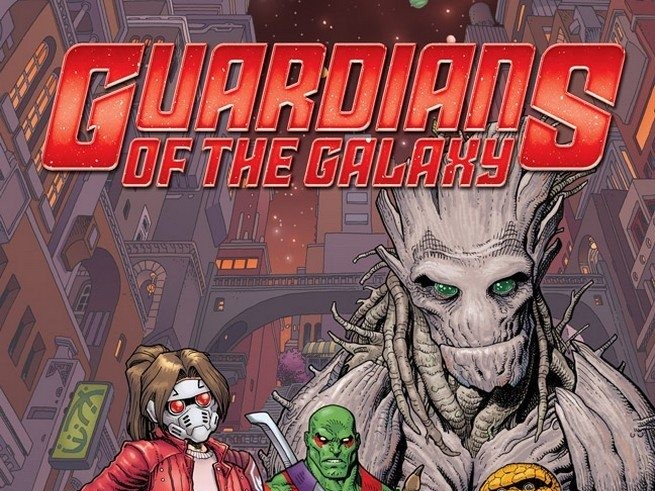 A galactic conspiracy is being formed, one that threatens everything.  While that rumbles in the background, the Guardians of the Galaxy rescue a mysterious artefact from the Chitauri.  Considering where to take it in order to unlock its secrets, they decide to head to a certain Emperor of Spartax, but arrive just in time to receive an enigmatic warning from a defeated Gamora…

So far, it’s looking as though some books have taken the idea of the eight-month time-jump and pretty much ignored it; for Brian Bendis, it’s the perfect tool to effortlessly launch you into a new status quo.  Back when the X-Men tried the same trick a couple of decades ago, they made the mistake of changing characters and powersets, and never explained it.  But the eight-month time-jump in the comics is essentially just an opportunity to mix things up, and Bendis does it with a whole new team. 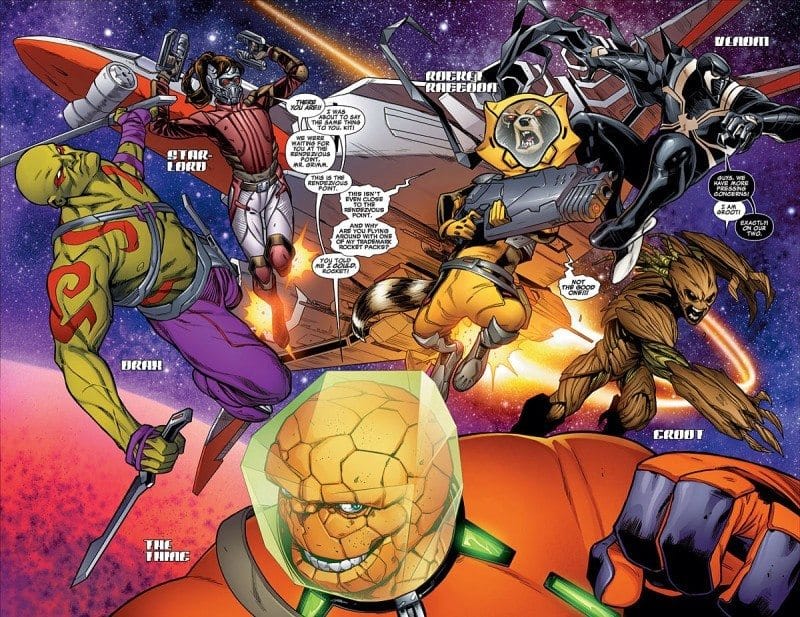 Kitty Pryde is swiftly established as the beating heart of GUARDIANS OF THE GALAXY, and I can’t help feeling that she must be one of Bendis’ favourites; he did so enjoy writing her in ALL-NEW X-MEN, after all!  Valerio Scott captures Kitty well, although I have some qualms about the Star-Lord outfit when the mask’s raised; when it’s down, though, she’s simply adorable.  There’s a page dedicated to a sort-of conversation with Rocket that absolutely shines.  Kitty’s every emotion is worn on her sleeve, and you really get a sense that Bendis trusts Scott to tell the tale.

The other big change to the status quo is the addition of the Thing, and Bendis pulls off a fairly typical presentation of the character with flair and verve.  The Thing’s inner monologue at the start of the book is effectively a way of justifying his presence in the GUARDIANS, and it pays off, but from there nothing too original is done with him.  Even Great Aunt Petunia gets a reference, showing that Bendis is committed to a pretty standard Thing.  I’m just hoping that changes; to me, the Thing has been stuck in a stasis pod character-wise for far too long, and I’d like to see something a bit more original. 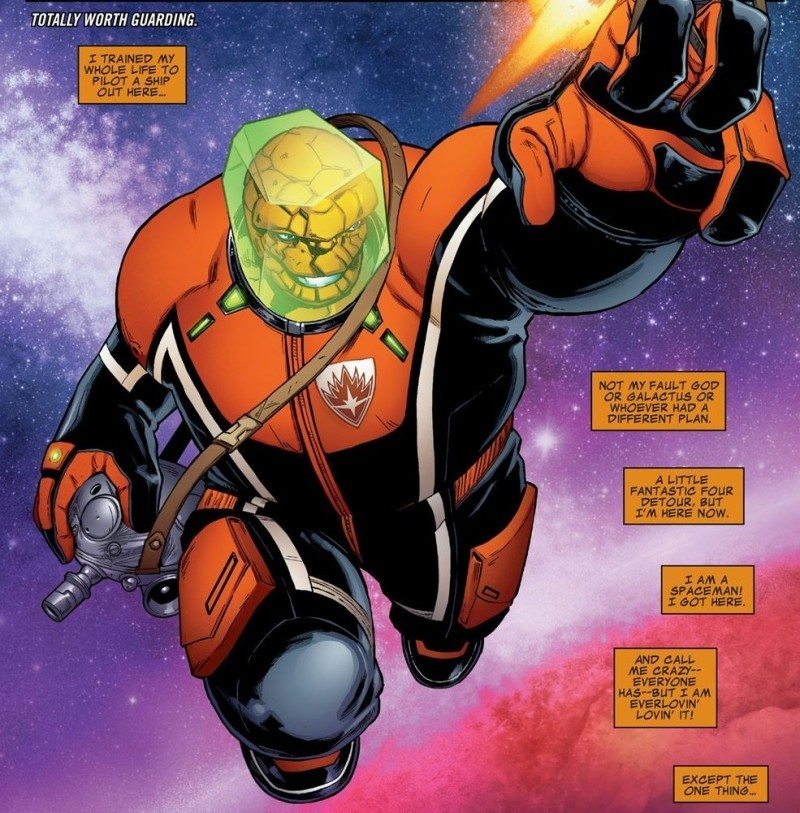 Of the rest of the cast, Bendis doesn’t trouble too much with Drax, but uses Groot and Rocket in the kind of humorous exchange he manages so well.  Rocket’s attitude towards Peter Quill is really entertaining, but it doesn’t require any unpacking; you laugh, nod, and move on with the story.  For Peter Quill, though, things don’t fare too well.  Bendis picks up Quill in his role of Emperor of Spartax, and unfortunately can’t resist throwing in the clichéd ‘king / emperor’ tropes straight off – boredom with tedious duties, a woman proposing an, ah, ‘alliance’… Although the latter scene is saved by Scott’s brilliant artwork, the sad fact is that these are just clichés.  Again, I’d rather have seen something original.

READ: Check out our thoughts on 2014’s GUARDIANS OF THE GALAXY movie!

It’s worth noting, though, that this book is an effective counter to the claim that the movies are affecting the comics too much.  I mean, look at this roster – you’ve got a whole new team, one that even includes a starring role for a character Marvel Studios don’t have the license to use!  But, as Axel Alonso observed at NYCC 2015, this is a book that matches the tone of the movies – their irreverent humour, their rich and kinetic style.  That’s an influence that I really don’t mind.

I do have to make a call-out to one scene, again a conversation (a homage to the GUARDIANS OF THE GALAXY movie, where a matter-of-fact conversation turned into a superstar moment).  Bendis produces sparkling dialogue (the Thing in particular shines, and his questions actually do make you think); Scott gives a beautiful sense to the body language, speaking far more than Bendis’ dialogue does.  It’s the perfect pairing.

Any first issue is really judged by how effectively it sells the series.  In the case of GUARDIANS OF THE GALAXY, it sells me on a series that’s going to be fun, with high-stakes and a lot of craziness.  Some of the plot elements don’t exactly feel original, and that’s not necessarily a good thing, but for a book this fun I’m willing to suspend some of the criticism.  This first issue is definitely a good pitch.