“Guardians” is an independent series that follows two superheroes—Chaos and Element—as they save Delta City and learn about humanity and their own identities. Written by Todd Black and with art by Chua Eng Chee and Alex Garcia, “Guardians” has a great concept that if fleshed out to its potential could be an equal parts think-piece and action comic.

While off to a rocky start with its first issues, Guardians #4 was a vast improvement. For starters, the dialogue was much more concise. Since Chaos and Element are supernatural beings—sent from a creator to protect Delta City—they are still trying to understand human beings. Prior to this issue, the brothers discussed how human function would end up in long tangents. 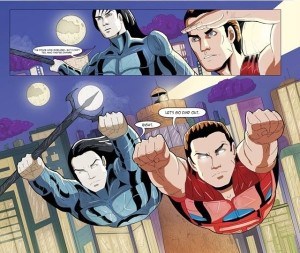 Issue #4 takes place after the defeat of Tempest, a man who had powers to control the weather. While flying about the city, the superheroes spot some trouble and end up assisting the police by chasing down a thief, who turns out to be the comic’s next villain. In keeping with the theme, the new villain, Phase, has abilities as well which allows him to pass through solid objects. This poses quite a challenge for the Guardians.

“Guardians” is simple in its approach and straightforward in its storytelling. Focusing on the human element of the story is a nice touch, and can take this comic far.