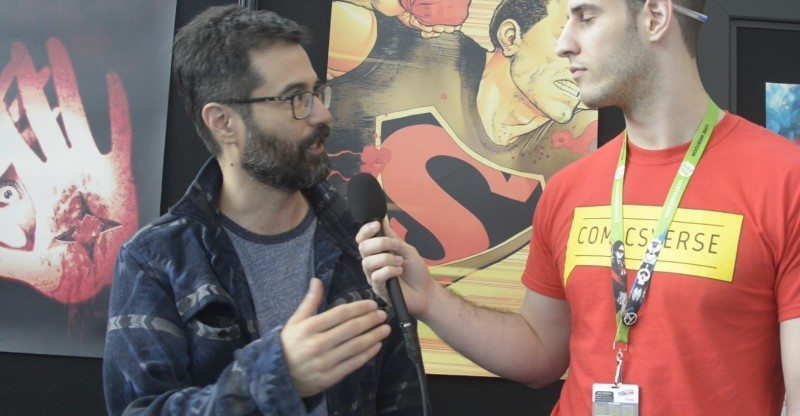 One of my most exciting interview opportunities at New York Comic Con in 2015 was an interview with DC Comics‘ Greg Pak, where we talked ACTION COMICS, BATMAN/SUPERMAN, as well as getting a little advice from him for up and coming comic creators in the comics industry!

In our video interview, Greg Pak explains his inspiration behind the development of this generation’s Man of Steel with Post-Crisis New 52 SUPERMAN. He also discusses Clark Kent‘s current predicament as a superhero who no longer holds his identity secret.  Greg Pak also goes into how this not only affects ACTION COMICS but the BATMAN/SUPERMAN series as well. In BATMAN/SUPERMAN, both heroes’ journeys veer off-track from what was once considered their iconic selves and their characters’ status quo. Batman is no longer Bruce Wayne, but rather Jim Gordon wearing a robotic Bat-suit controlled by Gotham P.D. and Clark is, again, de-powered and living without his secret identity. Finally, Greg Pak gives some wonderful advice for those looking to break into comics.

LISTEN: Did you know Greg wrote Marvel’s STORM? If you’re an X-Men fan, listen to our podcast about another major X-Character — Emma Frost!

Overall, interviewing Greg Pak was an excellent experience. I hope it makes an interesting interview to watch. I also hope it provides more information about the titles he currently creates and develops. It was great to learn about his inspirations and where these titles are going in the future. After all, It’s not every day that you get to talk to one of DC Comics’ top writers and have him go into such depth about his work!

As Greg says, you can learn more about him and buy some awesome Greg stuff over at his website!

Don’t forget to show us some love! Tweet/Post/Re-Blog this interview as much as you can. Please leave us some comments to let us know what you thought!