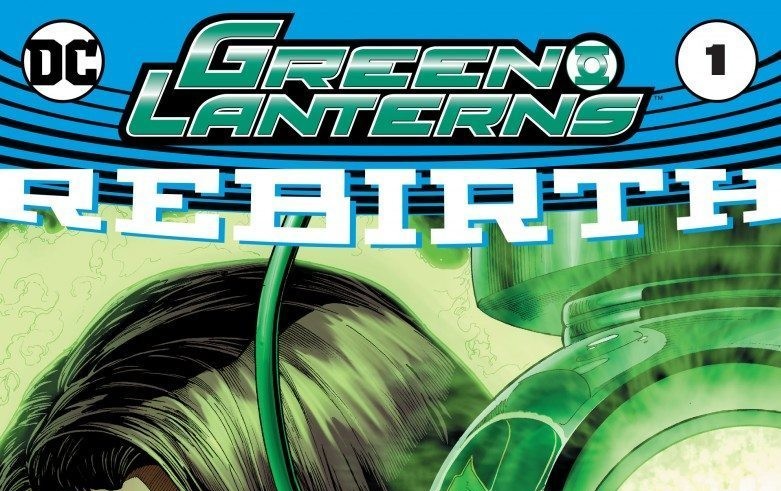 GREEN LANTERNS REBIRTH #1 is the first green lantern title to come out of the DC REBIRTH event, and it’s a good one. The issue wonderfully builds up the two newest members of the Green Lantern Corps from Earth, Simon Baz, and Jessica Cruz. With fantastic artwork, the issue begins their journey as they become partners and learn how to be Green Lanterns.

Simon Baz may be one of my favorite underused characters in the DC universe. I find his cultural backstory interesting and could be expanded upon. Before becoming a Green Lantern, he was persecuted for his ethnicity (Middle Eastern-American) along with his sister. Also, after losing his job, he became a car thief and after an unfortunate bomb-related carjacking, he was arrested as a terrorist. He wasn’t held for long, however, since a power ring selected him as a Green Lantern. 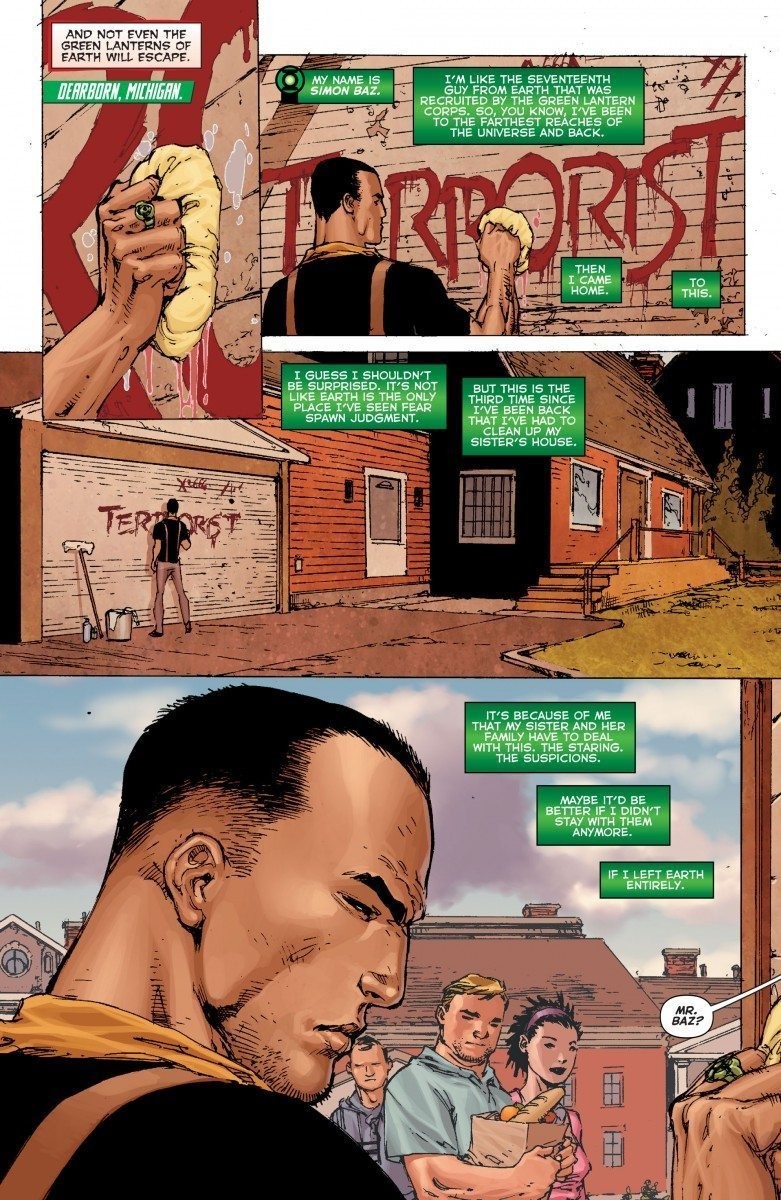 Jessica Cruz’s story is very different from Simon’s. After Power Ring from Earth-3 is killed in the Forever Evil event, the ring of Volthoom chooses Jessica to be the next Power Ring (Earth 3 version of Green Lantern). Unlike the Green Lantern ring that selects members based on willpower, the ring of Volthoom picks people that are fearful. The ring sought her out and found her cowering in her apartment. It turned out that Jessica had become a paranoid shut-in after witnessing men kill her friends and believed they were after her. 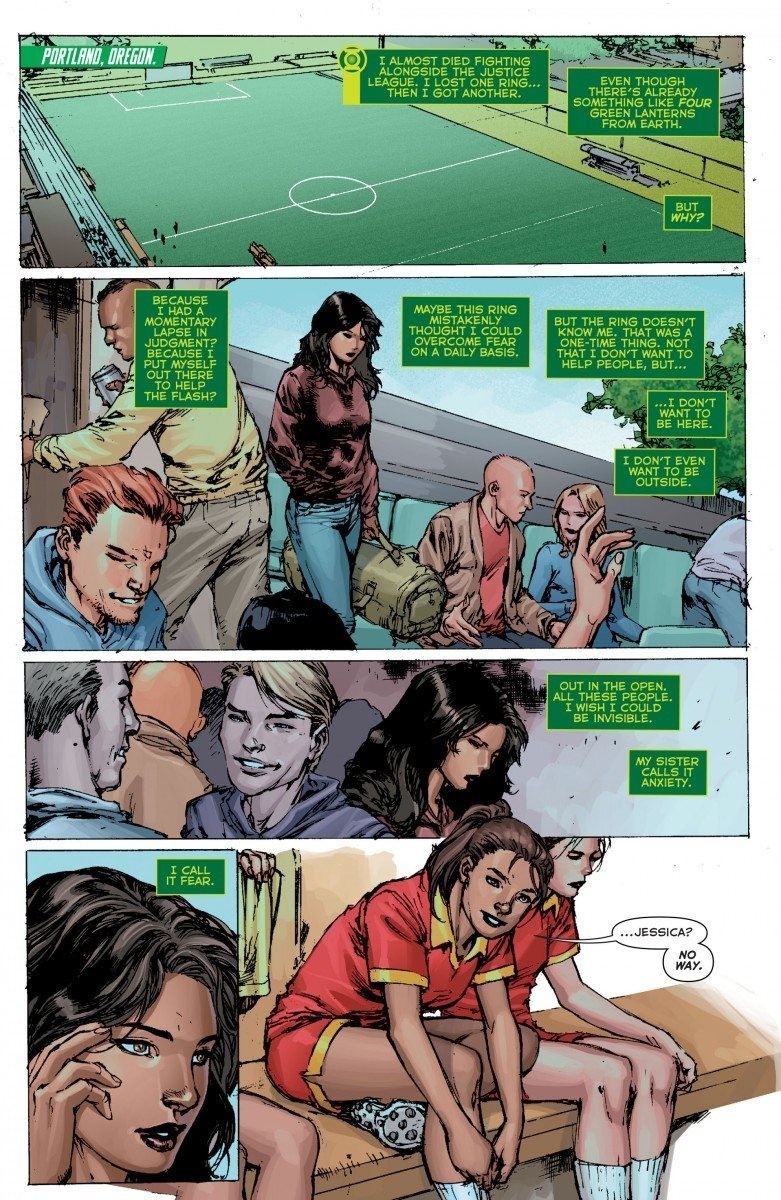 Geoff Johns is one of the best writers when it comes to the Green Lanterns. It is amazing to see him return after ending his nine-year run on GREEN LANTERN back in 2013. We can see his magic touch in GREEN LANTERNS REBIRTH #1 as he and Sam Humphries set up the new adventure for Baz and Cruz. Johns and Humphries give us a backstory to these two new Green Lanterns, but instead of recapping their respective paths to wielding the green light, they masterfully show us the emotional journey they went through to get to becoming rookie Lanterns. Simon Baz is still dealing with bigotry and being called a terrorist. Meanwhile, Jessica Cruz is confronting her fears of being outside and around others.

READ: What happened to Jessica Cruz? Learn more about her in our JUSTICE LEAGUE #50 Review!

After the character introductions, the story the writers get into works so well when Simon Baz and Jessica Cruz are put together. Their meeting works on two fronts. First, to partner them up as the Green Lanterns of sector 2814. Second, to test the two rookies for their journey and development ahead.

Speaking of what is in store for Baz and Cruz ahead, Johns and Humphries dedicate only a few pages to this looming danger. Curiously, a Guardian is on the run from a horde of aliens. He carries a box that, through narration, is described to be a powerful weapon of some kind. That’s all the writers give us, and I, for one, am intrigued. Whenever there is a guardian involved, the story is usually epic in scale. Hal Jordan killing Korna in War of the Green Lanterns is an excellent example. 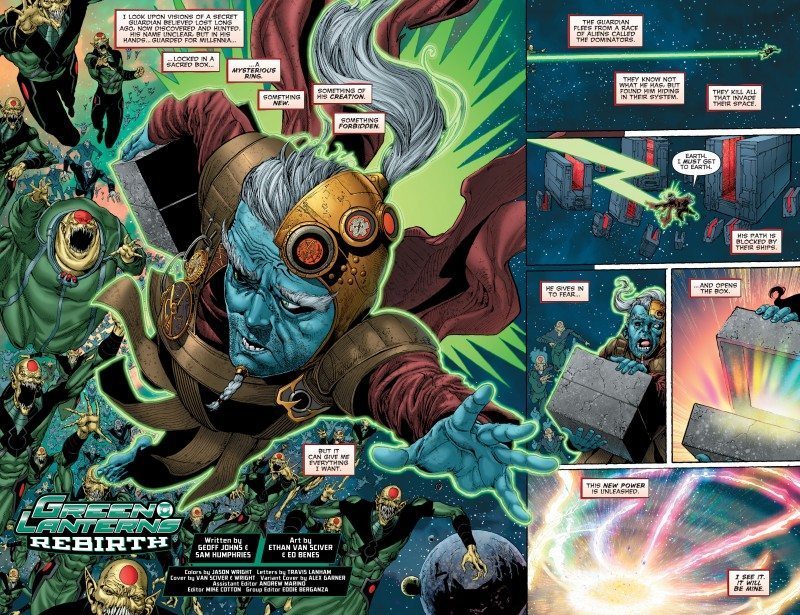 I have always been in awe of the art within the Green Lantern titles. Because the power rings can create anything that a lantern can imagine, the possibilities of what could be drawn are endless. With that said, I am pleasantly surprised by the both the constructs and action in GREEN LANTERNS REBIRTH #1. Ed Benes and Ethan Van Sciver’s art allows for the rookies to show their limited experience as Green Lanterns while still showing their ability to create amazing constructs in a fight. 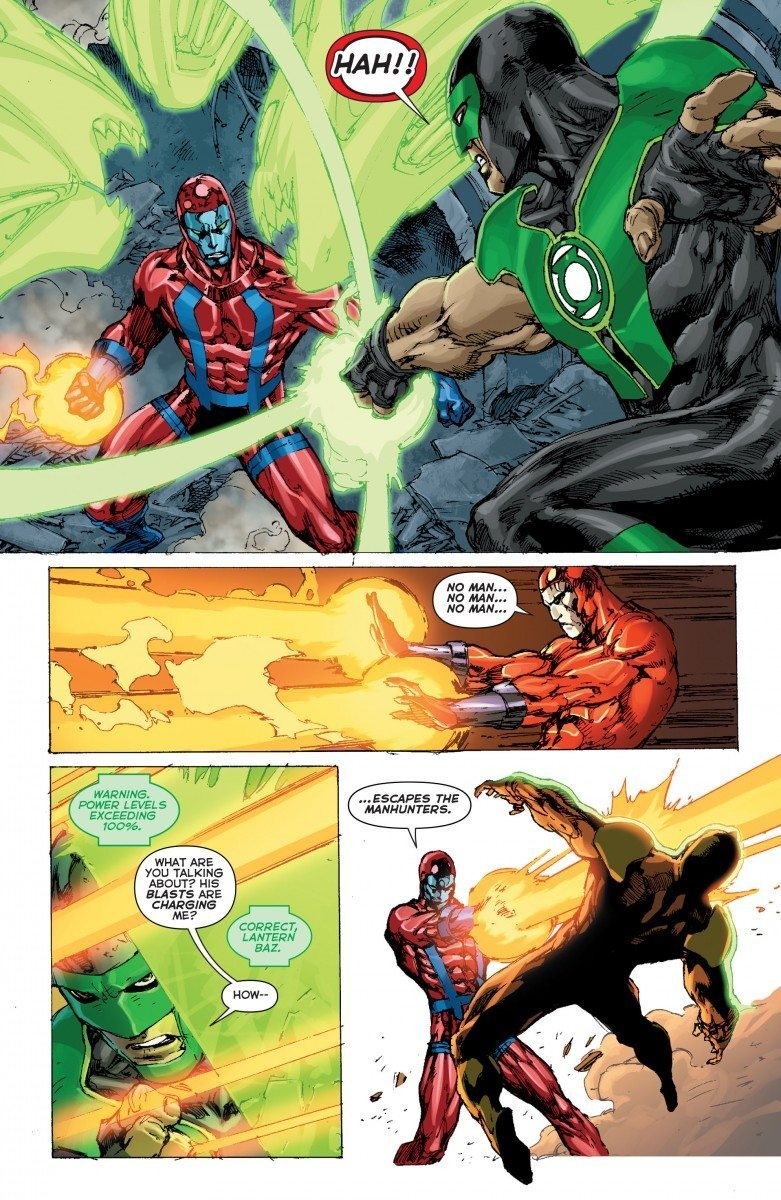 GREEN LANTERNS REBIRTH #1 does a great job at introducing and building the two new Lanterns, who have some serious chips on their shoulders, through the writing and art. I also really can’t wait to see what’s in the Guardian’s box and how it will involve Baz and Cruz. It seems like a powerful and desired weapon of some sort, and it looks to be the first test for the rookie Green Lanterns.