It’s a special Halloween edition of GREEN LANTERNS! Jessica Cruz and Simon Baz spend some platonic quality time together as they go trick-or-treating with the Baz family in GREEN LANTERNS #8. They blend in perfectly with their Lantern uniforms, but they’re not the only ones…

Previously in GREEN LANTERNS #7, with the Red Lanterns threat at an end, the rookie Green Lanterns took the day off from their policing duties and baked cookies. While Baz and Cruz were getting along, the Guardian of the Universe Rami fled the house after sensing an incoming threat for his Phantom Ring!

READ: Refresh your memory on GREEN LANTERNS #7 right here with out review!

Writer Sam Humphries shows more of Baz and Cruz’s playful side in GREEN LANTERNS #8, as he did with the previous issue. It’s not in every DC Comics series that we see the title characters go out with their family to trick-or-treat while also tracking down a powerful being with an even more powerful item. Though it might be a bit tedious to go door to door for candy while looking for Rami, it adds a comedic element to the issue by taking a poor approach and reinforces Baz’s desire to be with his family. They are one of the reasons he fights as a Green Lantern after all. Humphries also adds a threat to the issue in the form of the Dominators. They’re not that big of an obstacle, but they act as a strong way to prompt Rami to tell Baz and Cruz about himself and the Phantom Ring. 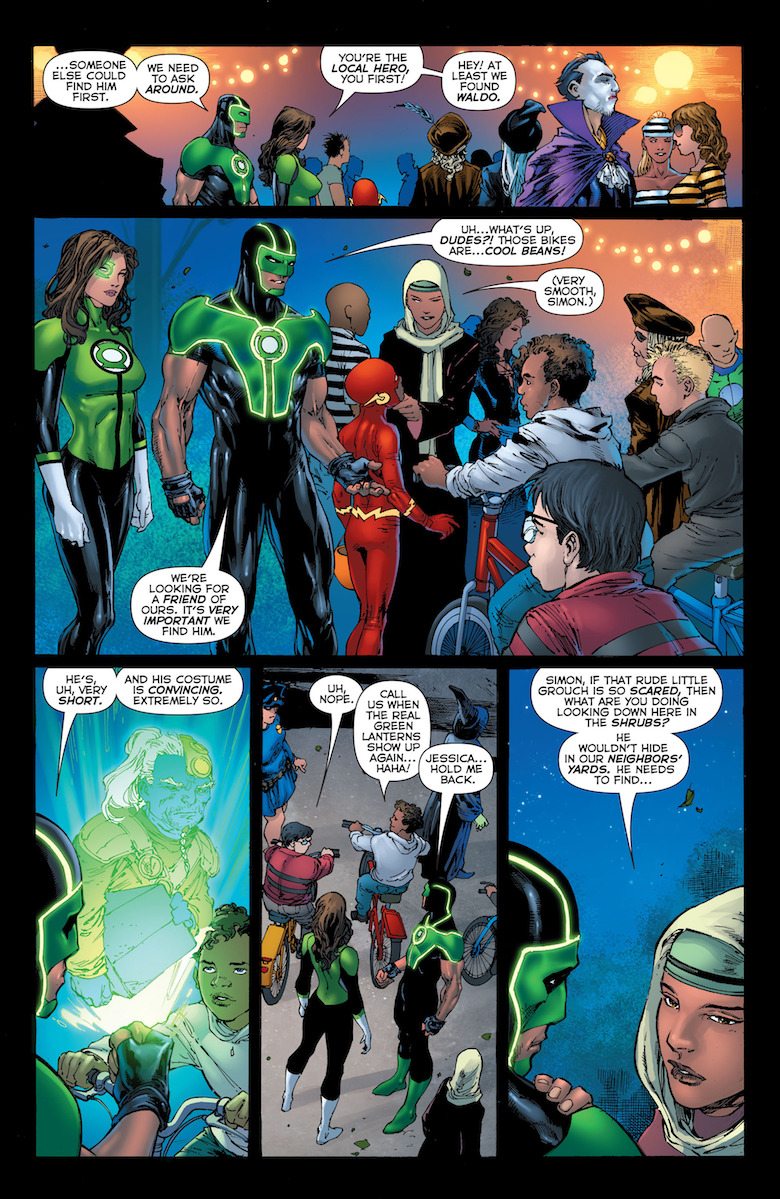 GREEN LANTERNS #8 accomplishes building up the relationships of the characters. Cruz gets closer to Baz by spending time with his family and stocking up candy on Halloween. Going trick-or-treating is such a normal event that it results in a simple and subtle way for Humphries to get the rookie duo to spend more time together. It reminds me of getting together with my friends as a kid and doing what friends do. Hal Jordan wants them together and it looks like it’s working out. This isn’t the only relationship starting to come together. The rookie duo are trying to get to know the Guardian Rami and help keep the Phantom Ring out of enemy hands, but it has been more difficult than it seems. Rami hasn’t been convinced of Baz and Cruz’s abilities, and this issue makes steps to remedy that after the fight with the Dominators.

READ: What has Hal Jordan and the Green Lantern Corps been up to this whole time? Find out here!

The art by Eduardo Pansica is as fun and playful as the issue’s story. Since it’s Halloween, GREEN LANTERNS #8 is set at night. Though it’s dark, the characters are light and visible. For example, it’s pretty cute to see Baz’s nephew dressed up as the Flash. The dark setting also allows for Pansica to demonstrate his skill with shadows. There’s an impressive succession of panels where the other trick-or-treaters are shadowed so that the focus is on Baz’s nephew getting candy, but then the scene shifts to two shadowed figures before revealing them to be the Dominators.

GREEN LANTERNS #8 is a delight to read whether or not you still go trick-or-treating (I don’t know why you wouldn’t, it’s free candy!). The issue offers a solid development for Baz and Cruz’s relationship. The closer they become, the better the team will be, and so will the storylines since they will care about each other’s lives much more than before. The current arc is getting better as well with the information we get about the Phantom Ring. Everyone will be after it and it should put Baz, Cruz, and their families in danger!