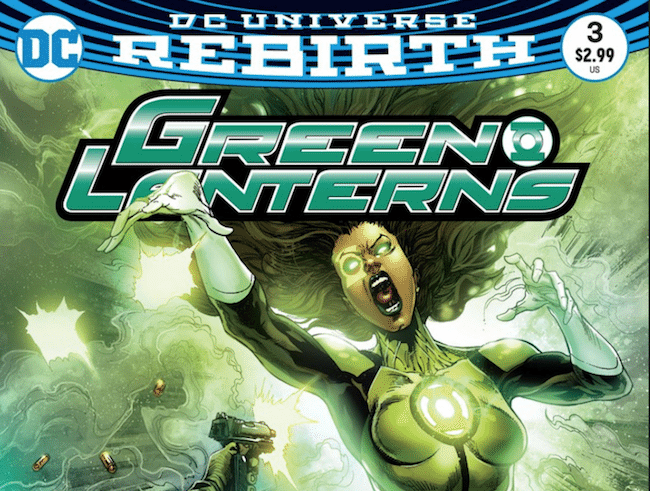 GREEN LANTERNS #3 pits the two rookie Green Lanterns of Earth against their first test with a Red Lantern! The story is well-structured with the focus on Simon Baz at the forefront of the issue. The highlight here is without a doubt the development of all characters involved in GREEN LANTERNS #3.

Previously in GREEN LANTERNS #2, we mainly followed the newest Green Lantern Jessica Cruz. With rage infecting the people of Earth, Cruz faced her first conflict as a member of the Green Lantern Corps and she had a lot of trouble harnessing her willpower. It took the urging of Simon Baz to get her to see the bigger picture: the Red Lanterns are coming to Earth and their red rage is taking over.

In GREEN LANTERNS #3, the focus shifts from Jessica Cruz to Simon Baz. The issue opens with Baz recapping the events with Jessica from his perspective. Then, the two rookie Lanterns are immediately thrown into action. The Atrocitus and his Red Lanterns have touched down on Earth and are preparing the take the planet for themselves. Their Red Tower continues to infect humans with rage at an alarming rate, which forces Baz and Cruz to finally investigate the source. However, in their way is the Red Lantern Bleez, who was sent to kill Baz and Cruz!

I was a bit disappointed with the decision to focus the previous issue on Jessica since much of the appeal of the series is the headbutting partner dynamic. However, Sam Humphries makes up for it in GREEN LANTERNS #3 with the equal amount of focus on Simon Baz. In retrospect, both of the rookie Green Lanterns have interesting backstories, so the individual issues to explore their pasts were ideal. Also, the story progression with the Red Lanterns is well-developed. The Red Lanterns are not just waiting in the shadows for their tower to infect everyone. They are making moves to take over Earth right away, which allows for immediate opposition from the Green Lanterns. 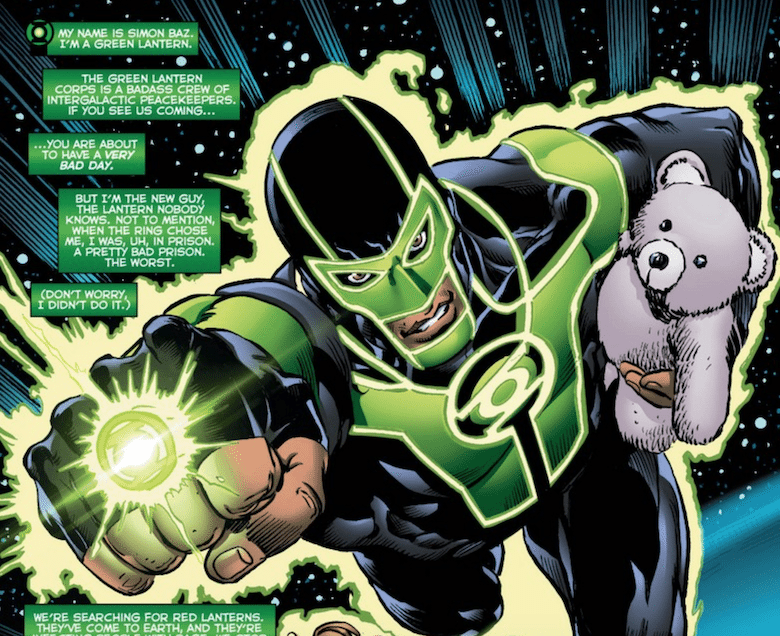 The characterization in the issue is impressive for several characters. First off, we get a look into the mind and life of Simon Baz. He fights as a Green Lantern for the safety of his family, who (like himself) have faced prejudices because of their skin color and religion. Baz is also more experienced with the power ring than Jessica is, so the fact that he can last longer in a fight with Bleez is fitting. Speaking of Jessica, her character development continues with her troubles with her willpower and creating constructs. Lastly, the biggest surprise of the issue is the backstory for Bleez. I didn’t think this would be an area that is explored in the series and I found it refreshing to get a look into one of the most dangerous Red Lanterns’ past.

READ: Go back to where Simon Baz and Jessica Cruz first partner up!

Robson Rocha’s and Jay Leisten’s art takes a step backward from previous issues. The characters Jessica Cruz and Simon Baz have less detail compared to what we’ve seen before in the series. Even Bleez is a bit bland, which is saying a lot when the character sports broken wings, red constructs, and blood that spews from her mouth. Not all is lost with the art, however, since the action sequences are well done. The fight between the rookie Green Lanterns and Bleez is as vicious as one could expect from a rage-filled light-wielder. 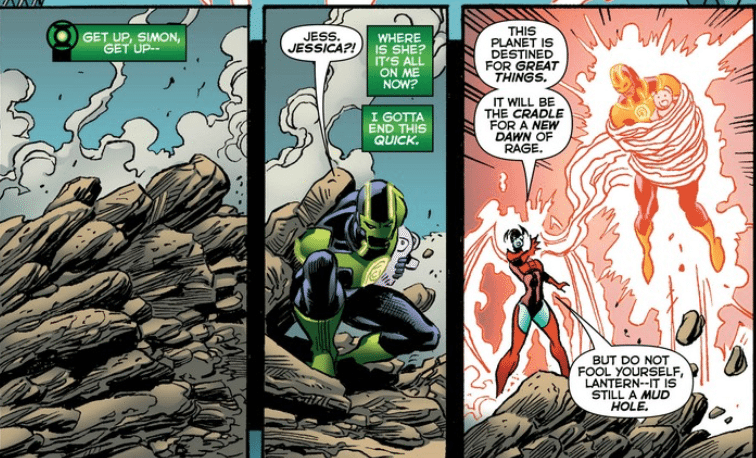 Overall, GREEN LANTERNS #3 is a good addition to the series. Getting a showdown between the Green Lanterns and a member of the Red Lantern Corps is much needed to push the story forward and put the rookies to the test. Going forward, it will be interesting to see Atrocitus’ plan unfold and see what his outlook for Earth is. Whatever his scheme amounts to, Baz and Cruz will need to get on the same page. We’ll see if they can in GREEN LANTERNS #4.