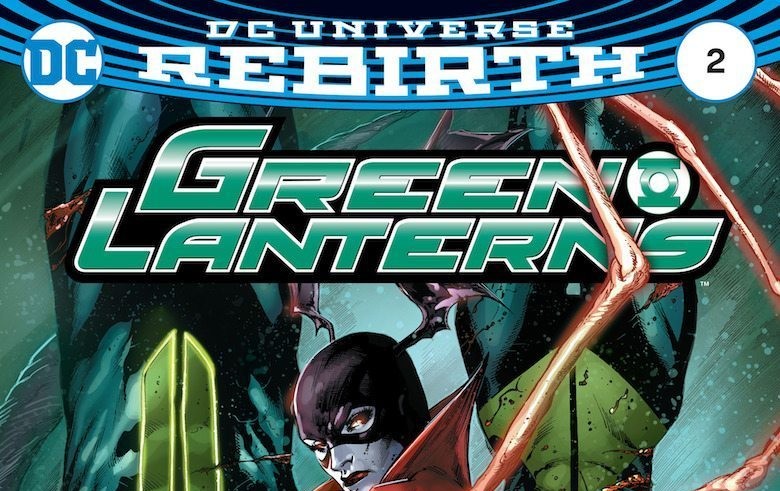 The Red Dawn is coming! Will the rookie Green Lanterns be ready?

Previously, Simon Baz and Jessica Cruz received their first taste of rage during their first outing as partners. Several humans were infected with red rage emanating from a giant red tower that erected out of nowhere. At first, the rookie lanterns had to fight a single shotgun-wielding man, but later Jessica found herself surrounded by the afflicted. Meanwhile, Simon discovered a new power he didn’t know he had:“Emerald Sight”!

READ: Learn more about the previous issue with our GREEN LANTERNS #1 Review!

In GREEN LANTERNS #2, we get a bit more on the Red Lantern’s plan for Earth—and what the Red Lantern leader Atrocitus calls the “Red Dawn.” As for the Green Lanterns, things pick up where the previous issue left off. Jessica is under assault in a supermarket filled with the infected, which includes her sister Sara. While Jessica tries to reason with Sara and stave off her attack, Simon comes to the rescue. However, Jessica refuses to leave her sister and fights her way back to Sara. 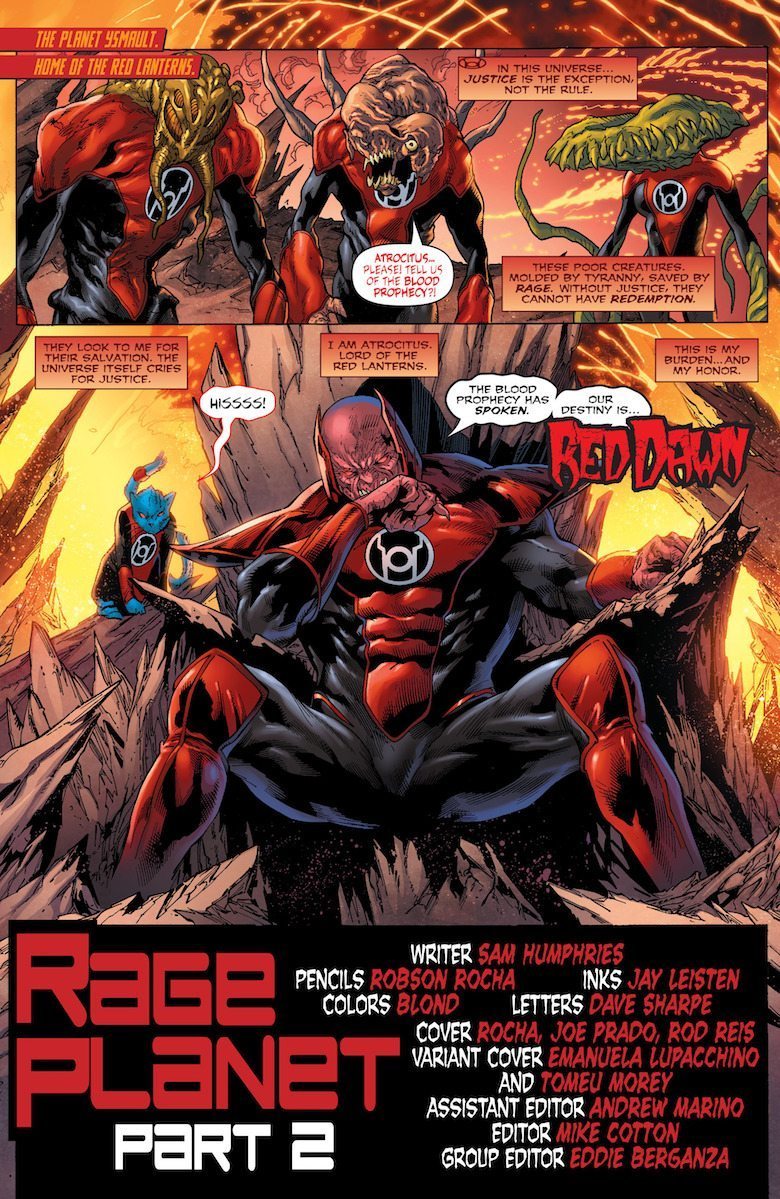 I like the buildup writer Sam Humphries offers with the story involving the Red Lanterns. It only takes up a few pages while giving a good amount of information to further the storyline. In those limited pages, we see Atrocitus as a powerful leader with an army and he unveils his necessity to invade Earth. Humphries holds off on revealing the extent of the red tower’s influence on Earth yet, which leaves readers asking for more.

Much of the issue follows Jessica Cruz and does a great job in showing her character. Humphries spends a lot of time with Cruz’s storyline in the supermarket with her sister, and with Cruz in flashbacks right after she receives her Power Ring, again with her sister. The focus seems to be on Jessica’s progress in trying to master the Power Ring. She has not been a confident character, so she seeks inner-strength in order to use her newfound powers. This development is very useful and important to appreciating the character, especially for those who have not read the new 52 JUSTICE LEAGUE series where she is first introduced. 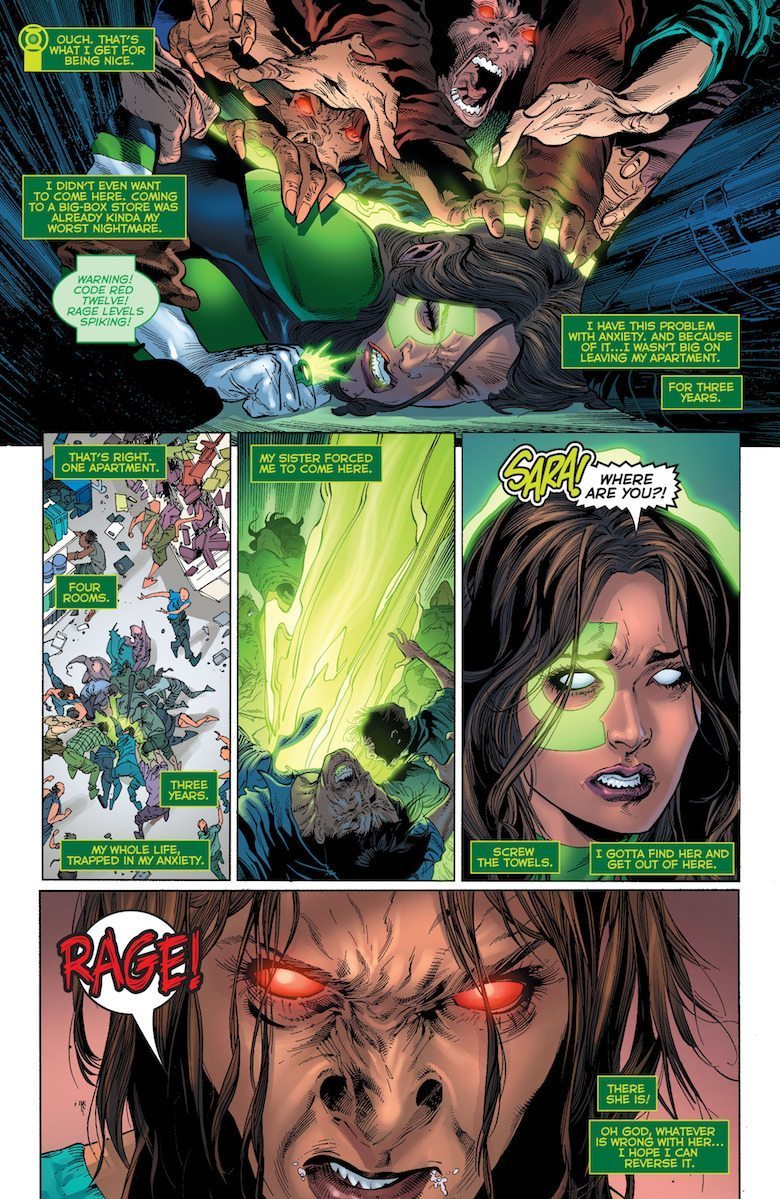 Since GREEN LANTERNS #2 is mainly a Jessica Cruz issue, there doesn’t seem to be enough space for Simon Baz in the issue. He comes to Jessica’s aid but does not do much thereafter. I would have liked to see more on Baz after GREEN LANTERNS #1 revealed his “Emerald Sight.” The new power was the thing that most piqued my curiosity and I wanted to know more about it. It is a shame that his character was neglected, but this may lead to a Simon Baz-centric issue in the future.

The art by Robson Rocha and Jay Leisten is a very pleasant sight for the most part. As the series continues, the detail of the constructs and of the Green Lanterns remains impressive. The facial features, costumes, and constructs—such as a giant green truck—are shown in a realistic fashion. However, as it has in previous issues, the art lacks detail in panels involving multiple characters as well as panels with an aerial view. There is minimal detail in these panels, which odd considering the great detail in the other panels of GREEN LANTERNS #2. 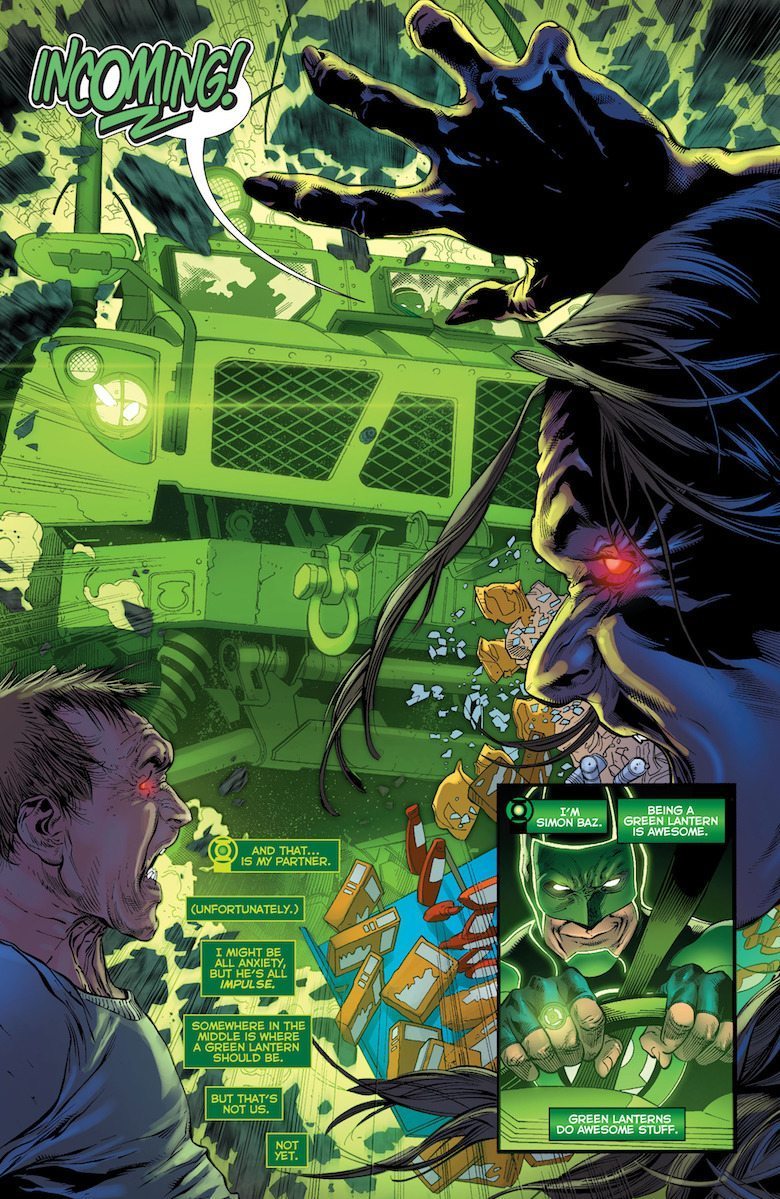 The issue builds up the ongoing threat of the red rage effectively. Though Simon Baz doesn’t get much attention, Jessica Cruz is developed significantly, to the point that the reader understands her character better. There is still a long way to go for these two rookie Green Lanterns, and the Red Lanterns will be the best test for them to prove their worth to the Corps. It’ll be interesting to see when or if Cruz and Baz get on the same page. They’re going to need to get together fast with more rage on the way.