With the end of “The Phantom Lantern Story arc” writer Sam Humphries and artist Ronan Cliquet take the GREEN LANTERNS series in another direction. Frank Laminski is no longer in the picture, so the creative team moves on to our green heroes. GREEN LANTERNS #15 is a character driven issue with the main focus on one of the rookie Green Lanterns, Jessica Cruz. 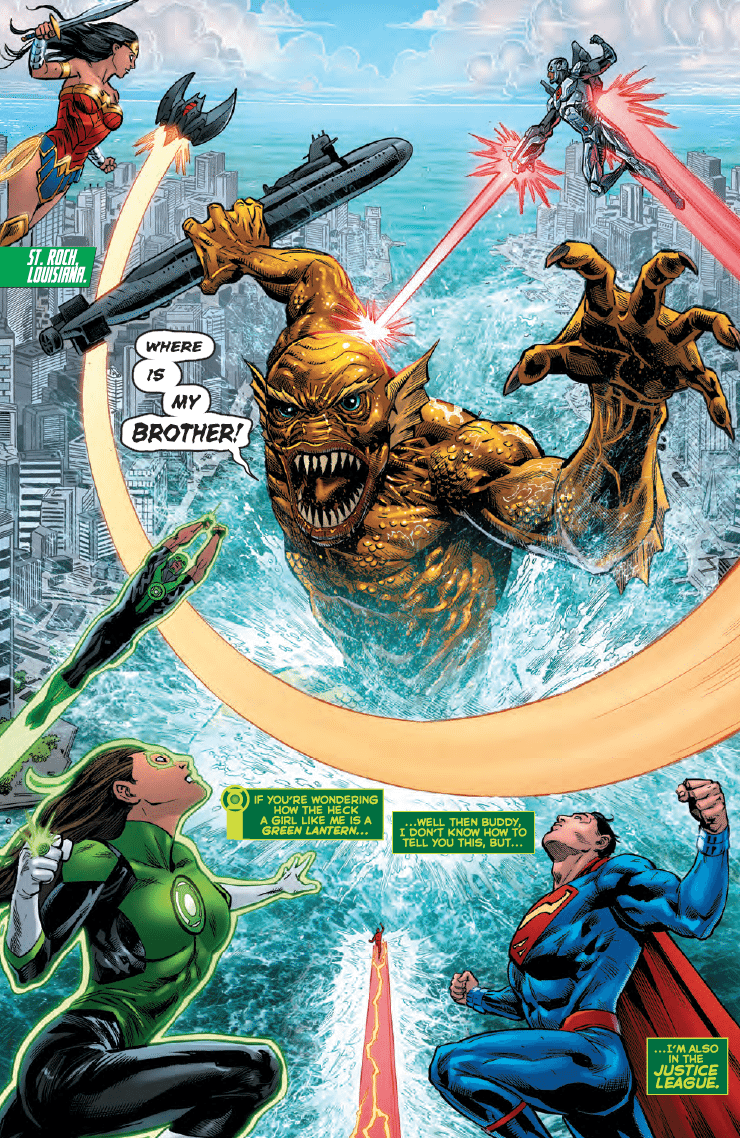 Last time in GREEN LANTERNS #14, Simon Baz and Jessica Cruz put an end to the Phantom Lantern. No, they didn’t kill him. Rather, the duo led Laminski to feel compassion (turning him into an Indigo Lantern) and as a result he relinquished the ring. Meanwhile, the discussion between Volthoom and Guardian of the Universe Rami devolved to blows. Though no one noticed, the fight ended with Volthoom trapping Rami and taking his form.

READ: Get more on the previous issue with our GREEN LANTERNS #14 Review!

From beginning to end, we follow Jessica Cruz and a regular day in her life. The issue begins the way everyone starts their day, waking up in the morning. The second her eyes open, the anxiety kicks right in, and Cruz struggles to get out of bed. She meets up with her partner Baz for breakfast, but they are quickly thrown into the fray after the Justice League calls for assistance against a large golden sea creature. From there, she and Baz help others and go on to fight a comical villain.

With the title “A Day in the Life” it makes sense that we see a full day in the life of Cruz. While a lot goes on throughout this day, much of it seems mundane. This is not to say it’s boring, but not even heroes always have days filled with excitement. However, the mundanity of this day makes Cruz seem much more realistic.

The most important takeaway from following her day is her continual fight with her anxiety. At every event, Cruz is unsure if she will be able to act. She fights with herself, questioning whether or not she can handle the situation. This self-doubt is a characteristic that absolutely defines her character. Thus far in the series, Humphries has inserted chunks of Jessica’s internal struggle with her anxiety and fear, and if you’ve been following my other GREEN LANTERNS reviews, I have always wanted more information on it. Many issues have slightly touched on the fear, but GREEN LANTERNS #15 offers a complete picture of its effect on Cruz. To finally read an issue centered around her anxiety puts a Joker-like smile on my face. It has been a long time coming.

Aside from Jessica’s anxiety being the crux of her characterization, it offers readers a better understanding of how debilitating anxiety is. At times, it prevents her from getting out of bed or acting against a villain. Some may not truly know what it means to face anxiety on a daily basis, and if they don’t, it impairs them from empathizing with Cruz’s character. Giving readers a better understanding of her fear allows for everyone to sympathize with her and, therefore, support her.

READ: What’s up with Hal Jordan these days? Find out in our HAL JORDAN AND THE GREEN LANTERN CORPS #12 Review!

As an issue that focuses on Cruz, the art does a great job of keeping her at the forefront of the panels. Cruz goes through many emotions in the issue, and they are all portrayed wonderfully by Cliquet. Her facial expressions and body language mostly convey her perpetual fears. However, Cliquet also portrays her in a much more confident light as she tries to conquer her anxiety. The art is significant beyond the focus on Cruz. There are several montages throughout GREEN LANTERNS #15 and the art perfectly depicts the time and place within the series of panels in them. This is done by the amount of light and darkness in the panels. For example, there is a page containing Cruz and Baz going from disaster to disaster in order to help. The panels and art allow for the reader to distinguish that they are different places and disasters. 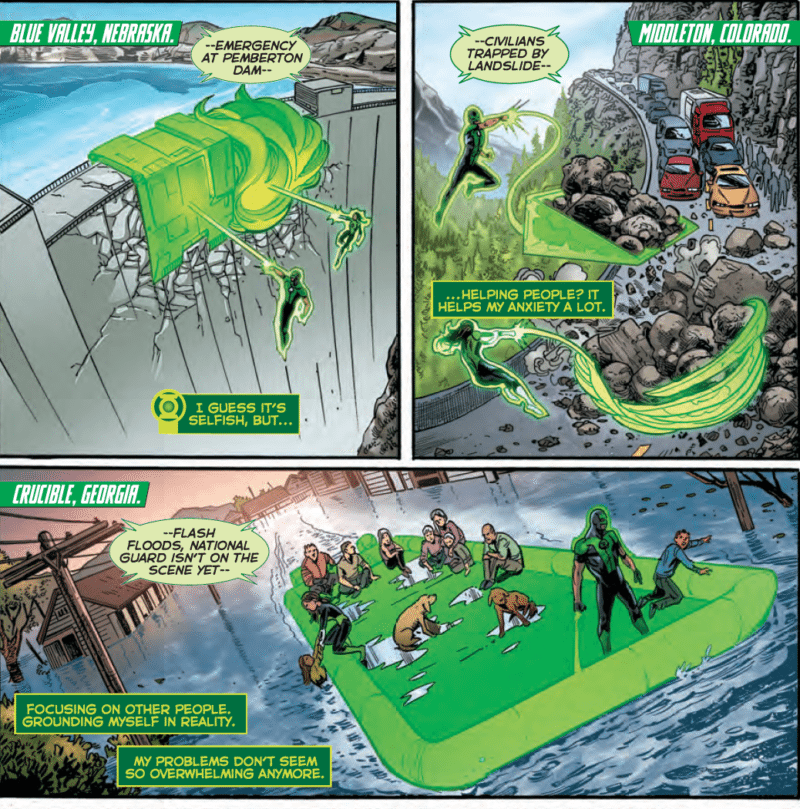 GREEN LANTERNS #15 is an enjoyable stand-alone issue. The focus on Jessica Cruz does not disappoint in the slightest as we see her inner anxiety and self-doubts. The last time Humphries gave readers an issue with a single focus on a character it was about Frank Laminski in GREEN LANTERNS #9, which led to “The Phantom Lantern” story arc. That was a story I clung to, so if there is any indication that the upcoming storyline revolves around Cruz and her anxiety, I will receive it with open arms.