GREEN LANTERNS #14 brings us to the end of “The Phantom Lantern” storyline. The creative team of Sam Humphries, Eduardo Pansica, and Ronan Cliquet concludes the fight against Frank Laminski in this satisfying installment as Jessica Cruz and Simon Baz try to put him down for good. Elsewhere, Volthoom finalizes his plan for the Guardian of the Universe, Rami!

Previously in GREEN LANTERNS #13, the Phantom Lantern brought the greatest inner fears of Cruz and Baz to life in the form of yellow constructs. The duo faced their fears and defeated their monstrous counterparts. However, Laminski proved too powerful as he continued to change Lantern Corps colors and blasted Cruz and Baz away. Meanwhile, Volthoom and Rami reminisced about their shared past and the creation of the Green Lantern Corps.

READ: Get more on the previous issue of Green Lanterns with our GREEN LANTERNS #13 Review!

Humphries begins this issue with Cruz and Baz as they witness Laminski turn into an Indigo Lantern. Suddenly, Laminski feels a rush of compassion and reflects upon the events that have transpired ever since he put on the Phantom Ring. This results in Laminski deciding whether or not he should bear the ring at all. What a way to end the fight! Less action, but an interesting self-reflection. Compassion is the only emotion that Laminski had yet to experience while in possession of the Phantom Ring. It’s the perfect way for him to lose since compassion negates his anger and narcissism. It also allows for the ring to have a safety precaution against the truly evil (they can’t continue being villainous when feeling compassion) while maintaining the strength of the Phantom Ring. 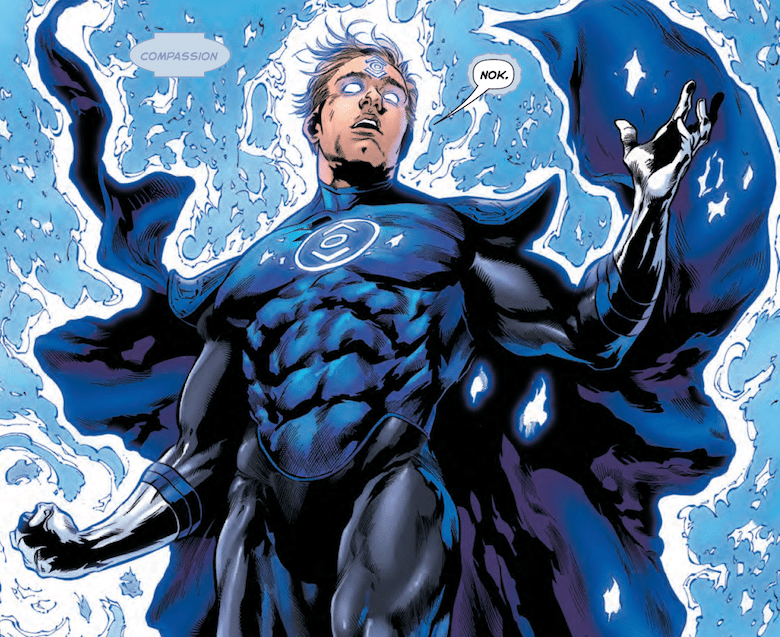 After Laminski gives up the Phantom Ring, we get to see what the Green Lantern duo is really made of as they continue to face their inner demons. Cruz is the first one to retrieve the Phantom Ring and put it on. She doesn’t want to use it for its strength, but to test her fears. Thus far, Cruz hasn’t been confident in her abilities and doesn’t believe that she should be a Green Lantern. With the Phantom Ring, she discovers that she does deserve to be a Green Lantern and has the sufficient willpower. After she gains a newfound confidence, Baz holds the ring and considers putting it on. Throughout the story, he’s wanted more power in order to become a stronger Lantern. However, in a great show of restraint, Baz refuses the Phantom Ring and chooses to believe in himself. The self-confidence of both Cruz and Baz is well portrayed in the issue. They’ve both been unsure of themselves and saw the Phantom Ring as a solution to their problems and, in a way, it was. The Phantom Ring showed them both that they’re stronger than they previously believed and deserving of their Green Lantern Rings all on their own.

READ: What’s up with Hal Jordan these days? Find out in our HAL JORDAN AND THE GREEN LANTERN CORPS #10 Review!

The art by Pansica and Cliquet is as enjoyable as it has been throughout the series. The detail and the coloring are visually stunning. Most importantly, the transitions from page to page and panel to panel are structured perfectly. The characters are given the space that’s required to tell their respective stories. The focus begins on Laminski and it stays with him as he reflects upon his actions as an Indigo Lantern. The panels move seamlessly to Cruz when she puts on the Phantom Ring and finds out whether or not she’s worthy of her Green Lantern Ring. Here, there are several close ups of Cruz picking up the ring and putting it on, followed by her experience with the Phantom Ring. Next, the panels transition well with Cruz giving the ring to Baz and the focus shifts to him. Again, there are close-ups on Baz as he contemplates putting on the ring. 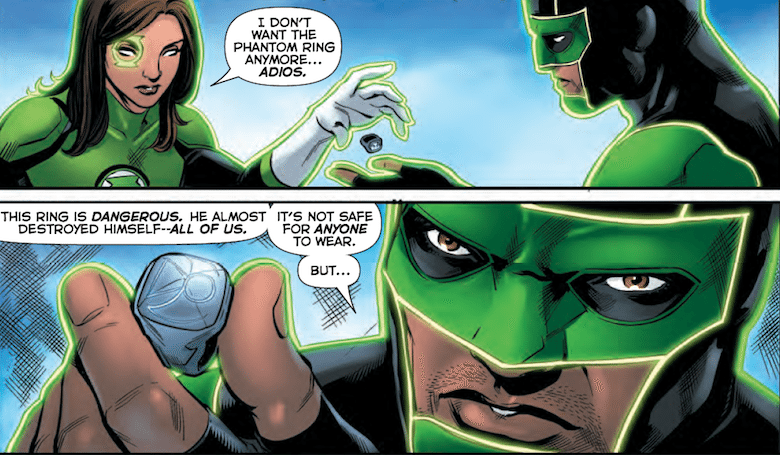 GREEN LANTERNS #14 is a solid ending to “The Phantom Lantern” story arc. Though many readers won’t be excited about an ending that isn’t action packed, I believe they’ll appreciate the logical finish. Not every villain can be taken down by force and it plays well as a learning experience for the rookie Green Lanterns. Their education isn’t over yet with the Volthoom/Rami storyline still up in the air. It’ll be interesting to see what’s next for Simon Baz and Jessica Cruz. They’re stronger and more in sync than ever, so the future is looking bright for this pair!