GREEN LANTERNS #13 is the awesome new installment to the series from Sam Humphries and Ronan Cliquet. They continue the story of Simon Baz and Jessica Cruz as they face off against the Phantom Lantern Frank Laminski. He’s a powerful foe with the support of the first lantern Volthoom. Can the rookies defeat their greatest opposition?

Previously in GREEN LANTERNS #12, Frank Laminski experienced all the emotions of the emotional spectrum through the Phantom Ring. He had seemingly attained control and harnessed his willpower to once again become a Green Lantern, claiming to be a hero. However, Baz and Cruz tracked Frank down and confronted him, which resulted in Frank losing control and becoming a Yellow Lantern. With the power of fear, Frank created monstrous versions of Baz and Cruz and forced the Green lanterns to face their greatest fears.

READ: Get more on the previous issue of Green Lanterns with our GREEN LANTERNS #12 review!

Half of the issue centers around the present with Volthoom as he chastises Rami for bringing Volthoom down all those centuries ago. GREEN LANTERNS #13 begins with a flashback to the very creation of the Green Lantern Corps. Volthoom, who was the first lantern to ever wield a power ring, became villainous, so the Guardians of the Universe decided to unleash Rami’s Green Lantern rings in hopes of finding heroes to defeat Volthoom. I’ve been waiting for some more information on Volthoom’s downfall ever since he was introduced to the Green Lantern Universe at the end of Geoff Johns’ run on the series. There has not been much on Volthoom’s origins before or even in GREEN LANTERNS, so the flashback is greatly appreciated. Getting more insight on Volthoom like this allows him to be a more impactful villain, rather than just Frank’s puppet master, since we now get to understand his goal and role in this series. It connects Volthoom to Rami with a more personal vendetta, not just because Rami had the Phantom Ring in his possession. 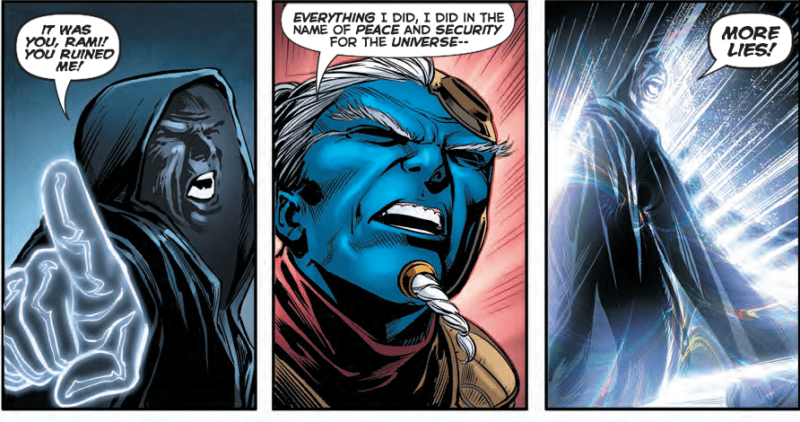 The other half of the issue focuses on the rookie Green Lanterns and their fight against themselves–well, the yellow grotesque versions of themselves and their inner fears. The battle is intense as they each take on the construct that resembles themselves respectively while the constructs taunt the lanterns with their greatest fears. This is a huge payoff from the characterization we have seen from Baz and Cruz over the story arc. They have both been insecure, as Baz believes that he is not strong enough to be a hero and Cruz thinks that she is too fearful to be a Green Lantern. Before GREEN LANTERNS #13, I was getting a bit bored with the constant display of insecurity from both characters. However, now, with the two of them facing their fears in a physical form, I’m glad that Humphries pushed the characterization as much as he did. It empowers the physical forms by making them strong enough to possibly defeat the duo.

READ: What’s up with Hal Jordan these days? Find out in our HAL JORDAN AND THE GREEN LANTERN CORPS #10 Review!

The art in GREEN LANTERNS #13 has a very cinematic feel to it. Rami and Volthoom have a heated back and forth discussion about the past and the Phantom Ring, and the panels transition like a film would. Cliquet shows us close up images of Rami and Volhoom as they speak, going from one to the other in succession with wide images for impactful moments. Also, there is a great decision to dedicate whole pages to either Cruz or Baz as they fight the constructs as opposed to showing them at the same time. This gives another cinematic feel as they each get time to truly deal with their opponent. 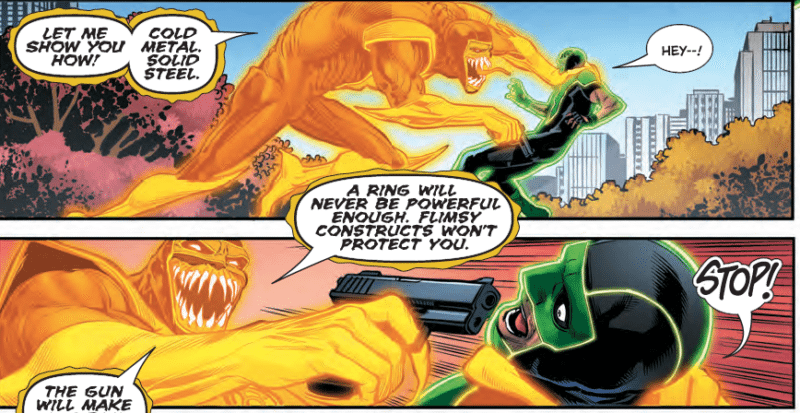 I don’t think GREEN LANTERNS #13 is a climax to the story arc, but it very well could be based on the fight between Cruz and Baz and the physical manifestations of their fears. There is much more in store for the rookie Green Lanterns in their fight against Frank Laminski and Volthoom, and I can’t wait for that climax. Rami should play a role as well. I hope the next issue gives us more about Vothoom’s plans for him.