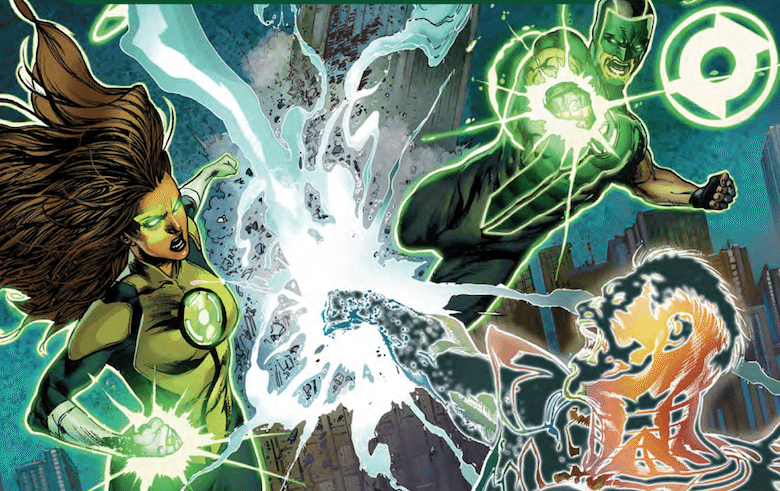 Previously in GREEN LANTERNS #11, Frank Laminski experienced the power of the Phantom Ring for the first time. Using the emotion of will, he ventured off to save the day like the hero he always believed he was meant to be. After Frank rescued a child and eradicated a tornado, Simon Baz and Jessica Cruz arrived to get the Phantom Ring and the Guardian of the Universe Rami back. Frank suddenly became possessive of the ring, and, while he felt avarice, turned from a Green Lantern to an Orange Lantern.

Writer Sam Humphries mostly focuses this issue on Frank Laminski and his experience with the Phantom Ring. As an Orange Lantern, Frank has a brief fight with Cruz and Baz, which results in Frank fleeing after the Green Lanterns are distracted. He runs away to the only entity that he associates with, the First Lantern Volthoom. While with Volthoom, Frank goes through a multitude of emotions. The emotions force Frank to change colors due to the Phantom Ring, since the bearer becomes the lantern color associated with the emotion they currently feel. This is a great way to show the effects of the Phantom Ring since Frank goes through all the emotions so quickly. The ring is not just about power, but Humphries shows the amount of control over one’s emotions necessary to wear the Phantom Ring. Also, it reinforces the need to have safeguards and the need for rings to choose their bearers. It’ll be interesting to see if Frank can handle his emotions enough to control the ring. If he does, it’ll be an uphill battle for the Green Lanterns. 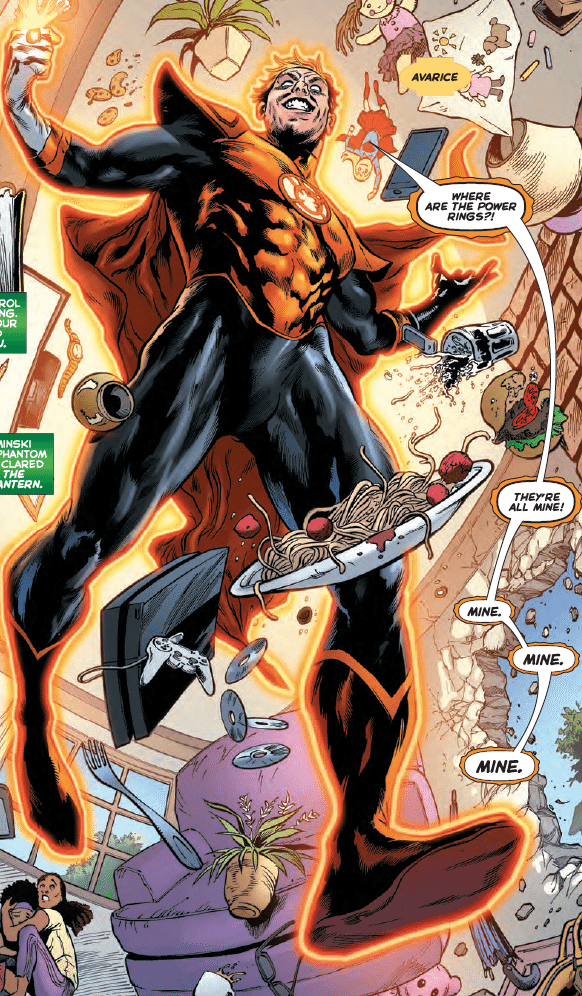 The most enticing aspect of GREEN LANTERNS #12 is the characterization of Laminski, Cruz, and Baz. Humphries adds a short flashback with Frank on a date at a carnival, watching Hal Jordan save the day. He immediately leaves to go train in pursuit of his goal of becoming a Green Lantern. The flashback reinforces his ‘dedication’ to his goals and emphasizes the things he sacrificed in his obsession. It also expands on a hinted reason for being a hero, the fame associated with it. After seeing the attention Jordan received, he wants the same.

As for the rookie Green Lanterns, they continue to feel differently about how they want to deal with Laminksi because of their own insecurities. Baz wants to go the aggressive rout and take the ring back. He doesn’t just want to save the world from the Phantom Lantern, he wants to become the Phantom Lantern. He continues to believe that the Phantom Ring will give him the power to protect the world, more power than the green power ring will grant him. On the other hand, Cruz suggests a gentler approach to Baz; trying to talk to Laminski instead of fighting. She is afraid that one day she will go off the rails and become a danger like Laminski. If that moment comes, she doesn’t want to be attacked the way Baz wants to attack the Phantom Lantern, which puts her in Laminksi’s shoes.

READ: What’s going on with the other Green Lanterns? Find out right here!

The art in GREEN LANTERNS #12 is very well done. There is a series of pages and panels that depict Laminski changing his outfit when experiencing all the emotions in the emotional spectrum. The expressions associated with each change is wonderfully drawn with the fear, rage, and avarice clearly depicted on his face and body. Also, the issue sports fantastic coloring. Early in the issue, we see a Laminski flashback that contains a fainter coloring instead of the bright and vibrate coloring of the present. This difference in color makes it clear that the pages the reader is witnessing are in the past. 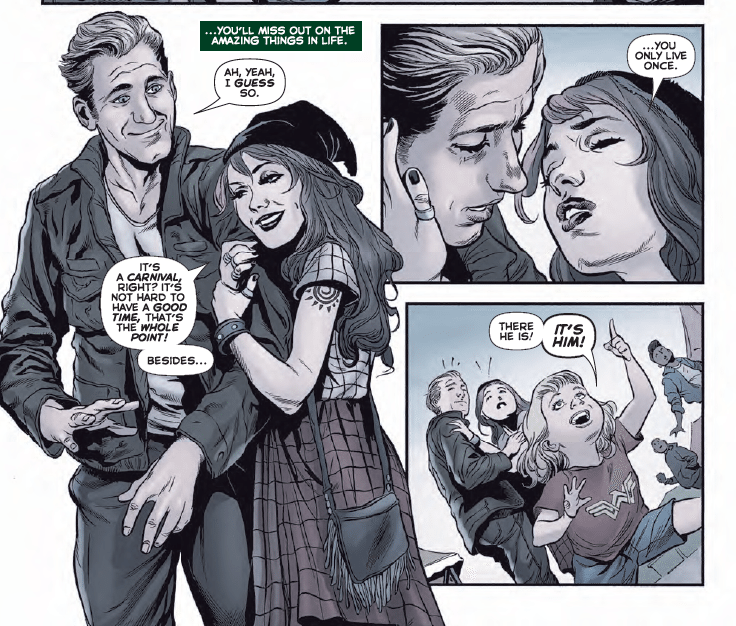 GREEN LANTERNS #12 gives us more on Frank Laminski as the Phantom Lantern. Though we do not get a long and intense fight between Frank and the Green Lanterns, this is still a solid issue for Frank’s character. The issue shows that Frank may have an Achilles heel when it comes to controlling his emotions and therefore controlling the Phantom Ring. This is something I look forward to as the story continues.