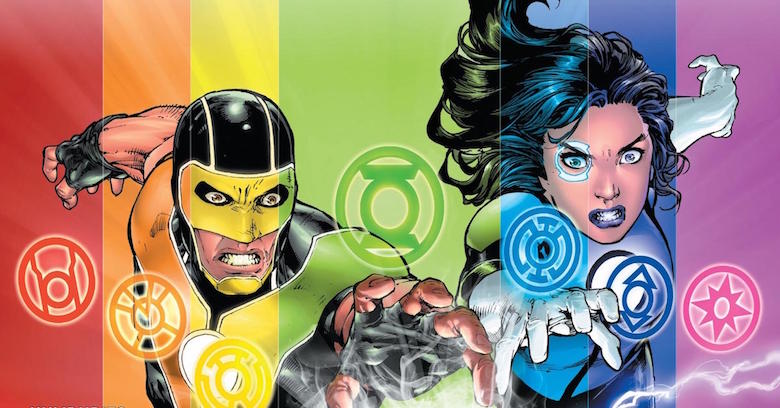 GREEN LANTERNS #10 is here, and the rookie Green Lanterns, Jessica Cruz and Simon Baz, are facing a new threat in Frank Laminksi. Frank is after the Phantom Ring, which Cruz and Baz are trying to protect. It seems like the creative team of Sam Humphries, Julio Ferreira, and Eduardo Pansica are definitely setting up one hell of a storyline that builds up a worthy villain for the Green Lanterns with impressive storytelling, characterization, and art.

Previously, in GREEN LANTERNS #9, readers were introduced to Frank Laminski. He’s a power-hungry man who wants nothing more than to be a Green Lantern after being saved by Hal Jordan in the past. Not only does he want that power, he also believes that he deserves it for all the work he has put into preparing to be a member of the Green Lantern Corps. His dreams were almost fulfilled when a Power Ring approached him, but the offer was rescinded. However, his hope was renewed when the presumed dead First Lantern, Volthoom, offered him a deal to get the Phantom Ring.

READ: Want more on the previous issue? Check out our GREEN LANTERNS #9 Review!

The issue begins with Frank Laminski planning to burn down an innocent woman’s home. His actions only serve as a distraction to get the rookie duo away from the Phantom Ring. As planned, Cruz and Baz go to put out the fire. I like how writer Sam Humphries starts off with the guy he dedicated the whole previous issue to, since there’s no wait to see how he plays into the storyline. He’s immediately the next villain in the lives of Cruz and Baz. The Phantom Ring has been enmeshed in storylines since the beginning of the “Green Lanterns” series, and we are finally seeing someone as a real threat of obtaining it. Also, creating a distraction seems like a solid plan to get the lanterns away from the Phantom Ring. However, I’m not sure the fire is a dilemma that the Green Lanterns should be concerned with. Isn’t there a fire department in town that should take care of a house fire? Granted, Baz and Cruz are still new to the superhero thing, so they may jump at every problem that comes their way. Humphries may also have this serve as a learning experience for the two of them to not get fooled, which I really hope comes into play later on. 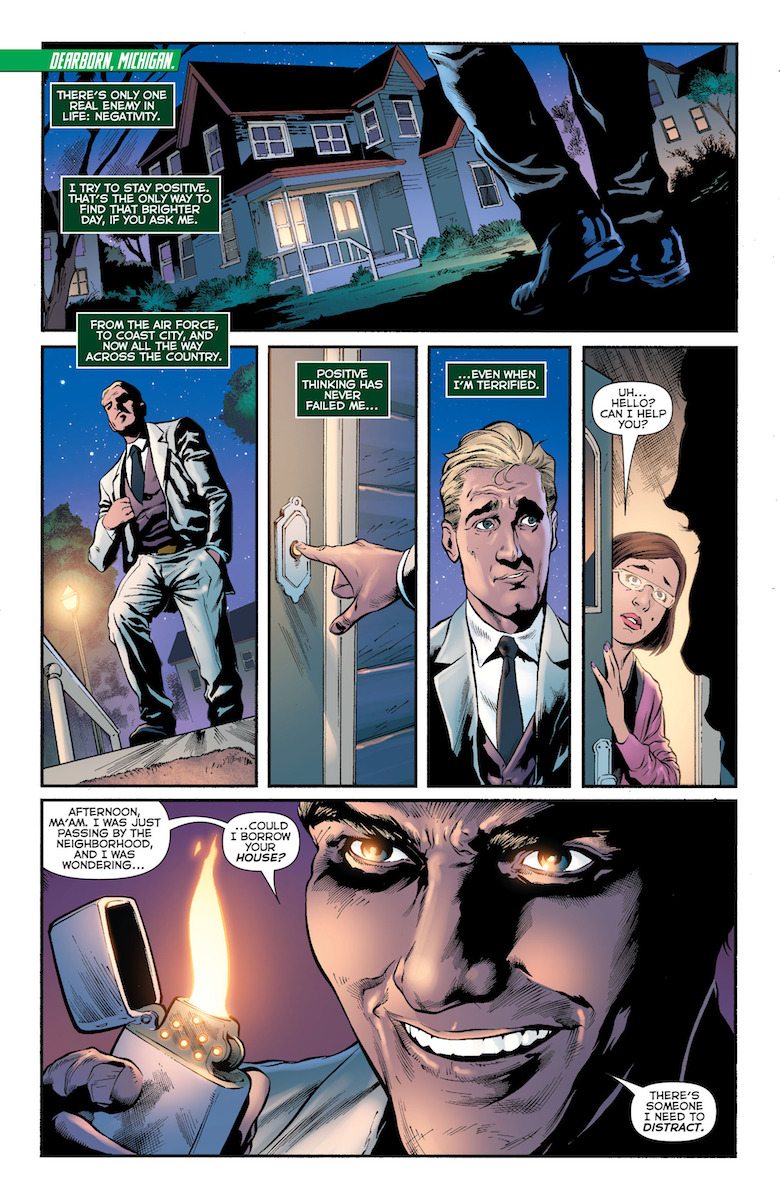 Humphries also gives a little more information on the abilities of the Phantom Ring. We already know that the ring can be worn by anyone and without the safety restrictions the other power rings have. In GREEN LANTERNS #10, we learn that the Phantom Ring has access to every power of the emotional spectrum. However, the ring can only access them one at a time. This element seems better than having all of the emotional spectrum power all at once, like the White Lantern, for a villain. I feel as though Humphries is making sure that Laminski is powerful enough to take on Cruz and Baz and a big enough threat to the universe while also allowing him to seem beatable. If the Phantom Ring harnessed all the power of each color in the emotional spectrum, the power would be beyond any lantern’s power and possibly god-like. Having the ring only use one emotion at a time, the ring’s power would be equal to any other. 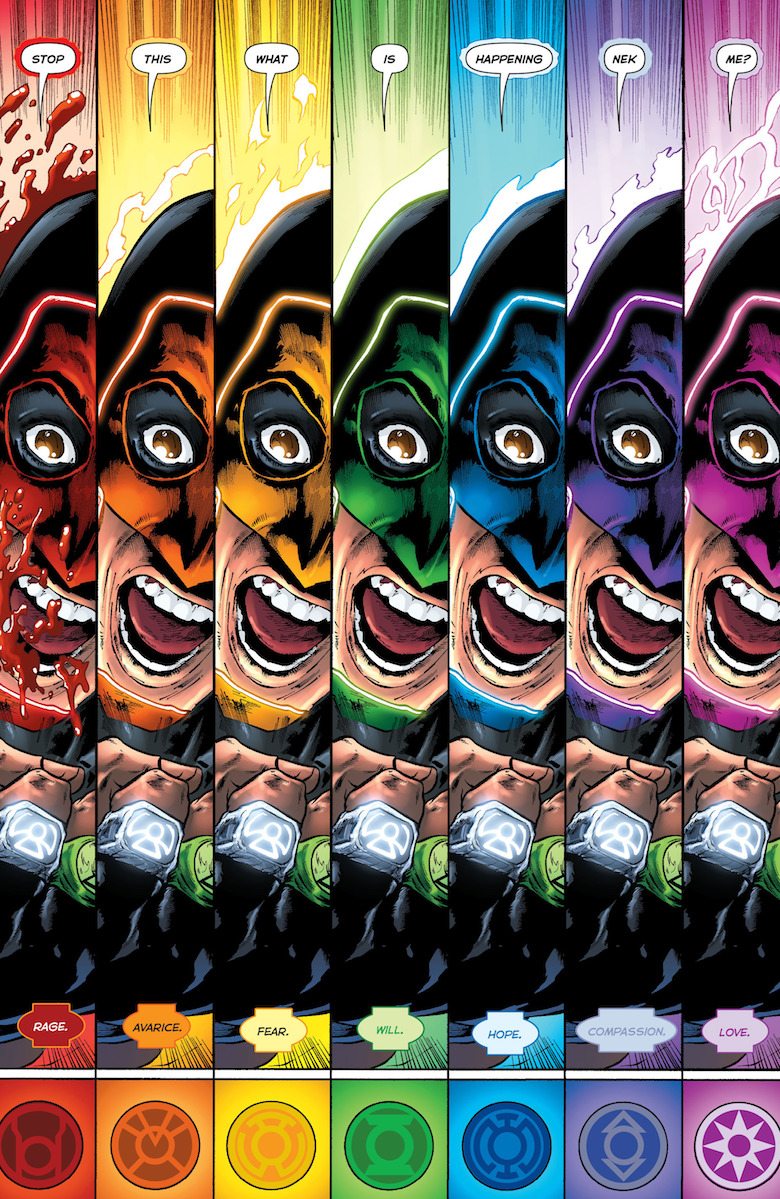 The Phantom Ring also affects the character who knows about it incredibly severely. It’s like the way the One Ring in THE LORD OF THE RINGS influences everyone who looks upon it. Everyone wants the Phantom Ring because of the possibilities it offers. For Baz, he worries about whether or not the Green Power Ring has enough power. If the Phantom Ring is stronger, then he can be a better hero with it. On the other hand, Cruz is still having trouble creating constructs and wonders if, with the Phantom Ring, she may be able to access the emotion that allows her to create a construct without struggling. This plays well into the self-doubt that Humphries has built up for Baz and Cruz. They’ve had this doubt ever since they became Green Lanterns and showing this weakness makes them more human. When it comes to Laminski, the ring is turning him towards the dark side. When he sets the house on fire, the residents are still inside, and he is fine with the possible deaths of innocent people.

READ: What are Hal Jordan and the Green Lantern Corps doing these days? Find out here!

As a whole, the story pretty much sets up the rest of the story arc. Laminski trying to obtain the Phantom Ring not only sets up the new villain in the story but works as the inciting incident that brings conflict to the story. Baz and Cruz now have to deal with an invasion on the Baz household and the attempted theft of the super powerful Phantom Ring. This is a smart, yet predictable, way to bring the Laminski/Green Lanterns conflict to a head, since Humphries has been telling everyone through the Guardian Rami that everyone and anyone would be coming for the ring, and Laminski plans on stealing the ring with the help of Volthoom.

The art by Julio Ferreira and Eduardo Pansica is impressive per usual. One of the best things about this issue were the character’s facial expressions. They are very detailed and focus in on the characters’ individual expressions at the correct moments. This is particularly true for the series of panels involving Baz and Cruz putting out the house fire and then saving the child. The art displays a range of emotions by Cruz and Baz that go from determined to confusion to relief that would put many actors to shame. 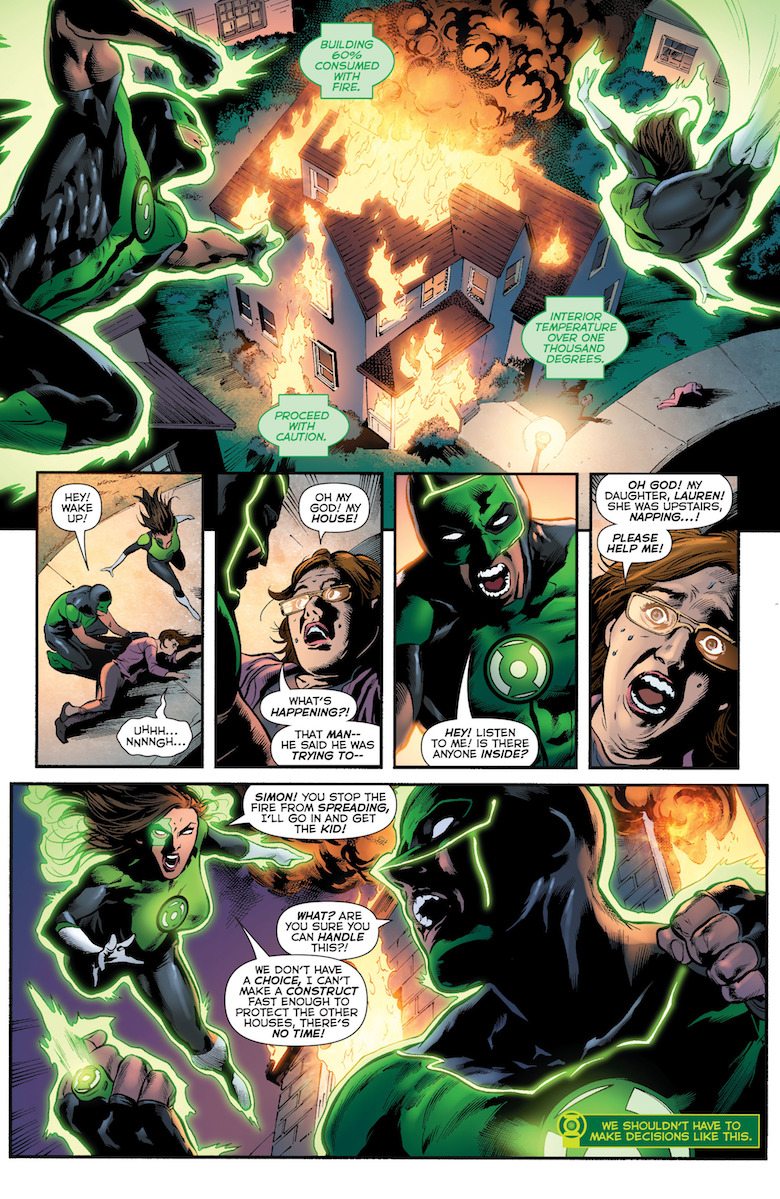 Overall, GREEN LANTERNS #10 is a well-written issue that introduces Frank Laminski to the rookie Green Lanterns, reveals how dangerous Laminski is and can be, and shows that Baz and Cruz have a long way to go before they’re each ready to be on their own as superheroes. Seems like they’ll have to learn a bit quicker since they have no idea where Hal Jordan and the Green Lantern Corps are at the moment and can’t get help. We’ll have to find out how the rookie duo handle the Phantom Ring next time in GREEN LANTERNS #11!