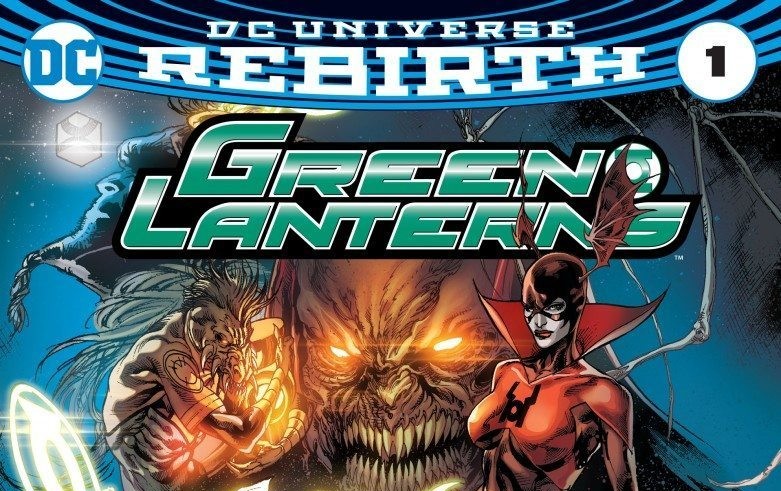 In GREEN LANTERNS: REBIRTH #1, the two newest lanterns, Simon Baz and Jessica Cruz, are partnered together and tasked with serving and protecting Sector 2814. With the Green Lantern Corps still missing in action, the universe needs as many lanterns as possible, so Hal Jordan quickly puts Baz and Cruz to the test by sending a Manhunter after them. Their failure shows that they have a long way to go to be Green Lanterns and sets up just how troublesome the partnership is going to be.

GREEN LANTERNS #1 is a strong beginning to the Baz and Cruz partnership. The issue starts with the duo receiving an alien alert from their rings, and they go to investigate. The rings send them to a house where, instead of a hostile alien, they find a man with glowing red eyes and a shotgun. Action ensues and a tower rises from nowhere, which is the source of the glowing red eyes affliction. The tower seems to be a part of a future Red Lanterns plan, spearheaded by none other than Atrocitus.

I like the decision to start small for the rookie Green Lanterns with this single threat. It allows for some professional conflict between Baz and Cruz. Baz, who is the more experienced of the two, thinks he can handle the job on his own. Therefore, he constantly dismisses Cruz’s attempts to get involved. This helps set up an evolution of their partnership, or even friendship, later on in the series, which would make for some solid character development. 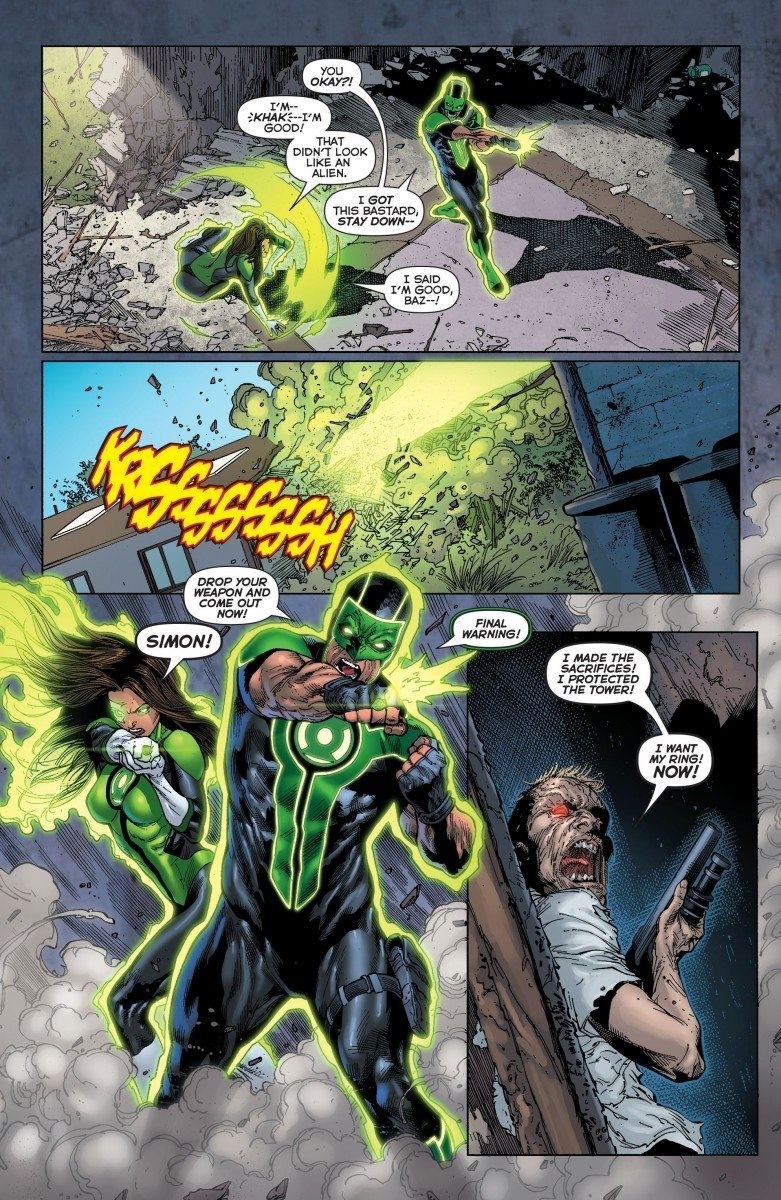 The issue also does a great job of building the story arc with the new threat of the Red Lanterns. Cruz and Baz are currently unaware, but in GREEN LANTERNS REBIRTH #1 the Red lanterns are looming in the shadows, waiting to strike Earth. This seems to begin with the glowing red eyes of rage in humans. The man with the shotgun is only a taste of what’s to come in the series. This sets up a lot of intriguing plot lines going forward. 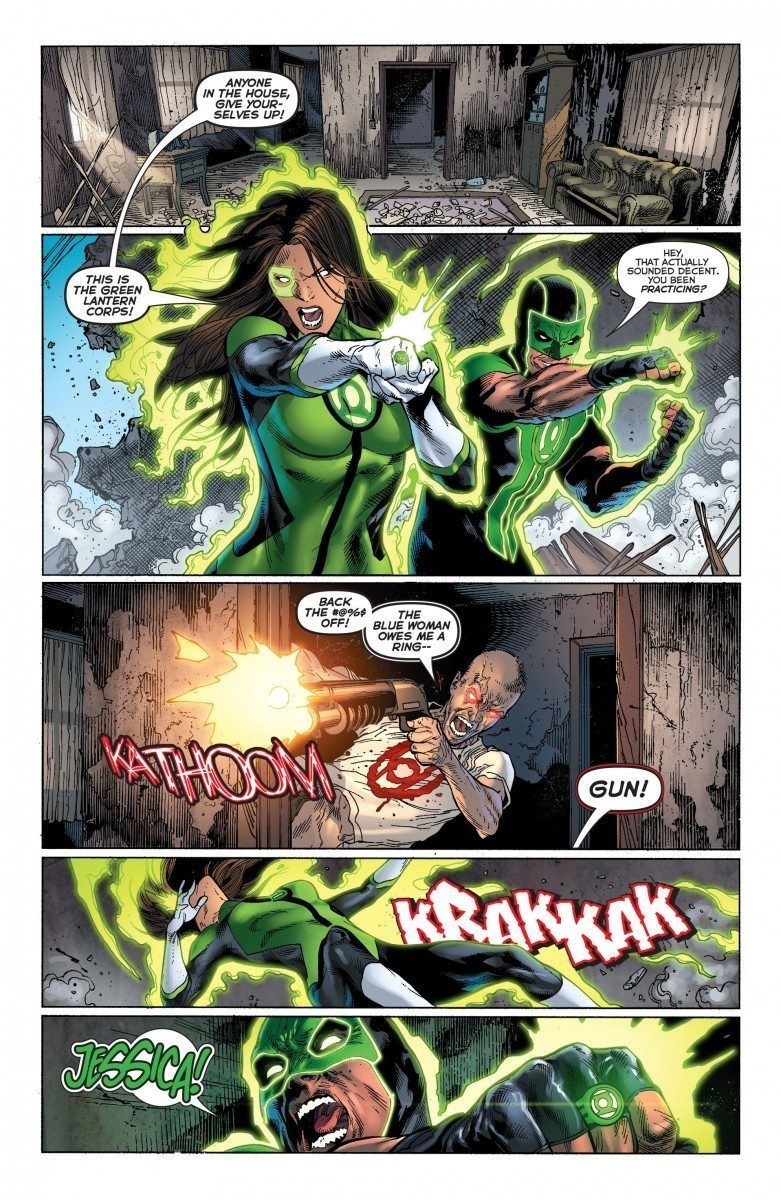 The two rookie Green Lanterns still possess their respective personal and psychological problems. I’m glad that writer Sam Humphries didn’t dismiss these character traits when they became partners since they are essential to who the characters are. Baz is still confronting the issues with being labeled a terrorist, and Cruz continues to fear public spaces (as seen in GREEN LANTERNS REBIRTH #1). I love how rage exasperates the problems both characters are facing. Baz is getting more and more enraged with every moment that he has to deal with the terrorism charges and accusations. Meanwhile, people are becoming angrier and more hostile with the glowing red eyes, which only amplifies Cruz’s fear of other people.

The art in the issue is a step up from GREEN LANTERNS REBIRTH #1. The detail on the characters by Robson Rocha is pretty incredible. Baz and Cruz are well detailed throughout the issue, but the most impressive characters are the civilians who are overtaken by rage. Their faces show obvious pain and anger after some force changes their demeanor. The only thing I don’t like are the panels depicting a wider landscape. The figures in these panels lack detail and just look like small blurred people. There aren’t many of these panels, but they distract from the previous, more enjoyable panels and artwork. 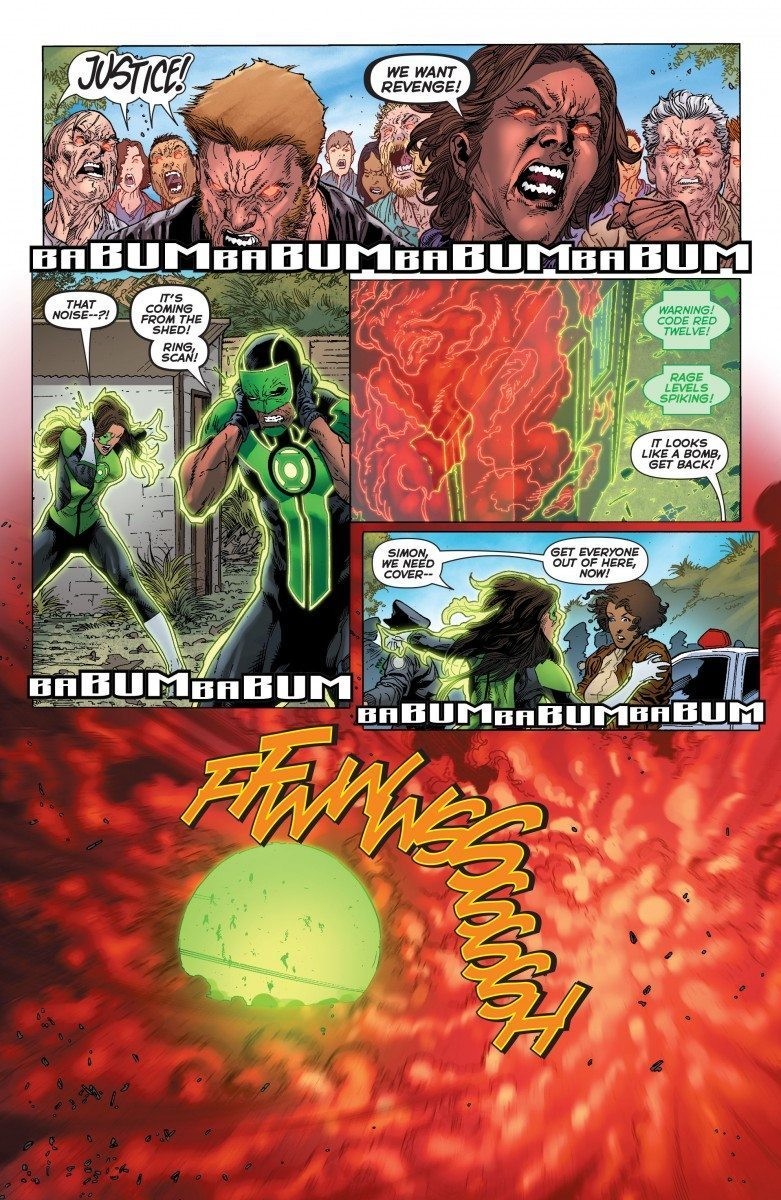 Normally, I find set ups hard to do for GREEN LANTERN related series (well unless it’s by Geoff Johns). Usually, the character backstory is thin and the threat or villain is too strong or too ridiculous. However, this is not the case with GREEN LANTERNS #1. This issue retains the rich backstory of Jessica Cruz and Simon Baz and puts these two complicated characters against a threat that will evolve in parallel with the characters’ evolution. Going forward, I can’t wait to see more of the Red Lantern’s plans for Earth and how Cruz and Baz will get along.