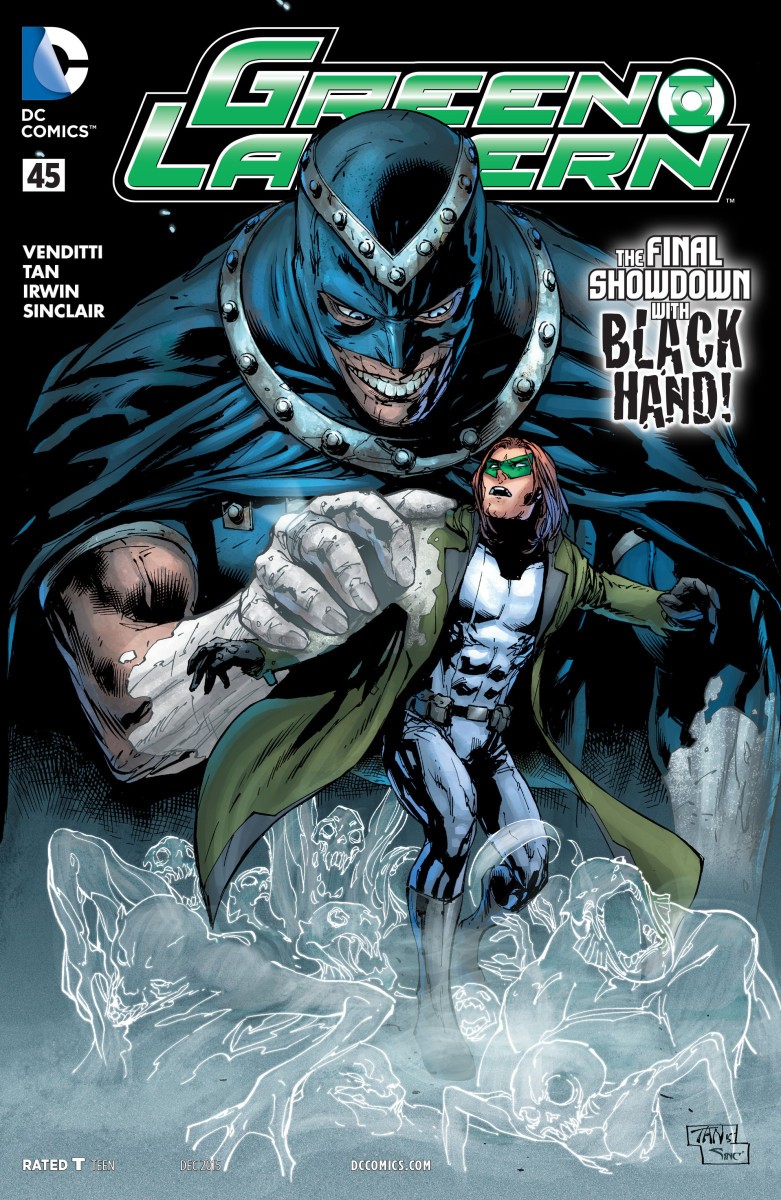 Green Lantern tracks down the planet killer, but can he stop it before it reaches Earth?

Green Lantern’s ship Darlene manages to project the next stop for the planet killer. Once Green Lantern sees where his target is headed, he says what seems to be a final goodbye to his crew. Green Lantern arrives to find another planet turned to stone by Black Hand. With his powers corrupted by the crack in the universe’s Source Wall, Black Hand is more dangerous and less stable than ever. Can Green Lantern help him? Defeat him before he turns Earth to stone? Even if he does, will it cost him is life? 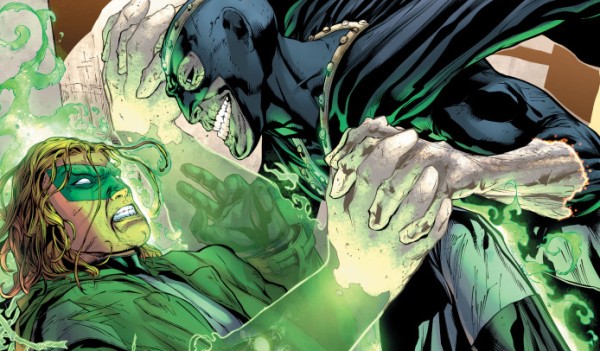 What a great issue.

GREEN LANTERN #45 is an excellent climax to this arc, and one of the finer releases of this week–and this month. The creative team trusts the work they’ve done in the last four issues and doesn’t try to do too much here. The set-up is simple: the planet killer Green Lantern has been chasing has been found, that killer turns out (even though we knew) to be Black Hand, and Green Lantern knows he has to square-off and risk his life.

READ: FEELING LOST? CATCH UP WITH ALL OUR GREEN LANTERN COVERAGE!

What makes it so effective, however, is that it’s not just a fight. Stopping Hand means something to Green Lantern beyond just that fight, beyond their history; returning to Earth means something to Hand and his need only becomes that more desperate when he sees that it’s Green Lantern Jordan standing in his way. Even if you don’t know their history (I don’t), their points of view are rendered so clearly that when they face off, you just know there’s history there. The given circumstances are clear (though implied), the desires of the characters are clear, and those desires come into conflict. This issue of GREEN LANTERN is drama in its purest form.

READ: WHAT’S GREEN LANTERN’S BUDDY, THE FLASH, UP TO? FIND OUT!

And boy is it rendered beautifully. The elegant simplicity of Venditti’s story allows the artists to really get to work, creating strong, clever images, that make GREEN LANTERN #45 a rewarding joy to experience. There are little visual treats that are a delight to find–I had to read the issue twice because I missed some and was so glad I went back. For example (I’ll only give one so you can go and find the rest on your own), Green Lantern learns fast he can’t let Hand touch him, so he uses his gauntlet to render a pair of hands so he can grapple. It seems silly when described that way, but in context, it’s very clever–and only one example of the clever visuals throughout.

Billy Tan honors the character designs of Ethan Van Sciver from the first three issues, but really makes them his own. They seem to weigh a little less, which pays off when things get really serious. You can feel the fight scenes, so credit to Tan and inker Mark Irwin for knowing just how to work together to make sure those moments really had their weight. You can feel the characters’ emotions, too, most especially, and most beautifully, in Black Hand. He’s frighteningly unstable and zips all over the emotional spectrum from panel to panel and each one is clear as day, rendered viscerally, and frighteningly. The proceedings are all illuminated gorgeously by Alex Sinclair’s colors–and is that no clearer than when Green Lantern and Black Hand square off, and Green Lantern’s warm, confident glow clashes with the bleak stone of Hand’s wrath. 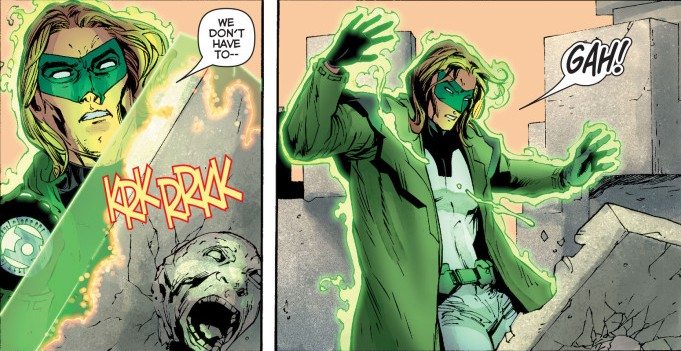 READ: REMEMBER WHEN GREEN LANTERN WAS PART OF A TEAM? SOME MIGHT EVEN CALL IT A LEAGUE?

It’s all so thoroughly satisfying, but the story’s hardly over: Hand isn’t dead, Green Lantern is still alone, and Darlene, Virgo, and Trapper are “on vacation.” Those three, by the way, aren’t just cast aside in this issue (well, figuratively–Green Lantern does leave them to go fight). Green Lantern allows Darlene the “free will” she craves, but she finds herself in the midst of an existential crisis similar to those of Trapper and Virgo. She opted to “stop and smell the roses” as Green Lantern suggested, but did it literally, creating a humorous interlude that contrasted so well with the life-and-death stakes of Green Lantern’s fight with Hand. With Green Lantern “gone”, Darlene, Virgo, and Trapper are adrift, each unsure of what to do with their lives.

Green Lantern may be able to stop Hand for now, but that would only be a detail: he would have solved a problem while the Green Lantern Corps was gone, but defeating Hand won’t bring them back. He would still alone, still be an outlaw, and still struggling to honor his responsibility to peace and justice throughout the galaxy. That’s the brilliance of the issue: the immediate plot may come to a satisfying resolution, but thematically, there are still questions to answer, ideas to explore, and if they keep producing issues like this, I will most certainly come back for more.