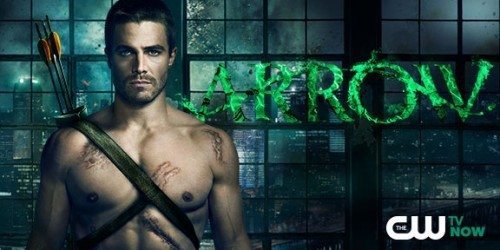 Tonight, Flash premieres, and tomorrow, Arrow is back for season 3. Here’s a really quick recap of Arrow for those of you who are new to the DC Universe on The CW.

Season one of Arrow introduces us to Oliver Queen, millionaire playboy recently discovered alive and well on an island, 5 years after he was presumed dead at sea. Upon arriving at home and reuniting with his mother and sister, he begins to take on his own personal mission- to kill everyone on a list that his father gave him.

John Diggle, once Oliver’s bodyguard, becomes a sidekick to The Hood (as Oliver’s alter-ego is called for season one) after he saves Diggle from Deadshot.

As the season continues, we see that Oliver’s ex-girlfriend, Laurel, is dating his best friend, Tommy. Thea, Oliver’s sister, gets hooked on a drug called “Vertigo.” The Hood tracks down Count Vertigo and shuts down his operation, though he appears later to wreak further havoc.

We also see The Huntress, Helena Bertinelli, in a few episodes, mostly focused on her personal vendetta with her father.

The focus of season one, however, is on what is called “The Undertaking.” This is a plan by Tommy’s father to destroy a section of Starling City, the city Oliver calls home. Oliver ultimately fails to stop the plan, and Tommy dies knowing Oliver’s secret, believing Oliver to be a criminal and murderer.

In flashbacks, season one focused mostly on Oliver’s early survival and training on the island, on which he discovers he is not alone. Eventually, Oliver meets Slade Wilson and, in season two, Sara, who he thought died in the same accident in which he got lost at sea. Oliver incidentally leads to the death of the woman Slade loves, and this guilt plagues Oliver, while Slade promises to eventually strip Oliver of everything he loves.

This is the focus on season 2, in which a scheme led by Slade Wilson (Deathstroke) is hatched to kill all of Oliver’s loved ones and eventually Oliver.

In season two, however, Oliver has more allies than ever, including Felicity Smoake (a computer genius who began helping him in season one), Black Canary (Sara, Laurel’s sister), and Roy Harper (a streetwise kid with a supersoldier serum injection). Together, this team manages to stop Deathstroke, but at the loss of Oliver’s company and mother.

Along the way, Barry Allen helps Arrow and company to solve various mysteries, and even begins a relationship with Felicity. However, a freak accident at S.T.A.R. Labs leads to a lightning strike and a months-long coma. This is where The FLash TV show will pick up tonight.