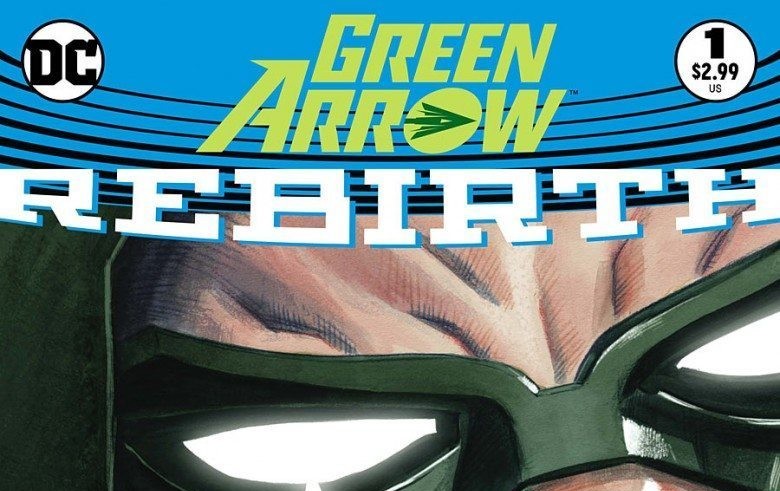 After months of rumors and speculation, DC Comics released their 80-page DC UNIVERSE REBIRTH #1 last week. The issue essentially reset the universe, folding both the classic and New 52 iterations of the DCU together. As a follow-up, this week the company began launching their REBIRTH one-shots that establish the new status quo for the line’s characters.

One of the more hotly anticipated issues was GREEN ARROW: REBIRTH, as Oliver Queen was one of the DCU characters most drastically altered by the 2011 reboot. The New 52 stripped him of his liberal ideology, the long-running relationship between the character and Black Canary was retconned from existence, and he lost his trademark facial hair. After such a drastic change last time, readers have been anxious to find out where DC is taking the character now.

READ: Get the lowdown on DC UNIVERSE REBIRTH #1 here.

GREEN ARROW REBIRTH #1 begins by immediately bringing back Ollie to his roots as a social crusader roots. He gives $100 to a homeless mother-son street performer duo, then heads into the night dressed as Green Arrow. Through his narration, Queen laments that he’s becoming more and more fed up with the socialite facade he must keep up in his civilian identity, preferring instead to battle for justice in the streets—especially because members of Seattle’s homeless population are mysteriously disappearing. He stumbles across the boy from earlier seemingly being abducted by a cloaked woman. The two battle before she reveals herself to be Black Canary, whom Green Arrow has only briefly met before. Oliver brings the two back to his apartment, where the boy informs them that his mother was abducted. 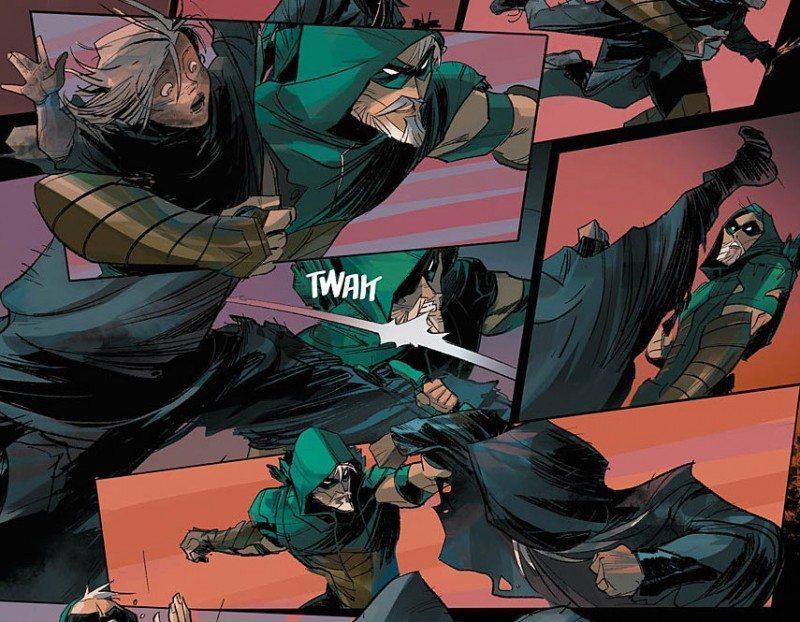 Green Arrow and Black Canary, bickering all the while, take the boy back to the homeless encampment where his family lives to try to find some answers. Before they can get any information, the shanty town is attacked by a group of severely deformed people identified only as the “underground men.” The two heroes quickly subdue them, and after a few threats involving arrows and legs, they’re able to find out that the captured homeless people will be auctioned off to the highest bidder. They shut down the auction and vow to bring the ringleader to justice. The issue concludes with Arrow and Canary properly introducing themselves to each other as Oliver Queen and Dinah Lance. 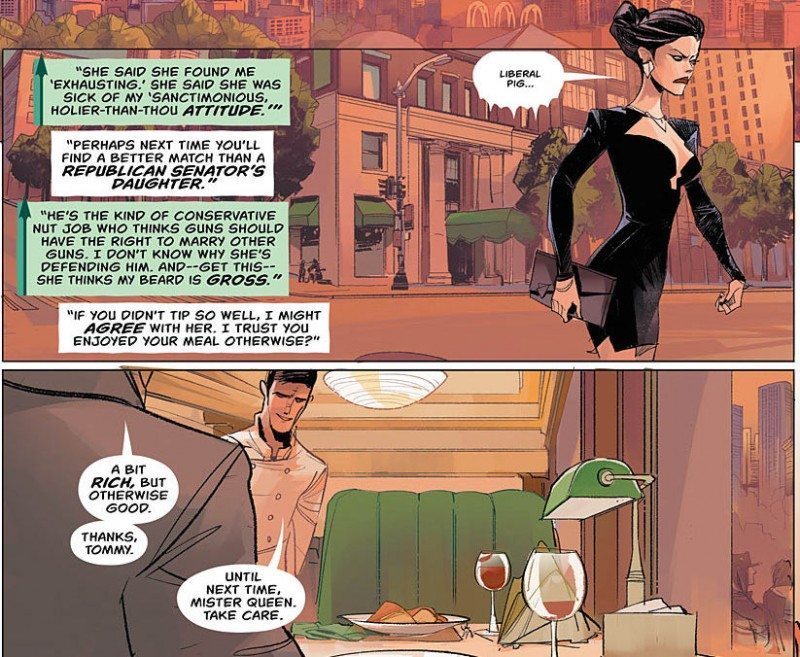 GREEN ARROW REBIRTH #1 is a mixed bag for me. Writer Benjamin Percy does a lot of things right with the character. It’s clear from the very first page that the liberal politics that long-defined Oliver Queen have returned with a vengeance. Over the course of the issue, he rails against conservatism, racism, sexism, and economic inequality, and he proudly refers to himself several times as a “social justice warrior.” While I can see some taking issue with this, especially if they disagree with the politics, I personally love it. Green Arrow being DC Comics’ resident leftist voice dates all the way back to Denny O’Neil and Neal Adams’ 1960s reinvention of the character and always made him stand apart from the other major heroes of the company’s  pantheon. It’s very refreshing to see that aspect of his personality brought back, another sign that DC is truly embracing their legacy again. 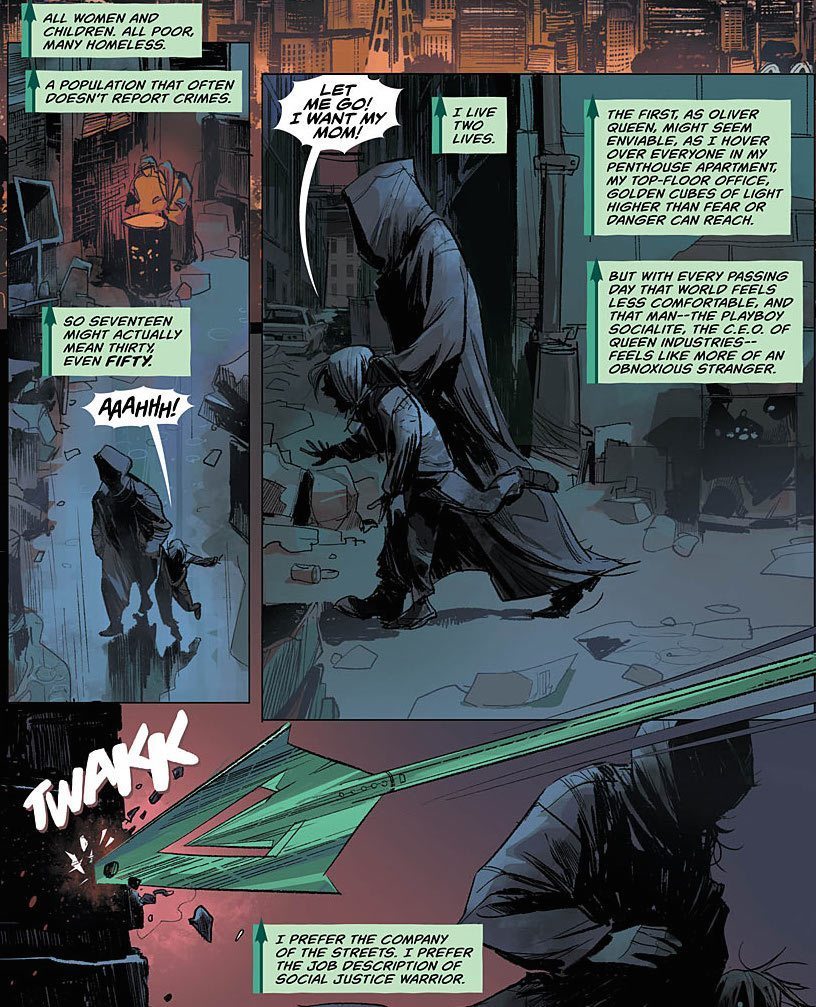 Percy also does a fantastic job handling the relationship between Green Arrow and Black Canary. Before being rebooted out of existence in 2011, the relationship between the two, often equal parts tender and contentious, had been running on and off for nearly fifty years and was beloved by a large segment of the fanbase. Because of that, I feared that the two would immediately be paired off post-Rebirth. Percy takes a much smarter approach however. He gives us the first meeting between the two, then allows them to slowly bond. Most of their dialogue is bickering, but none of it comes off as mean-spirited, leading to several organic moments of the two sharing their personal histories. This slow build makes the issue’s final identity reveal between Ollie and Dinah scene feel earned and special.

The main problem with the issue is the overall plot. It reads more like a character study of Oliver Queen (and to a lesser extent Dinah Lance) and a prelude to a future series than it does a story in its own right. The entire “abducted homeless people” narrative functions more as a vehicle to allow Oliver to espouse his political views than an actual story point. The “underground men” are left unexplained to the point that I’m honestly not sure if they were supposed to be humans or some kind of demon-like creatures. The auction climax feels rushed, and Oliver’s final threat to the villain rings hollow since we have no idea who or what he is. 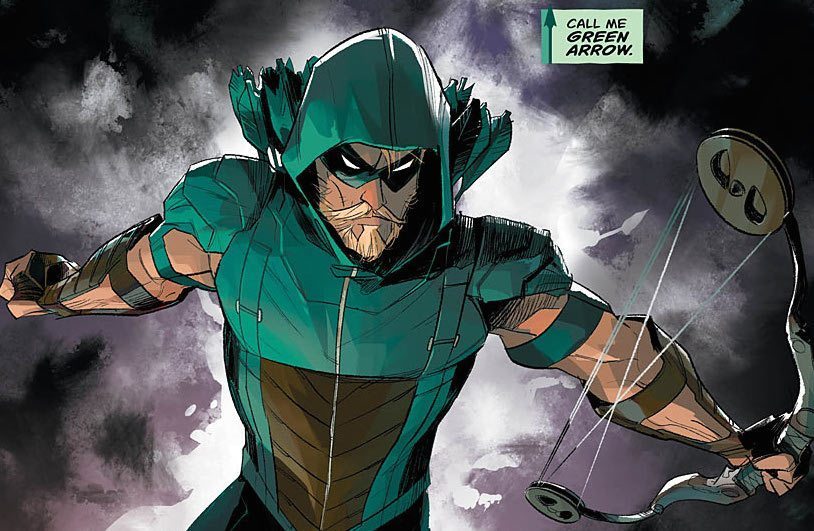 The art of Otto Schmidt has a nice gritty feel to it that pairs well with all the talk of liberal, street-level heroism. I particularly like his take on the title character, which still has some of the high-tech New 52 elements while embracing older design flourishes like the hood and goatee. My one complaint, as stated above, may have been more of a plot issue: the design of the “underground people.” They look like the villains from the classic BUFFY THE VAMPIRE SLAYER episode “Hush” with no explanation as to why.

Overall, I would give GREEN ARROW REBIRTH #1 a hearty recommendation to fans of the classic Green Arrow characterization and his relationship with Black Canary. I would simply advise that they read the issue as a character piece and prelude to the upcoming series as opposed to a fully developed story in its own right.