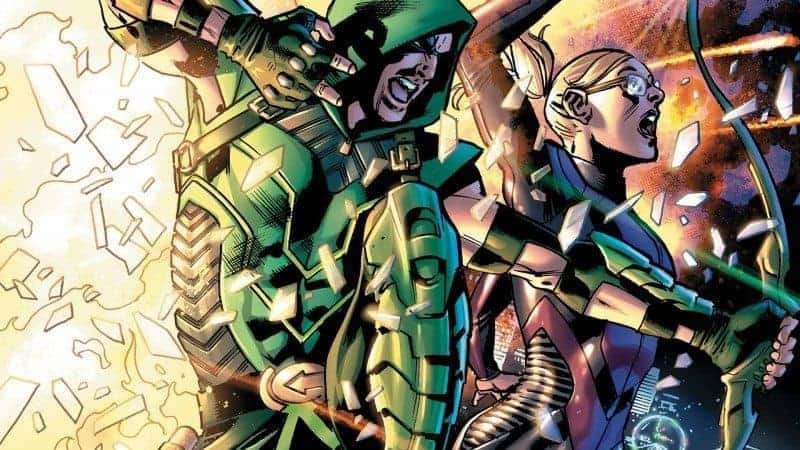 DC comics are clearly banking on the success of Arrow on the CW. In this issue we have Felicity Smoak joining the team. This version of the character is different in the sense that she has done several questionable acts in the past. Actually, the recent episode of Arrow shows that THAT version of Felicity has had a questionable past, so perhaps they’re not so different.

The issue opens with Mia Dearden stealing money from a civilian for her friend. They both get attacked by men in black suits and Mia uses her friend as a human shield and runs away. She would have been captured if it were not for the assistance of a mysterious man, who claims to know her mother.

Who are all these characters?  Find out in our blogs!

Meanwhile, the comic version of Team Arrow commence their operation of finding Mia, because Felicity stated that she was the key or chosen one. Seeing the team operate reminded me of the CW show, and that is not a bad thing. The artwork has a dark setting with a brighter hue to it, once again, not unlike the show. Team Arrow ends up finding Mia with the mysterious man who was informing her of his past relationship with Mia’s mother. The car that the two were in ends up getting attacked by the men in black suits again, this time with guns.

An impressive action sequence commences which features Green Arrow taking out the men, their car, and saving Mia all in a single go! Unfortunately, the mysterious man, who knows Mia’s mother is on the verge of death, begins telling Mia how her mother was building files and evidence that can be used to take down King (the man who ordered the men in black suits). Except… an arrow shoots him from above, killing him! The issue ends revealing the shooter to be none other than Malcolm Merlin!

Hear more about Green Arrow and the DC Universe from some of the creators in our interviews!

Positives:
– Making the comic more like the popular TV show was a wise decision and this alternate version of the team worked for me
– Amazing artwork with well executed action sequences
– Ended on an impressive reveal which did make me want to read the next issue

Negatives:
– The vagueness of Felicity when she described why Oliver needed Mia didn’t intrigue me to read the next issue, it bothered me for it being cliché
– Pointing out that something is cliché does not excuse you from using one