My biggest concern with the direction of the GREEN ARROW Rebirth run was the random plot direction after issue #8. My concerns were put to rest with this latest installment, which did a great job connecting everything. The team is back together and the island story is pretty much wrapped up. All that remains is the mystery that is the Ninth Circle, an evil organization that continues to show up and surprise readers.

Issue #9 takes us on the rescue mission of John Diggle. While tracking Diggle, Oliver and Dinah run into island native, Ata, who decides to help them recapture his island from outsiders. Meanwhile, Diggle is held captive by another island native, Ana, who happens to be Ata’s wife. Turns out the Ninth Circle isn’t as defeated as we were lead to believe a few issues ago. They have been funding a drug ring on this island that ships through the Trans-Pacific Railway.

READ: Like Green Arrow? Here’s our review of GREEN ARROW #8!

Benjamin Percy nailed the whole opposites attract theme in this issue. The married couple don’t agree on the Ninth Circle’s island involvement. Ana is “Team: Ninth Circle Drug Money” where Ata is “Team: Get The Hell Of My Land And Let Me Live In Peace.” Percy also tries to let the reader know that Oliver and Dinah are opposites as well. They bicker throughout the issue like an old married couple. For me personally, Percy failed to convince me that they’re so different. It just seems like Oliver has a big mouth and Dinah keeps telling him to shut up. They both fight crime, they both make corny quips, they’re both hot blonds… I just don’t see much contrast. 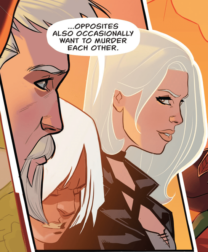 In the last issue, I boldly predicted that Dinah would end up being a robot and that this whole experience was somehow staged for Oliver. While this seems not to be the case, Percy continues to drop interesting hints towards such an outcome. Let’s take a look at the evidence. In the last issue, Dinah has an odd marking on her neck that she refused to discuss. In this issue, we again see a robot bear to remind us that robo-sapiens are indeed a thing. More importantly, Oliver points out that next to Diggle’s footprint is an oil mark, not blood. Could Diggle be a robot too? Probably not, but I do find it odd that Percy has taken the time to point out things like this over the last two issues. Maybe he is trying to misdirect readers like myself.

READ: Watching Arrow’s return to The CW? You’ll love this article about comics on TV!

On that note, let me take the time welcome back Stephen Byrne! The art has returned to its darker tones after last issue’s rom-com. Byrne is great at adding a specific callback detail during big fight commotion and the brief battle at the end of this issue is a perfect example. Do you see how many panels this arrow that Oliver shoots travels as the fighting around it continues? We are directed to almost ignore the action surrounding it and focus on where it lands. I applaud Byrne for not creating what could’ve been a simple “punch, shoot, BOOM” scene. Instead, he gives readers compelling visuals that matter to the story. 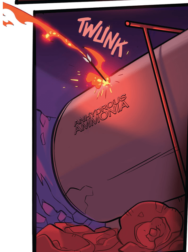 At this point, I’m really looking forward to seeing Oliver’s journey home to Seattle. There are tons of questions left to be answered. Who really runs the Ninth Circle? Can the team escape the oncoming train to get home to get Oliver’s life and company back from his corrupt employees? How will Emi and Shado tie back to the story? I trust the team behind this run to fill in these blanks because they haven’t failed me yet.