Having washed up onto a new island, Oliver is left hopeless and lost until Dinah (AKA Black Canary) appears. Don’t ask why or how, because I have no definite answers. All I know is that she and Diggle are somehow stuck on this rock with Oliver. The remainder of GREEN ARROW #8 follows the romance that is Dinah-ver. Sure we see Diggle get kidnaped by a robot bear and taken to some stranger’s lab (where he claims to run the island), but really it’s all about the love. Every page seemed to be Oliver and Dinah kissing, only to be interrupted by corny dialogue straight out of a Freddie Prinze Jr. rom-com. 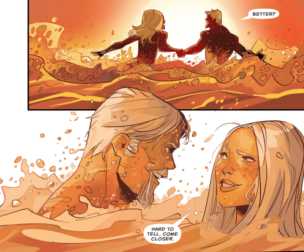 READ: Like Green Arrow? Here’s our review of GREEN ARROW #7!

Percy has impressed me with basically all seven issues in this run up to this point. That being said, I was seriously underwhelmed with this week’s story. I get that something big on this island is being set up. My theory is that this Dinah is actually a robot (like the bear) and Oliver’s gonna be in some trouble when attempting to rescue Diggle. Even with the interesting possible outcomes of this story, I still found Percy’s approach a bit odd.

This issue is more of a filler than a setup if you ask me. The love story being told through the 20 or so pages could have been done in much less. Besides, we’ve seen a similar take on it in an earlier issue at Oliver’s apartment back home. Had we spent more time on Diggle’s kidnapping, there would’ve been a nice balance between things going too right and too wrong. We can only hope that Percy has a plan for this arc, and that he can explain how Dinah and Diggle got to the island in the first place.

READ: Excited for Arrow to return to The CW? Check out this article about comics on TV!

On a more positive note, it was great to have Otto Schmidt back doing the art! I’ve said it before and I’ll say it again, the art in this run has been really great. While the first seven issues took a darker approach, this love story issue was bright and vibrant. There was noticeably less shading (dark shadows) on the characters, which worked with both the tropical weather and the light-hearted storyline. That’s a big switch to pull off; however, Schmidt made it work. Even in moments when I was bored of the story (and there’s plenty of those moments) I stayed attracted to the page because of the details drawn on every character. The issue has a moment where they are focusing on Oliver and Dinah’s scars. While that back and forth meant nothing to me, I was impressed by the details being presented through the art.

Overall, this felt like a step backwards for the run. That being said, Percy has gained my trust and I know he can make something out of this filler that will have me rereading it and noticing things I missed. Like what BATMAN V. SUPERMAN was supposed to do for MAN OF STEEL (#shotsfired). Here’s hoping next issue gets back on the right track!