Another story comes to a close in this week’s issue of GREEN ARROW. After last week’s setup, we finally see the showdown between Emiko (Oliver’s sister who betrayed him in GA #6) and The Dragon. Meanwhile, in the flashbacks, the William Tockman storyline finishes up as well. The theme of this issue revolves around the sins of the Queen siblings’ parents. The battle against the Yakuza and The Dragon is caused only by the debt that Shadow (Emi’s mother) owes. Similarly, the flashback’s villain is only after Oliver because of Robert Queen’s debt. In both stories, Emi steps up and decides to care for someone other than herself.

READ: Like the green hooded hero? Check out our review of GREEN ARROW #6!

Let me take some time to discuss Benjamin Percy’s fantastic writing in the series thus far. I cannot express how impressed I am that this man took a couple issues off from the main storyline (The Ninth Circle and Oliver back on the island) to give more depth to a smaller character like Emiko Queen. This decision will help tremendously moving forward because readers like myself are now connected with Emi and her character’s tremendous pathos and development. We watch a somewhat selfish little girl grow to care for others in just 2 issues. Emi not only makes up for her betrayal of Oliver, but she does so by risking her own life. This shows brilliant writing on Percy’s behalf. The vision he has for both past and present growth of main characters is refreshing to the GREEN ARROW comic universe. Now that we are back to the island, I look forward to see how Canary and GA move forward. 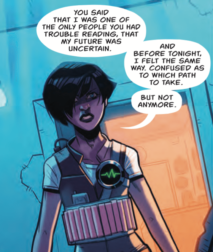 READ: Need help deciding which Rebirth titles to read? We can help you pick the best ones!

Great news for those who are still on the fence about reading this issue… Stephen Byrne is back on the art! After a fantastic issue 6, Byrne has outdone himself with such beautiful facial detail and dark scenery. Both the flashback and the present story are shown in the same gritty tone, yet they are given distinguishable coloring so readers can understand which scene they are in (blue tints for the flashbacks and red for the present Yakuza scenes). It is worth crediting Neal Adams as well for his cover work on this issue. I love the vibrant city that he displays. Now back to Byrne, who tops it all of by placing a side by side scene of the past and present (still in separate blue and red). It was a beautiful way to end this short story. 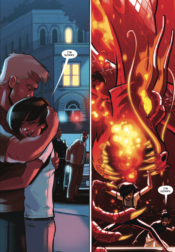 Overall, I cannot wait for the rest of Percy’s story and, who knows, maybe a potential shift in artistic tone to something a bit lighter? It is a great time to be a Green Arrow fan with not only this fantastic Rebirth, but also the show returning on the CW (hopefully back to its street level roots form earlier seasons). ComicsVerse and GA fans, be on the lookout for my article on what I want in Season 5 of GREEN ARROW in the next few weeks!