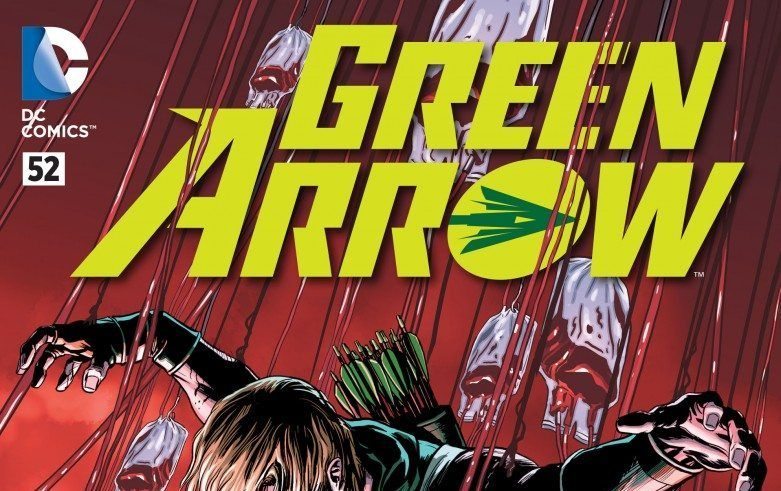 It’s the end of the GREEN ARROW! Issue 52 brings the epic conclusion to the conflict between the people of Seattle and the Wargs (people infected with the Lukos Virus). The Berserkers (Lukos infected who embrace the disease) have been at war with the non-infected Patriots. Not only that, but Oliver has been infected as well. This issue serves to answer these problems, but does so in rushed fashion. The conflict during the virus becomes too easy and anti-climactic. However, the art and characters are strong elements of GREEN ARROW #52.

In GREEN ARROW #51, Oliver, Emiko, and George travel to Africa to look for Doctor Miracle so he can cure the Lukos virus with his blood. However, they are captured (along with Doctor Miracle) by Oga. They are all released when Deathstroke, who had been hired to get Miracle by Blood Bag, takes out Oga and his army. While trying to stop Deathstroke from kidnapping Miracle, Green Arrow is stabbed and presumably killed.

The plot in this issue is a bit disappointing. There were a lot of questions to answer in issue 52, and the story wraps up rather quickly—too quickly for my taste. Since Oliver is thought to be killed by Deathstroke, the issue has to bring him back somehow. This is accomplished a bit lazily by stating that Miracle’s blood was still on a knife and it healed him. It’s classic comic hand-waving, but it doesn’t make much sense. The same weapon had just wounded Oga, likely cleaning the knife of Miracle’s blood and, in any case, meaning that Oga would also be resurrected. 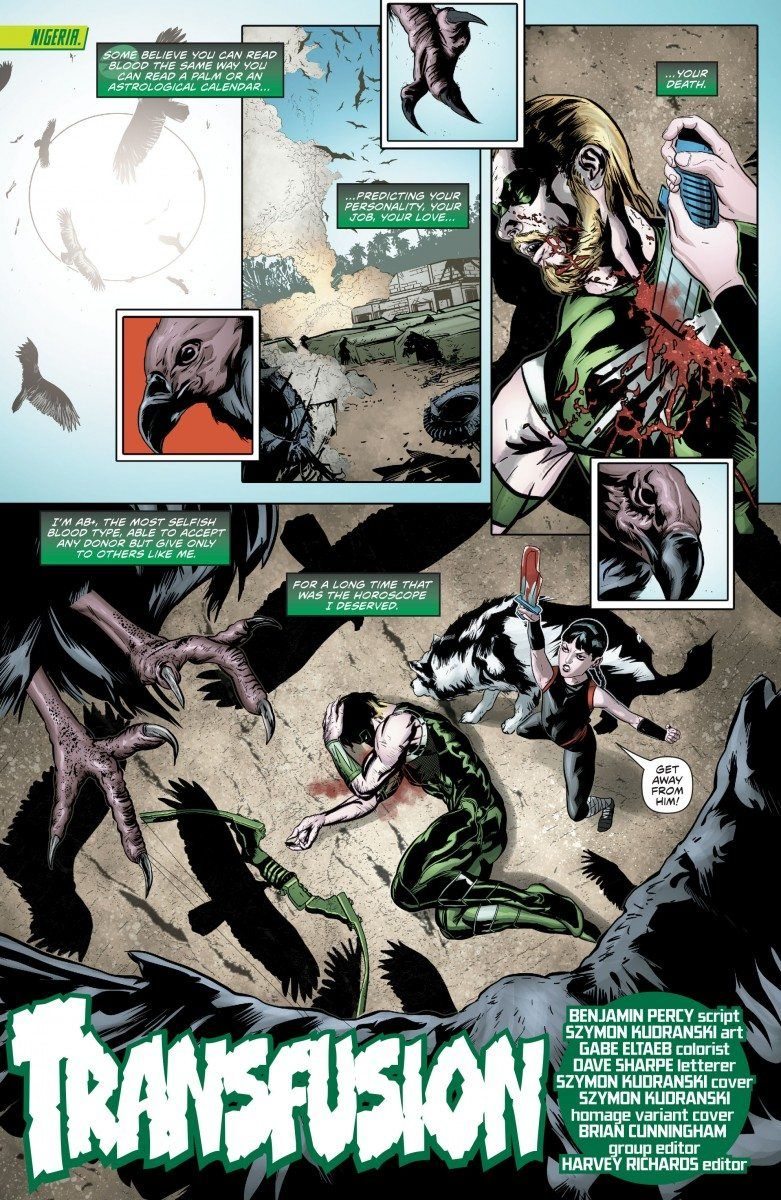 The rest of Green Arrow’s victories are lazy as well. To get Miracle back, all Team Arrow does is walk into Blood Bag’s mansion and take him back with very little resistance. Later, with Miracle in tow, Oliver shows up to a brawl between the Patriots and the Berserkers and just announces that there is a cure to be voluntarily administered to all those with the Lukos virus.

GREEN ARROW #52 does shine in other areas. The characters in the issue stay true to form throughout. The Berserkers continue to be as vicious as the day we met them and continue their desire to survive. The Patriots show more of their holier-than-thou hate against the Wargs. There is even a piece of great writing by Benjamin Percy, with a nod to Trump, when one Patriot proclaims that the Wargs belong behind a wall. Also, Deathstroke is fantastically written as the muscle for hire he has always been. Once he delivers Miracle to Blood Bag, Ollie shows up and confronts Deathstroke. Deathstroke has no real loyalty to Blood Bag and lets the Green Arrow do what he wants, even suggesting that he kill Blood Bag. Now that’s a real mercenary! 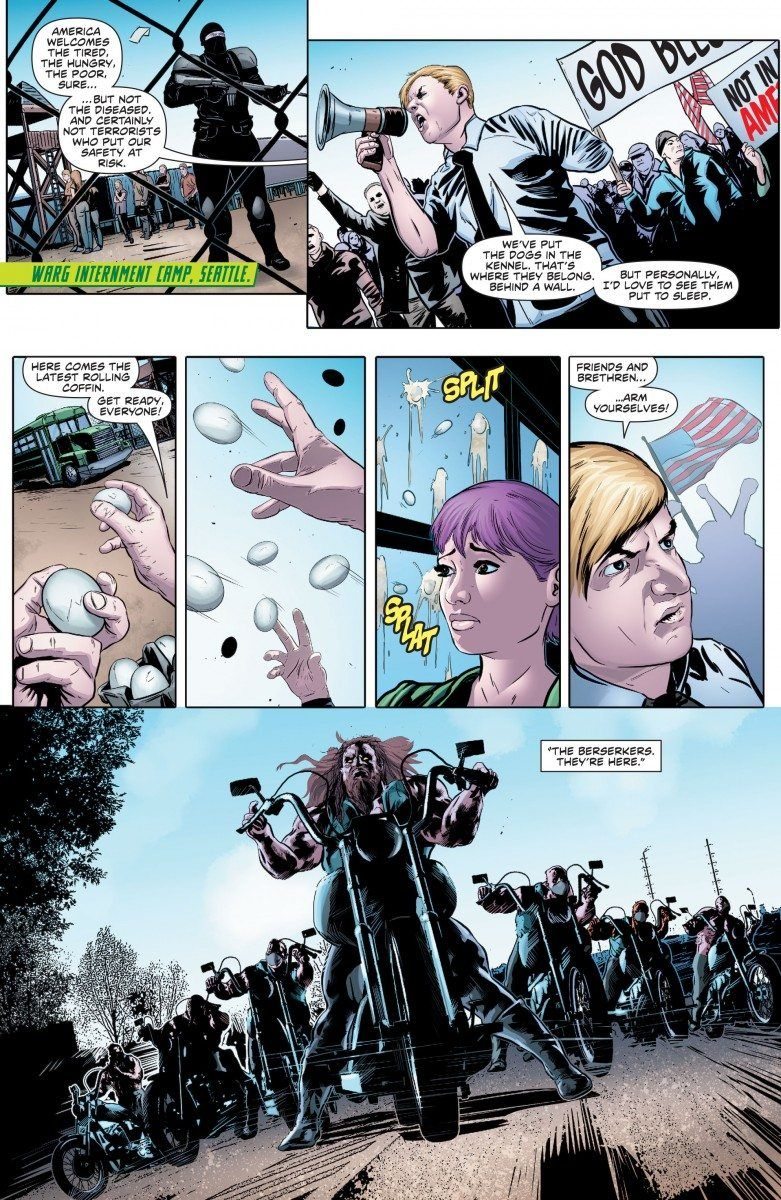 The art in this issue by Szymon Kudranski is riveting. It is hard to not spend time looking over the panels with Blood Bag or the Wargs/Berserkers. These characters are drawn and colored so creepily and horrifically (in a very good way) that they shine as the highlight of GREEN ARROW #52. The action between the Berserkers and the Patriots is wonderfully done, too. The fighting and tactics by both groups are savage, as we see claws and weapons flying everywhere. 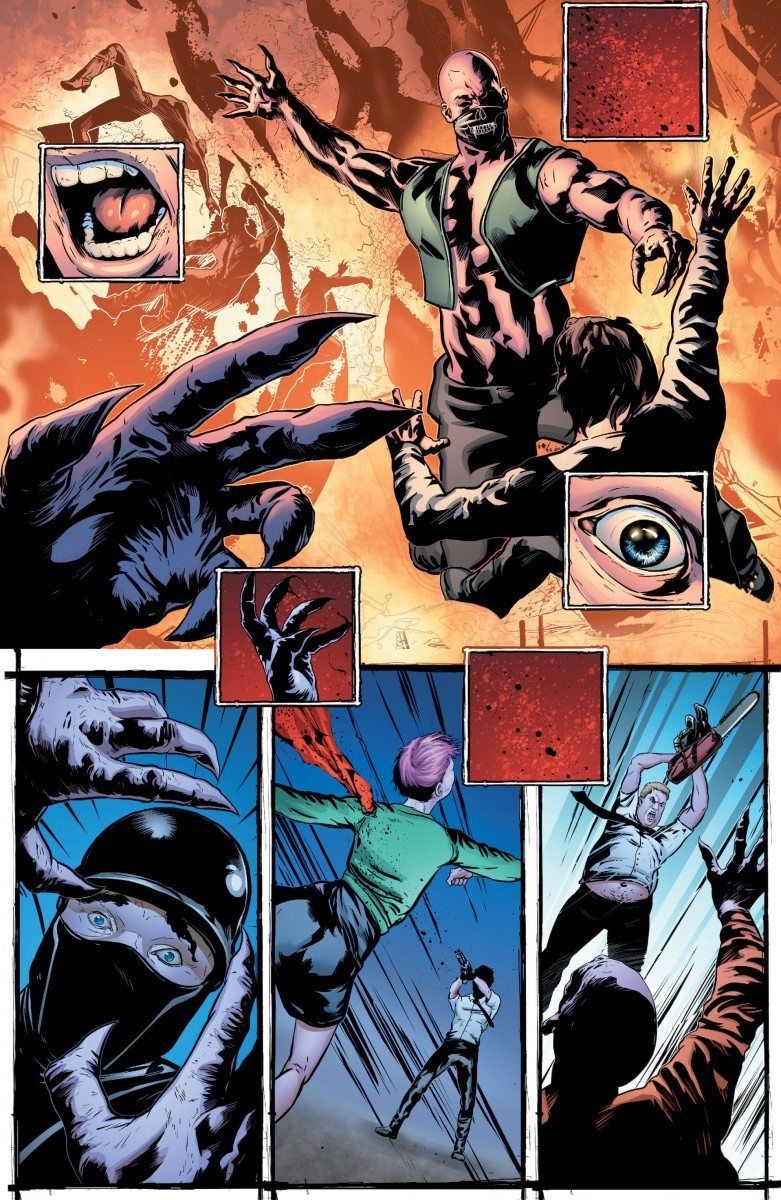 GREEN ARROW #52 attempts to jam a lot of endings into one issue. Having Oliver be resurrected, save Doctor Miracle, and then cure the city of the Lukos virus requires and deserves more than a single issue. Though there is a rushed story, the characters and the artwork are very well done, and those are probably enough to make this issue worthwhile.