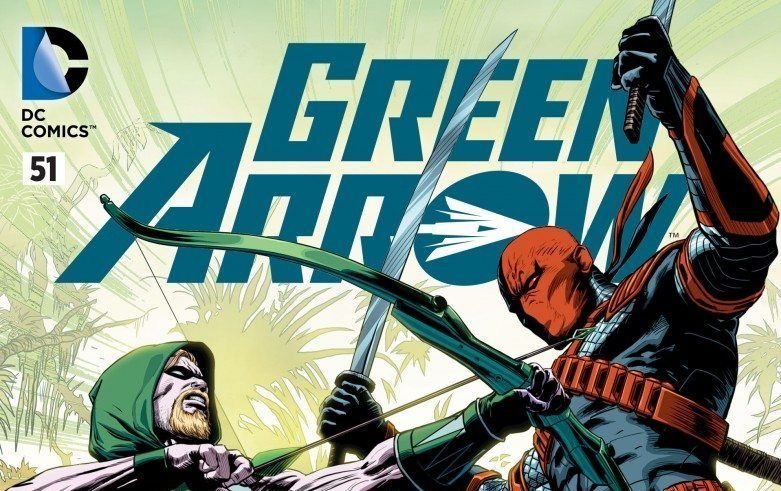 It’s time for Oliver Queen’s vacation with his sister Emiko and his dog George in Africa!

We left GREEN ARROW #50 with the Arrow team flying to Africa and getting surrounded by armed locals. They needed to find Doctor Miracle, a man with blood that heals all, who was last seen wandering around the continent healing the sick. Green Arrow is still a Warg (infected by a werewolf disease, Lukos Virus) and needs to find Miracle to cure him of his ailment. However, Mr. Queen is not the only one after Miracle. Jeffery Paragon, an extremely rich elderly man, is bedridden and hooked up to multiple blood bags, so he hires the mercenary Slade Wilson, aka Deathstroke, to get Miracle and save his life. 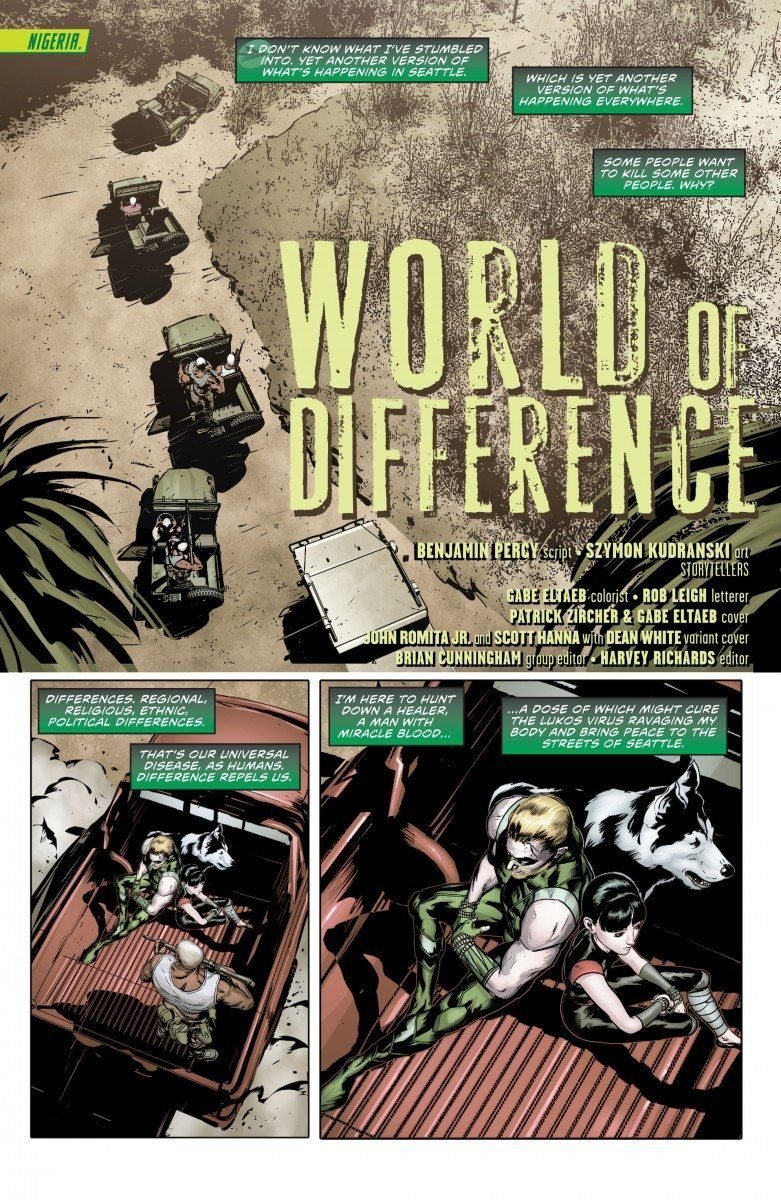 I like how this issue starts almost immediately after the last issue ends, instead of scenes back in Seattle. We see the the Arrow team tied up and captured by a group that is revealed as The Whites. The small army is led by a villain named Oga who wants to sell Oliver, Emiko, and George for a profit. They aren’t his only prisoners, since he is in possession of the highly desired Dr. Miracle. Green Arrow must find a way to get free and rescue Miracle in to cure the Lukos Virus. Meanwhile, Deathstroke is a looming threat, who is also on the hunt for Dr. Miracle!

READ: Love the Green Arrow? Learn more on his must read comics!

It’s great to see Benjamin Percy stick only with the storyline of the title character in GREEN ARROW #51. The previous issue followed several other characters in an ongoing war in Seattle, which felt like the Green arrow wasn’t getting the attention he deserves. When Oliver meets Miracle, he surprisingly ends up being brought to Oliver instead of Oliver having to seek him out. After the Arrow team is captured, one of The Whites is injured and Miracle is brought in to heal her. Oga slices his tongue and then Miracle kisses her (the blood needs to be transfused) in front of Oliver. We only leave team Arrow for a short time in the issue when Deathstroke comes for Miracle. The awesome chaos that ensues from Slade’s arrival gives our heroes a way out of their imprisonment. 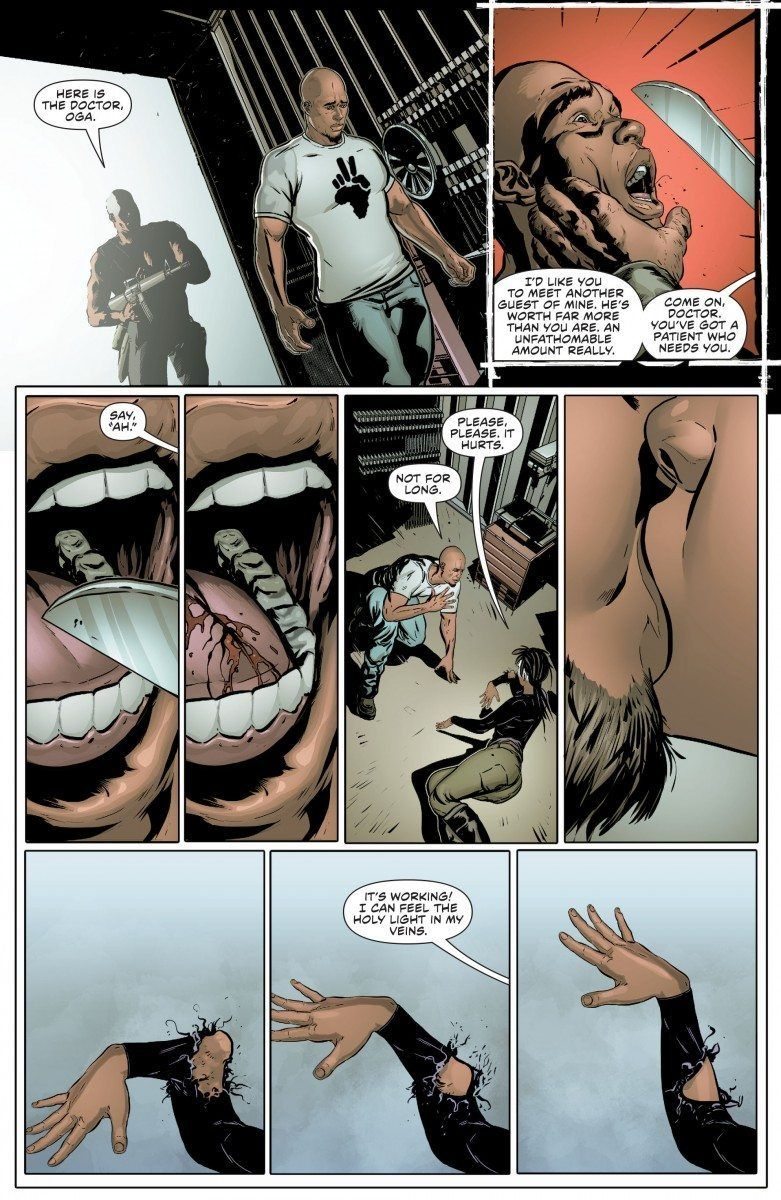 The character that highlights the issue is Oga. I found his character ideology fascinating. He mentions that he received an education from esteemed European and American institutions where he learned about the way in which white people have treated others and colonized his home of Africa. Oga despises this history and the events against his home, so he uses the same tactics with the justification that they should too if it works. Thus, he names his army The Whites, with white paint on their faces and describes them as “the rapists, the pillagers, the blood-starved neo-colonists”. 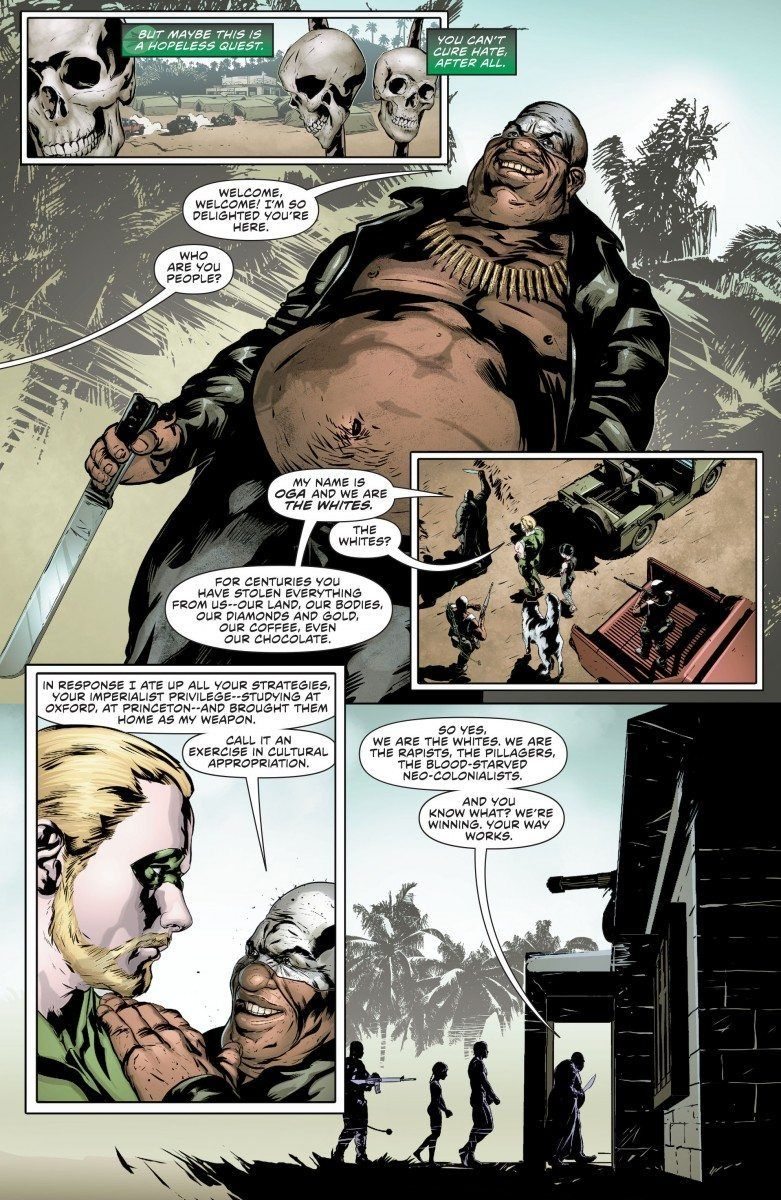 Szymon Kudranski’s art is a very welcome change for the GREEN ARROW series. Normally, we get dark tones and color, while in a dreary setting of Seattle. It’s understandable since Seattle is a cloudy and rainy place. In this issue, everything is positively bright and Oliver is extra pale because of it, which is a nice detail in the art. My favorite part of Kudanski’s work the issue, is when the art really shows off the fighting and killing skills of Deathstroke. He goes on a rampage against The Whites and raises his number of kills by stabbing, shooting, and blowing up everyone in his path.

LISTEN: Origin stories are great! Hear our podcast on them, including the origin story of Green Arrow!

Overall, the issue has done a great job for the Green Arrow. The plot of Oliver dealing with the Lukos Virus is a bit long and tedious, but his mission in this issue to cure himself and the other infected Wargs is exhilarating. The issue leaves us wanting more. Will Doctor Miracle be the answer to the virus in Seattle? Will Green Arrow be saved? We’ll have to wait for GREEN ARROW #52 to find out!