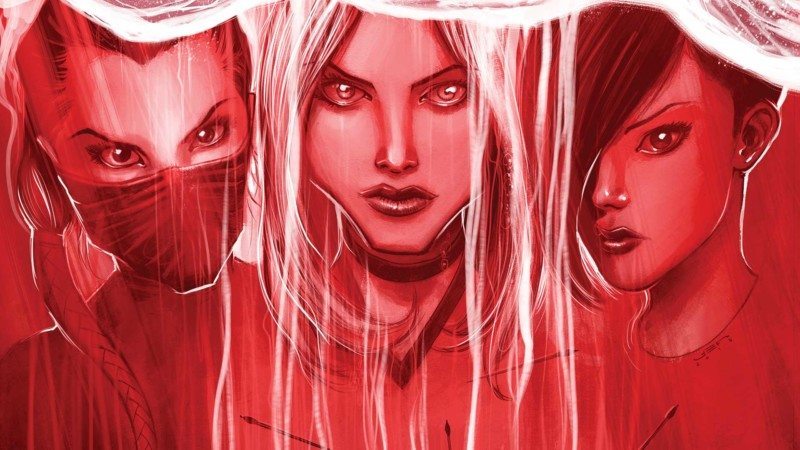 Everything and everyone falls to shambles in GREEN ARROW #2. Fresh off of Emi and Shado’s attack in issue #1, Oliver Queen’s lifeless body is taken to sea for disposal. After he is dumped off the side of a boat planted with narcotics in a plot to discredit him, a distraught Black Canary embarks in vain on a quest for truth and vengeance. Unbeknownst to her, Oliver’s body is discovered on the coast by Henry Fyff, who resurrects him with the aid of his Nainai. The Green Arrow lives on, but leaves his secret identity Oliver Queen dead and buried. Like I said, Oliver’s life has fallen apart and so has the plot. After what I personally thought was a solid first issue, this issue succeeds in furthering the story for future issues but fails to do so in a well-written and well-organized manner.

Green Arrow’s resurrection is poorly handled. In what feels like a rushed few seconds, Oliver is brought back to life by way of…acupuncture and broth? I was rather disappointed with this resurrection, as it felt forced and unlikely. It reminded me of season 3 of ARROW when Oliver is stabbed in the chest and thrown off a cliff, only to be saved and brought back instantly. Death should not be cheated in comics because if it is, the writer has robbed the story of stakes and the reader of their emotional commitment to the hero’s success. Cheating death has been a major issue ever since DEATH OF SUPERMAN (1992). I always find myself more attached to characters when there is the looming threat of losing them in battle. That is why shows like GAME OF THRONES and WALKING DEAD work so well; we constantly have to worry about our favorite characters biting the dust. 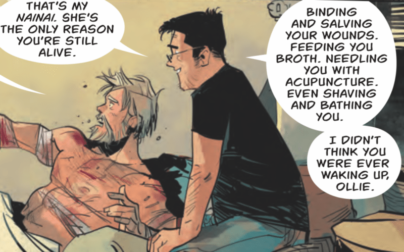 This fractured narrative forces the reader to cut from scene to scene, disrupting the flow of the story. We jump back and forth between Oliver healing, Black Canary investigating, an odd appearance of Diggle, and the death of Oliver Queen in the final panel. It feels very choppy and it lacks fluidity. I rather enjoyed the conclusion of this issue, where Oliver Queen is ‘dead’ and Green Arrow is all that remains; however, the method of reaching that conclusion is what turned me off.

READ: Find out more about the Rebirth comics here!

The art in this run continues to be superb as Otto Schmidt manages to maintain the eerie and creepy tone from the first issue. His transitions and layouts continually amaze. In one particularly impressive case, Schmidt illustrates Henry’s panic as the character drops his chips, which rain down into the panels below. Schmidt creates so many wonderful, dark environments and characters with incredibly intricate designs. Schmidt’s art makes the story feel tangible and enraptures the reader. 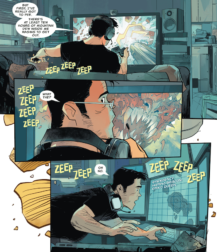 Aside from the fantastic art in this rebirth run, its largest strength lays in the chemistry between Dinah and Oliver, so let’s hope they get more scenes together in future issues. Other than that, GREEN ARROW Rebirth needs better pacing and further character development. Oliver’s split personality has been interesting, but we don’t need every character to come across that way. There is a ton of potential in this story and the villains seem menacing enough to create a compelling threat, so I hope it all pays off.