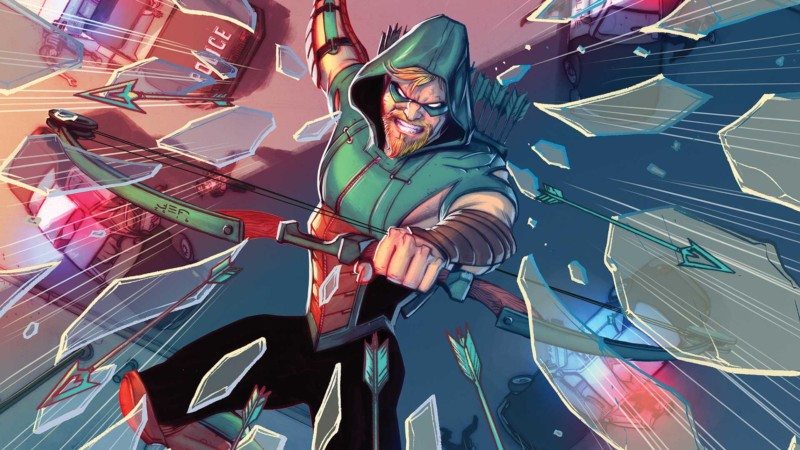 Benjamin Percy began his “Emerald Outlaw” story arc with much intrigue and mystery. The shocking murder of half a dozen Seattleites with Oliver Queen’s own arrows set the city up against him. A corrupt mayoral candidate, a murderous tycoon at the head of Queen Industries, and an impostor Green Arrow all appeared to be in league with each other. The last issue ended with the murder of a beloved Seattle football player in his own stadium, and Ollie seemingly caught red-handed. This set-up promised an all-out manhunt for Green Arrow, with exciting storytelling possibilities. The returns come up short in GREEN ARROW #14, with an action-packed issue that moves the plot along reasonably well, but at the expense of the rich characterization that has defined Percy’s run of the new series. 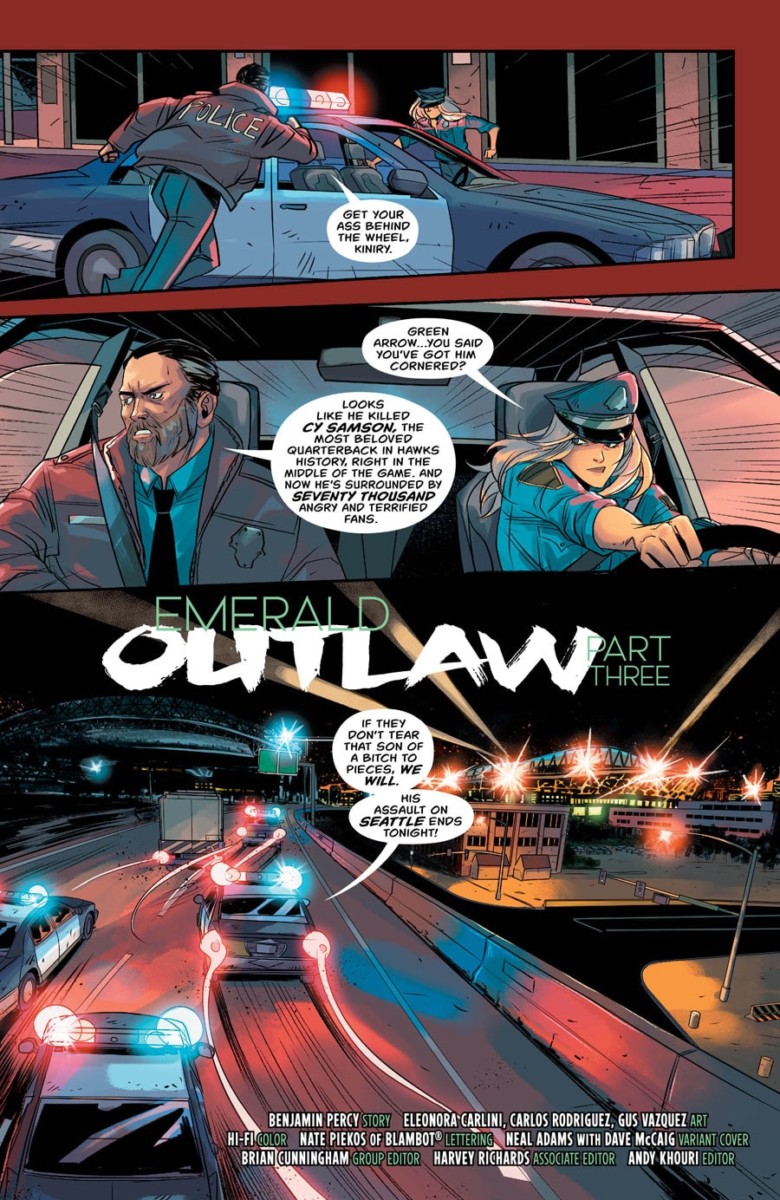 The entire issue deals with the aftermath of the football star’s murder. Ollie chases after his mysterious impostor, while the police chase after him, along with Black Canary disguised as a cop. Eventually, Ollie catches up to the archer, who reveals himself to be a member of the League of Assassins known as Malcolm Merlyn, AKA the Dark Archer. The crux of the story is built upon this revelation, but the impact is less than resounding. Readers who joined in with Rebirth will have no idea who this character is, and for those who know the Dark Archer is Ollie’s arch rival, the twist will be seen a mile away. It’s important for a plot twist to be able to resonate with all readers, particularly in a series that predicates itself as a relaunch accessible to new and old readers alike. This “twist” fails to hit the mark.

READ: Get up to speed on the hunt for the Dark Archer with our review of the previous issue, GREEN ARROW #13!

It’s not that this story is in any way bad. It’s just that there were so many moving pieces to the “Emerald Outlaw” storyline, and this issue narrows it all down into one event at the football stadium. A single location would be fine with the proper intensity, and there was an opportunity here to feature an intense chase, with Green Arrow on the run from the very people he’s sworn his life to defend. The angered citizens and police of Seattle are quickly dismissed in favor of a focus on the Dark Archer, who we don’t care about yet. Presumably, the intriguing plot threads that were done away with here will be picked back up next issue, but in the meantime, GREEN ARROW #14 presents a jarring tonal shift. We thought we were reading a story about Ollie defending his name, but now that element is being downplayed. The revelation of the Dark Archer takes the story in a different direction, and it remains to be seen whether that direction will be worthwhile. 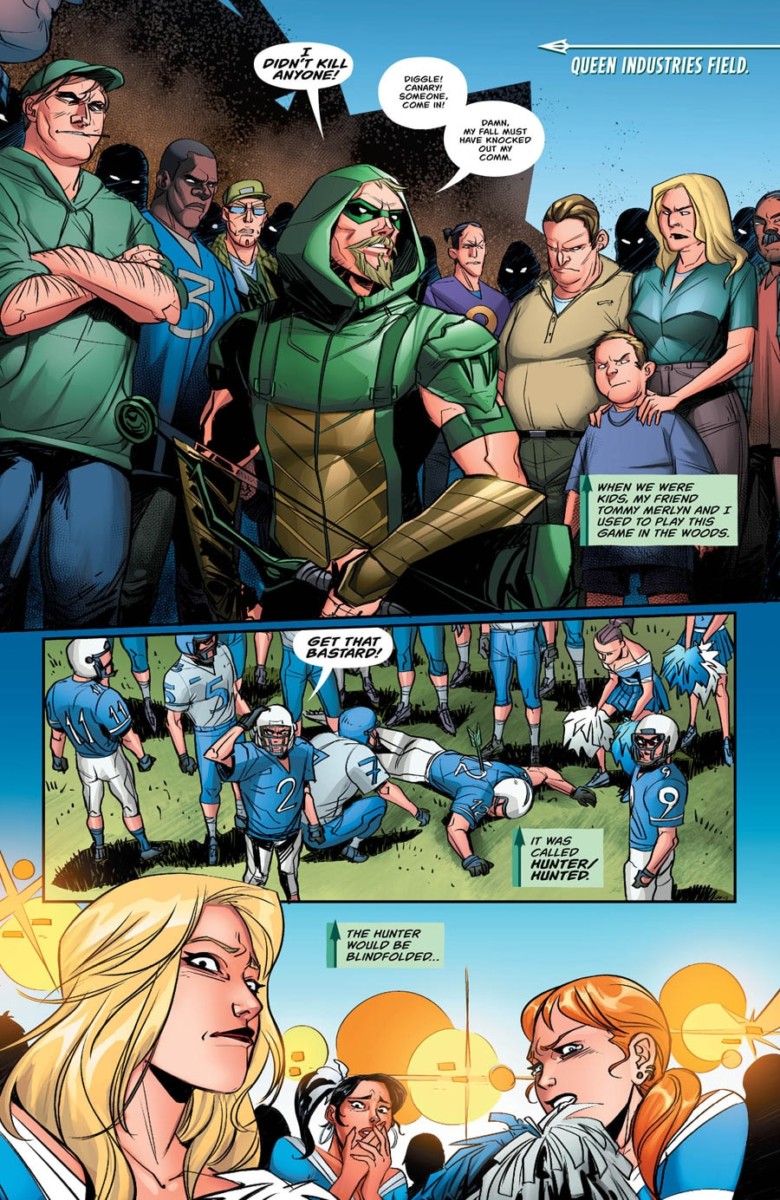 Similarly, because this issue is centered around one location, there really isn’t any room for interesting character moments. The usually charming and sardonic Ollie is too busy chasing after the Dark Archer to make his usual quips, and Black Canary is too busy pretending to be a cop to be Ollie’s usual romantic foil. The only interesting interactions here come from a provocative speech by the Dark Archer, who makes the claim that he and Ollie are one and the same, but for a single key difference. Malcolm was buried by the League of Assassins and reborn as a new man. Oliver was metaphorically buried too, but never reborn. Instead, he remains clinging to the life he once had, stuck in the past. It’s an intriguing notion, hopefully, to be explored in later issues. There’s a definite opportunity to cast Malcolm as Ollie’s dark reflection. For now, though, that’s an idea floating in the air without any real resonance.

READ: GREEN ARROW #10 took off with the speed of a runaway train – read our review here!

Another surprising shift comes in the art department. The beautiful artwork by Otto Schmidt has been replaced by mediocre artwork from no less than three different pencilers: Eleonora Carlini, Carlos Rodriguez, and Gus Vasquez. Rather than blending their styles together to create some genuinely stand out work, these artists have instead streamlined their work into something rather mundane. Action-packed panels are flat and fail to catch the eye. As the issue is set entirely in a football stadium, there’s a lack of variety in the imagery that grows wearisome. There’s an interesting design done for the Dark Archer, who looks like an amalgamation of Green Arrow, Ra’s Al Ghul, and Wolverine. Hi-Fi’s color work on Malcolm is also eye-catching, with a deliberate decision to always cast him in the shadow against Green Arrow’s appearance in the light. Yet there isn’t enough here to make the issue’s art stand out, which is glaringly obvious when compared to the always distinctive and expressive work by Schmidt. The three artists here would have been right at home in a series like ACTION COMICS, but they simply don’t fit with the vibe of GREEN ARROW.

With an unexpected dive in both writing and art, GREEN ARROW #14 proves to be a disappointing entry in the “Emerald Outlaw” arc. It’s a perfectly serviceable story in its own right, but it doesn’t feel like it belongs in the world created by Percy and Schmidt. Their stories are usually rich and complex, and this one is simple and straightforward. I have every expectation that the series will pick back up in the next couple of issues. For now, this series has hit a relatively low point that doesn’t do quite enough to generate excitement for future issues.