GREEN ARROW #13 is part two of the appropriately titled “Outlaw” storyline. Now back home in Seattle, Green Arrow and Black Canary continue their heroic efforts around the city. With his alter ego of Oliver Queen presumed dead and gone, the Green Arrow mantle is all that’s left to help save his corrupt home. While government officials oppose his vigilante efforts, Green Arrow feeds off of the citizens’ continued support. That is, until he is framed for a psychotic murder rampage and everyone changes their Arrow opinions. It seems that nothing can go right, no matter which mask Oliver Queen puts on.

There are many questions yet to be answered. Who is the mystery archer hired to pose as Green Arrow? How can Oliver get his company and life back if everyone thinks he is dead? How will Green Arrow clear his name now that he has no friends in his city? We are 13 issues into this new Rebirth story and while villains have come and gone, the main issue surrounding Oliver Queen remains strong. 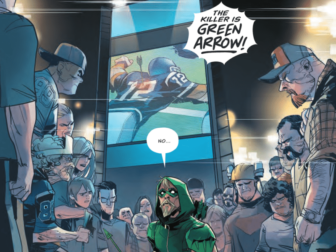 READ: Catch up with our GREEN ARROW #10 Review!

I’ve enjoyed reading and reviewing GREEN ARROW during this Rebirth run. Writer Benjamin Percy has been here every step of the way to write his version of the hooded hero. Percy engages readers in an exciting story surrounding a presumed-dead Oliver Queen struggling to regain his life. By constantly throwing obstacles in front of Green Arrow as he makes his way home, the story has managed to last 13 issues thus far. Percy has also managed to maintain the self-discovery theme during this entire run. This is done through the thought-provoking dialogue between Oliver and Dinah on the first few pages of this issue.

The story started with the Ninth Circle and Oliver’s family struggles with his sister Emi and her mother Shado. Then we witnessed his growing romance with Black Canary on the island. Now we are finally back home in Seattle, and while Oliver should be able to easily fix things on his own turf, he’s taken one step forward and two steps back. All the credit for keeping readers entertained throughout goes to Benjamin Percy. Each subsection of the story flows into the next, with never a dull/down moment. Even with a few B+ issues, the overall run has been very solid.

READ: Are you watching ARROW on The CW? Check out our review of the 100th episode!

Percy is not alone on this journey. He gets help from a handful of fantastic artists. One of these artists is Otto Schmidt, who took the helm on the two-part “Outlaw” storyline. GREEN ARROW’s run thus far has mainly utilized a dark color scheme, occasionally incorporating brighter colors during romantic scenes. The last two issues, however, have brightened things up quite a bit now that Oliver has made it home. That being said, there are some bleaker looking panels mixed in to make sure readers know that there is still work to be done before the happy ending. The biggest strength in this week’s art, however, is the detailed facial expressions of our characters. Schmidt does a great job showing different emotions on characters, expressing pain and surprise through extreme close-ups. This managed to grab my attention enough for me to comment on it aloud to my friends after reading it. 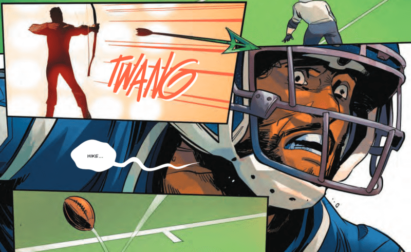 Overall, the GREEN ARROW run has been one of my favorites in the DC Rebirth line. Percy is a consistently great writer and all of the artists involved have done well to maintain the tone of each individual story. I have loved the sub-genres within the superhero comic as well (there have been heist, rom-com, mystery, and spy thriller issues). As long as we readers are kept on our toes with different ways to tell Oliver Queen’s story, we will continue to enjoy GREEN ARROW. I look forward to finding out how Green Arrow will clear his name of all crimes. I only wonder how Oliver Queen will be resurrected in the issues to come.