Action. Mystery. Espionage. These are all of the things that make GREEN ARROW #10 the best issue in the Rebirth run thus far. The story follows our three heroes (Green Arrow, Black Canary and Diggle) as they hop aboard the Empire Express from Shanghai to Seattle. As the team attempts to stay hidden from the wealthy diplomats on the train, trouble ensues in the form of a mystery murderer (read the issue to find out who). With their cover blown, this issue sets up a thrilling sequel to MURDER ON THE EMPIRE EXPRESS. And yes, this title is taken from the Agatha Christie classic, MURDER ON THE ORIENT EXPRESS.

READ: Like The CW’s Arrow? Check out how to make Season 5 great!

Benjamin Percy does a fantastic job taking a premise we have all seen before, a murder mystery on a inescapable transport, and giving it new life. The dialogue in this issue felt situationally real during our heroes’ times of panic. It’s the simplest lines of dialogue, not the long exposition in conversations between characters, that keep readers invested in the scene. While the story in this issue is relatively basic, it demands to be read by advancing the plot and maintaining the element of surprise.

Side Note: Percy even finds time to throw in the classic Green Arrow boxing glove arrow!

Juan Ferreyra makes his artistic return to the run after a four issue hiatus (see GREEN ARROW #5). Every artist on GREEN ARROW REBIRTH has been fantastic, and this issue is no different. Ferreyra utilizes every shade of blue to add a feeling of mystery to this spy thriller. This blue is interrupted only briefly, in moments of intense action, by a deep red color palette to emphasize pain. The issue’s cover (see featured image) looks like it is straight out of the Goodboy Griffin Art Gallery, which is always a win in my book! If you want to compare two character’s Rebirth art, I recommend Arrow and Flash. The darker, grittier Arrow is so tonally different then Flash’s brighter design, yet both are brilliant in their own right. 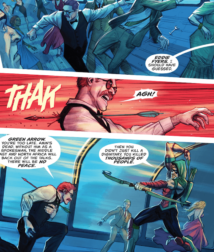 READ: How’s Percy’s run so far? Check out our review of GREEN ARROW #9

Overall, the GREEN ARROW run has been one of my favorites in the DC REBIRTH. Percy has been consistently great as a writer and all of the artists involved have done well to maintain the tone of each individual story. Next issue will likely wrap up the Arrow team’s espionage adventure on the Trans-Pacific railway. As long as the grounded and gritty street level hero can continue to deliver good comics, we will continue to enjoy them!