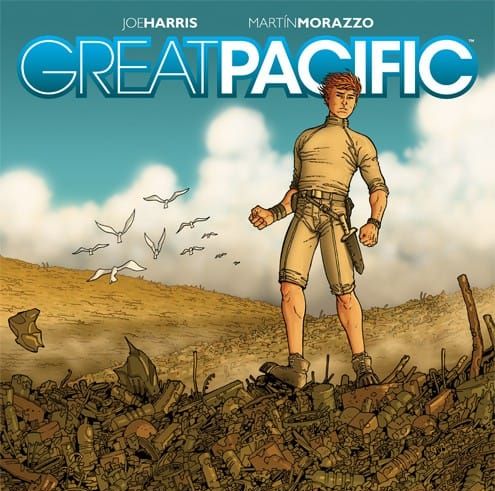 Climate change and the future of the environment have taken on a greatly increased importance in the 21st century. After releasing more waste in the past century than all of the others combined, much of humanity has finally realized there is a future price to pay for the sins of the past. Twenty-first-century fiction has capitalized on that mindset, with incessant tales of ruinous post-apocalyptic societies and greedy, maniacal fossil fuel corporations.

Into this context comes the Image series GREAT PACIFIC (2012–2014) from writer Joe Harris (THE X-FILES SEASON TEN) and artist Martin Mazzaro (ABSOLUTE MAGNITUDE). Great Pacific follows third-generation Texas Oil heir Chaz Worthington III and his plan to turn the notorious Great Pacific Garbage Patch into the world’s newest country, New Texas. This is a fascinating hook for a story, ripe for exploration into ideas of environmental concerns and wish fulfillment as well as the geopolitical aspects of nation building. Unfortunately, after the first arc, “TRASHED,” large time jumps and lax character development hold the series back from its potential, and it winds up using these ideas as mere window dressing.

During the first arc, through a series of corporate backroom maneuverings and new experimental technology, Chaz embezzles billions of dollars to plow into his plan for the Great Pacific Garbage Patch, all with the help of his best friend and personal assistant, Alex. 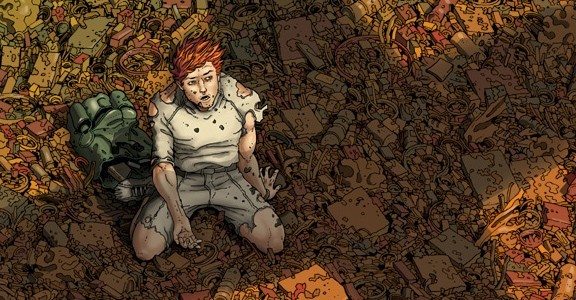 Chaz does not possess the stereotypical qualities of the rich, spoiled oil heir, nor does he have a guilty bleeding heart seeking to atone for his family’s actions. He is idealistic about the future of New Texas, yet driven by selfish and economic goals; He’s not afraid to get his hands dirty when coming into contact with the indigenous people living on the patch.

Throughout the series, though, there is not enough development or insight into his motivations. As much as Chaz is supposed to be a trickster Ferris Bueller–type, his actions make him seem somewhat schizophrenic. Quick, interspersed flashbacks with his father and grandfather feed our curiosity but fail to open up the window of his psyche and thus do not allow the reader to truly empathize with him.

After the first arc, in which Alex has secured financial security for his fledgling nation and successfully defended its borders from the U.S. Navy, the series slumps seven months into the future where New Texas is a thriving settlement. Although this does a bit of a disservice to the story, seeing Chaz boldly run his new country and make alliances with other politically unstable nations makes for quite a bit of fun and drama. However, it never really gives the reader the broad strokes of the transformation of the garbage patch into a new country, leading to an overall sense of disorientation about the nature of the world and New Texas’s place in it.

WATCH: Want to see Joe Harris talk to Comicsverse about his work? Check out our interview at Special Edition 2014.

The third arc does away with most of the plot momentum entirely, introducing a new villain, billionaire Kraven the Hunter–type Baston Duvalier who proceeds to destroy Chaz’s government along with most of the settlement of New Texas. The storyline ends with characters’ arcs tied in a neat bow, a decision that makes the whole series read like an abridged version of a better book. 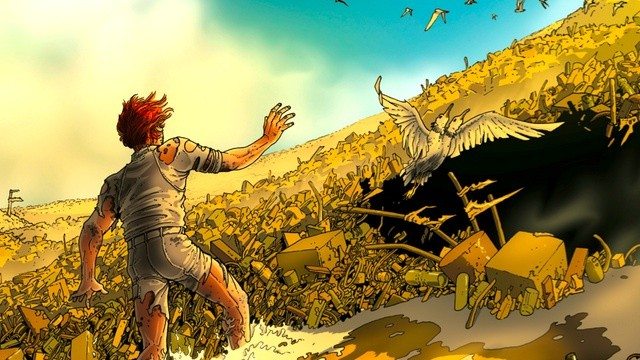 It’s possible Harris and Mazzarro may have known about the book’s upcoming cancellation and made a conscious decision to expedite the plot, but the book suffers for it. Frankly, too many world-shattering events occur in every issue, denying the reader the ability to see both the characters and the story’s world at a closer angle.

Although GREAT PACIFIC does not reach its true potential, it remains a conceptually appealing book. Harris, a screenwriter, gives the story a movie industry–like crisp log-line that remains compelling. Their newest collaboration together, SNOWFALL from Image this February, remains extremely intriguing if it can deliver the story it seeks to tell.

READ: Curious about SNOWFALL? Check out our preview here!