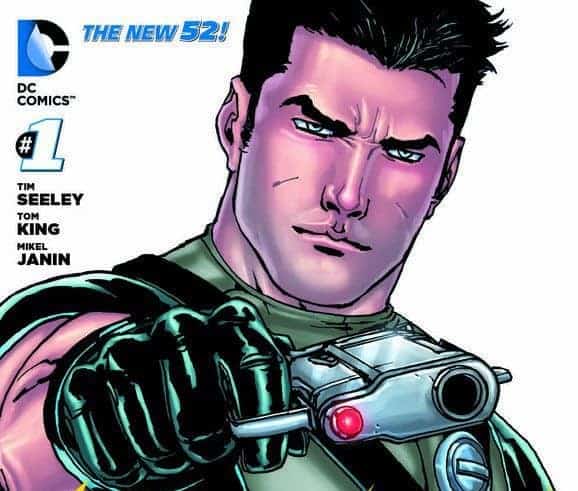 What does a former superhero that is undercover trying to discover the secrets to a spy organization do in his spare time? Have fun with hot college girls!

This issue has Dick Grayson on another mission assigned by Spyral. The details of the mission are of little importance, since Helena and Dick complete in one page. The real story in this issue is Dick uncovering more about the organization Spyral. After cleverly irritating Helena by sucking loudly on a lollipop- enough to make her hit it out of his mouth- Dick was able to send it to Batman for analysis. This all occurs while he is at a finishing school in England, where Helena Bertinelli is the matron.

Who are all these characters?  Find out in our blogs!

Batman finds traces of microscopic robots which are designed to rid the body of anything that falls off it. This means Minos (head of Spyral) has gone to extreme lengths to keep his identity a secret. It also means that Dick has these robots on him as well, which could eat away at him at any moment! Batman is called off to handle another problem, and Dick hears a group of college girls whispering outside his room. This aspect of the issue was amusing and just plain fun.

For more comic book fun, check out our podcasts!

There is another story element which features Mr. Nighter threatening the life of a man by holding him off the top of a building. He is looking for information on what occurred in Al Khatim. When he finds out that the man doesn’t know anything, Nighter kills him. This part of the story felt out of place with the entirety of the issue. I understand that it was probably to segue into more stories in the future, but it didn’t blend well.

Meanwhile, Dick is having a grand ol’ time getting chased by college girls. In this scene, the artist did an exceptional job conveying the joy Dick has with performing acrobatics, and it made me miss the days when he was flipping through the air as Nightwing. Elsewhere, Helena finds out that someone (Dick) has been using Spyral tech to communicate with an outside force. Dick and the college girls eventually get caught, and Spyral “punishes” Dick by making him the new acrobatics instructor to St. Hadrian’s Finishing School. The issue ends with Helena stating that she understands why Dick joined Spyral- to be a hero. But he still misses being Nightwing (I miss him as Nightwing too), so Helena offers herself to be chased by Dick as a peace offering.

Hear more about Grayson, Batman, and the DC Universe from some of the creators in our interviews!

Positives:
– An entertaining issue with some good character development on Dick and Helena’s part.
– Artwork colorful, bright, and vibrant. An excellent job with Dick’s facial expressions,, it really made the scenes come alive.
– Provided more clues to the mysterious Minos and the danger that Dick is in by being apart of Spyral

Negatives:
– What the story lacked in action, it made up for in character and story development
– The other story line came of out nowhere and felt awkward and out of place with the issue as a whole