The day has officially come! Dick Grayson has officially quit Spyral and returned home to Gotham! Will the Batman family accept him back after faking his death? Will Spyral accept his resignation? Let’s find out!

The name of the game is misdirection. The question is, can you keep up? Misdirection has been a common theme throughout Grayson and with it being an espionage book, this is expected. To my surprise and pleasure, Seeley and King used a different form of misdirection to support their narrative this month. With Grayson taking a leave from Spyral, this issue took the focus off of Dick’s spy antics and turned the spotlight on to his original skillset, performance art.

This issue starts out with Dick talking with Alfred about what separates performers from liars. Alfred points out the need for performance, to “bend the world in order to repair it, to make it easy for others to tread”. A polar opposite to the work Grayson has done for Spyral, an organization that feeds on the collection and abuse of secrets by any means of deception or manipulation possible. Seeing Dick put on make-up, a mask, to have his first meeting with an amnesia-ridden Bruce was the moment when I understood that Dick is at his most comfortable behind a mask and getting to perform with his family. It was one of the rare moments since the New 52 began that you can truly tell that Dick Grayson is one of the most genuine, loving characters in the DCU and it is definitely something I miss from the Nightwing days. 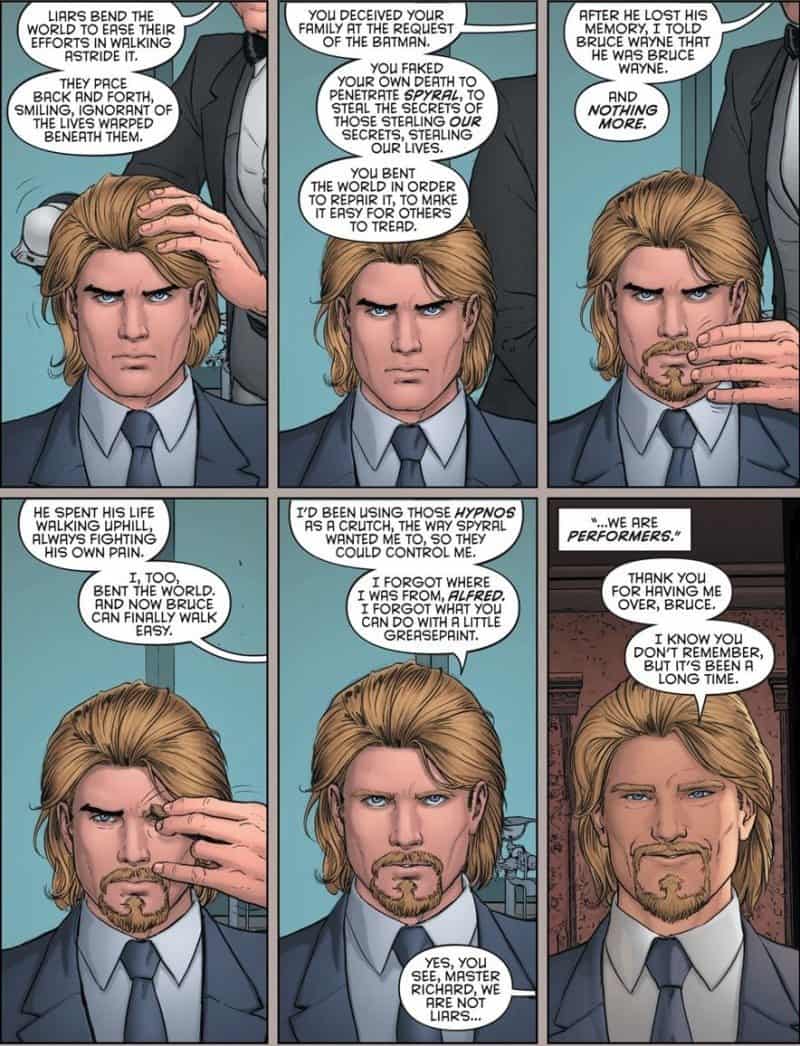 After the encounter with Bruce, an encounter with Agent Zero occurs in the mansion where he receives an ultimatum. Come back to Spyral or the world learns that Bruce Wayne is Batman! Unwilling to betray Bruce, Grayson gives in and is given 24 hours to let his loved ones know he lives. This is where you can truly tell that Seeley, King and Janín hit their stride as a creative team. Used first when Bruce was introduced in the beginning of the issue, Jason and Tim, Barbara, and Damian are introduced by being drawn onto a black page with quotations from interactions throughout the decades surrounding them. This allows each major character in Dick’s life to enter the stage in a spotlight of sorts without the need for introductions. The spotlight brings a focus to the characters on the page with the addition of quotes allowing the readers, new or old, to identify that these are major characters in Dick Grayson’s life. 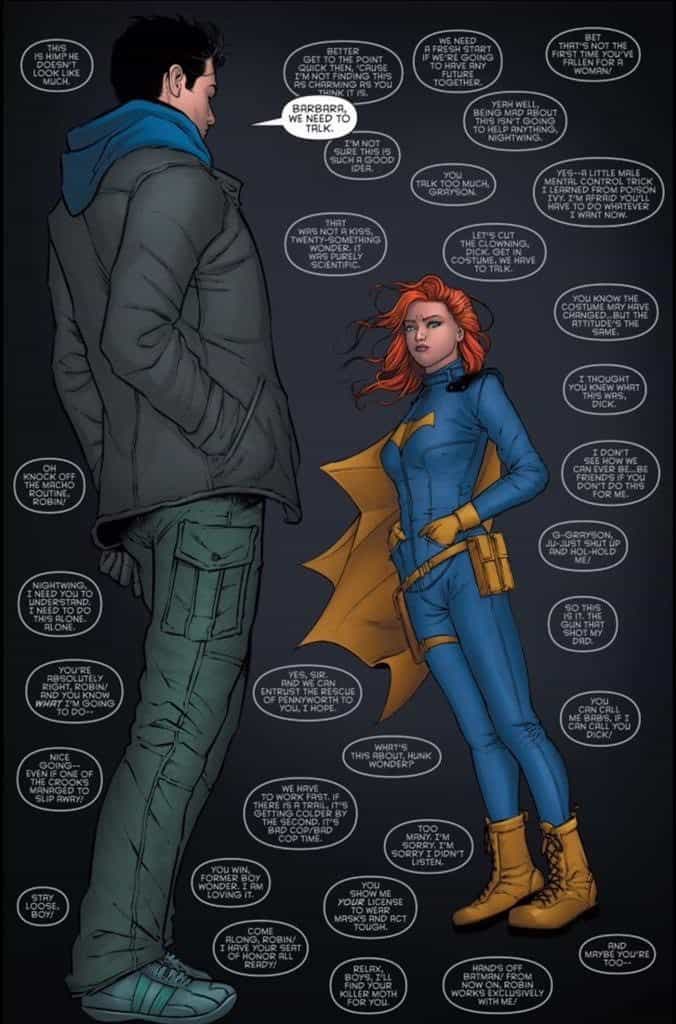 Another fascinating thing I really enjoyed about the issue was the recycling of the Cluemaster’s Code from the Future’s End issue of GRAYSON. It was not something I caught at first and I had to reread the interactions between each Robin and Batgirl to catch. Each interaction was a performance from Grayson, an act put on with genuine emotion so that Grayson could hack Spyral and deactivate the Hypnos. The great thing about this was that the characters knew Grayson was using the code before I did, the writers having done such a great job of writing an apologetic Dick that I couldn’t tell it was a performance. 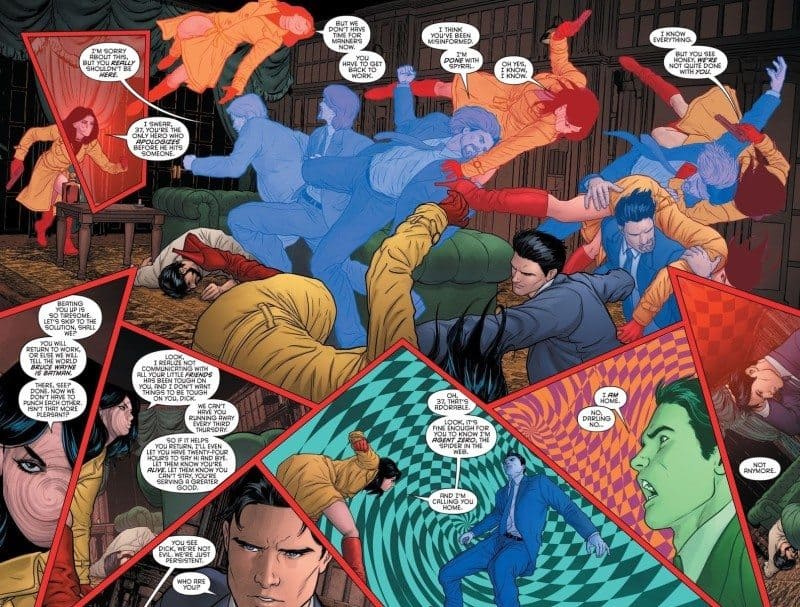 I could go on about how well this comic is written all day but once again, Grayson would be nothing without Janín’s art. His mastery of action panels never ceases to amaze; specifically, Grayson’s fight scene with Agent Zero and his leap of faith with Batgirl. In these two scenes, Janín controls the page with both detail and movement. Each interaction between characters is full of conversation but the action sequences never slow down the comic. His art allows panel movement to flow with ease and beauty in a way I’m not used to in comics. And did I mention he makes Jason Todd’s costume look cool? I don’t remember a time before Morrison’s BATMAN AND ROBIN that I looked at Red Hood and thought, “Hey, that guy looks pretty cool, I want to see more of this guy.”

I thought this issue was one of the best of the run so far. I think the art seems to get better by the month and the risks taken this month to explore the theme were innovations that I’d expect from a DC comic. Before I go, I want to highlight my favorite parts as well as what I thought needed work. I particularly loved the spotlight the issue gave to Dick’s relationship with both Bruce and Damian. Bruce was the only character to receive a spotlight not shared with Grayson I felt like this was a great artistic choice in showing how Dick truly looks up to Bruce whereas with the Robins and Batgirl, he shares the spotlight because he can relate to them on a more personal level. The reunion with Damian brought a tear to my eye, their dynamic is just so exciting to read and I hope to see more in the future. My one complaint this issue had to be with the way King wrote Barbara. I found her characterization to be very stiff and a stark contrast to how she acts within her own title. I will forgive it though, the rest of the issue was amazing and I already can’t wait for next month.

WATCH OUT FOR MORE FROM MATTHEW!