GRASS KINGS #2 is an emotional and impressionistic journey into the minds of the Grass Kingdom’s residents. Light on plot, this issue’s visual exploration of grief and well-designed layout more than makes up for a meandering story. Writer Matt Kindt and artist Tyler Jenkins’ masterful portrayal of subtle emotions have elevated this series to new heights. If you want a comic that is both violent and looks like Monet’s Water Lilies, pick up GRASS KINGS #2.

The main story centers on Robert, the leader of the Grass Kingdom. He takes in the mysterious lost girl who appeared in a lake. Simultaneously, there are piecemeal vignettes involving the other residents of the Grass Kingdom. These elements weave together in a way that provides a background into the town’s inner workings but does little to service the “missing person’s detective plot” from the first issue. In my review of issue #1, I feared that the generic lost girl plot would eclipse the exploration of the town, the series’ most interesting aspect. I was gladly proven wrong.

READ: Missed the first issue of GRASS KINGS? Here are our thoughts on it!

Kindt’s subtle portrayal of the townspeople is the real driving force of this issue. The dialogue is sparse and not overly expositive. We are slowly fed pieces of information from unreliable narrators that don’t drive the plot but drive our understanding of their personalities. In one scene, a local asks the sheriff (Robert’s brother) if he would like to lead the Grass Kingdom. The verbal loop-de-loops that follow in the sheriff downplaying his ambitions are a minefield of potential conflicts. The Biblical name drop of the sheriff being “his brother’s keeper” is a not-so-subtle bookend to this conversation and indication of what’s to come. 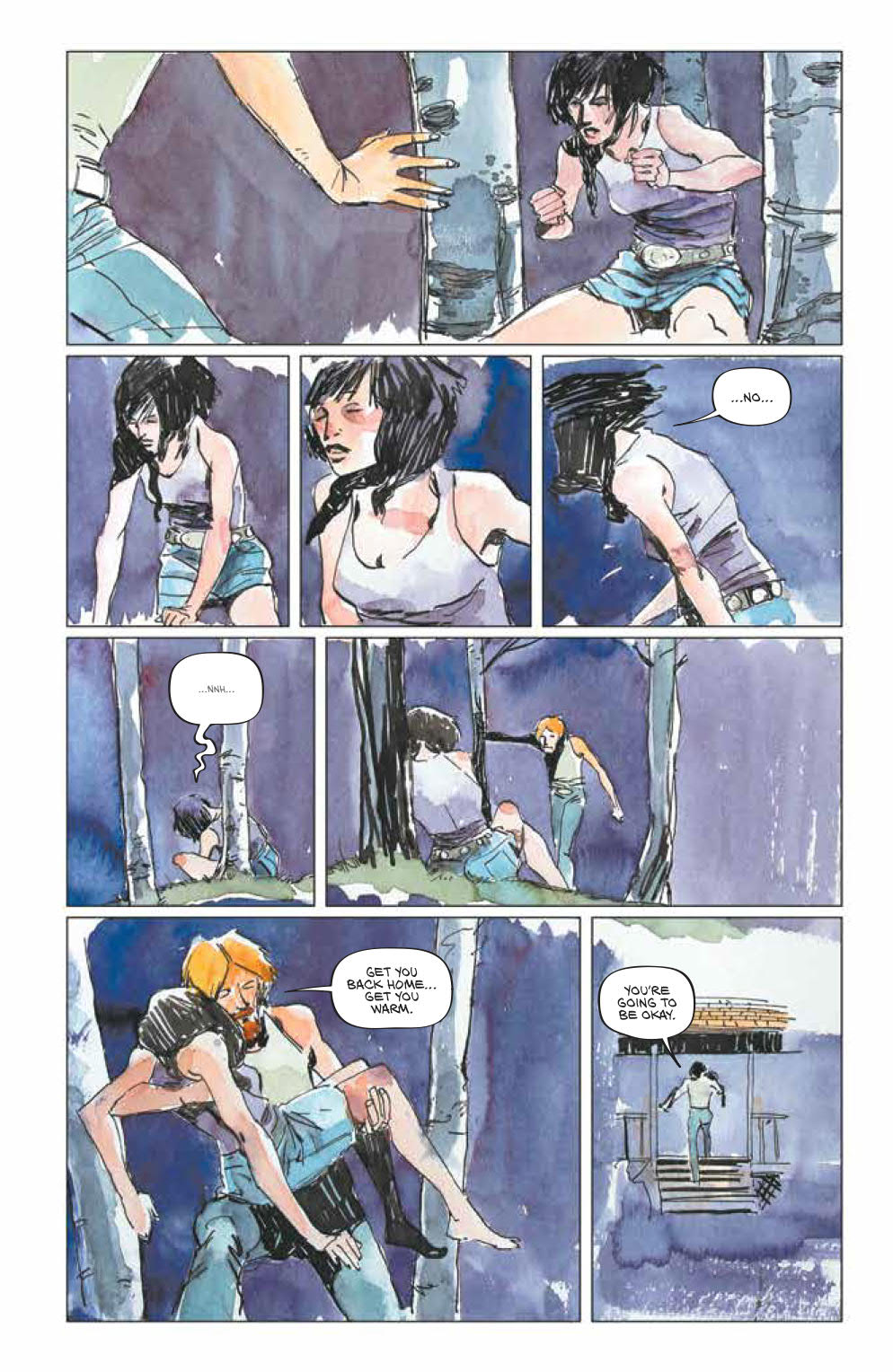 Like the previously mentioned scene, this entire issue is perfectly structured. For example, the issue begins with a 257-year flashback into the town’s violent past with the murder of a peaceful native. The same image is recreated in the present on the last page in a way that is neither cheesy nor overly dramatic. Kindt’s inclusion of these structural pillars bolsters and informs the events of the book. History repeats itself. The supposedly peaceful and isolationist members of the Grass Kingdom are not immune to this. The most intriguing mystery in the book is not “what’s going on with the missing girl?” but “who is the aggressor?” and “who is the victim?” in those beginning panels. 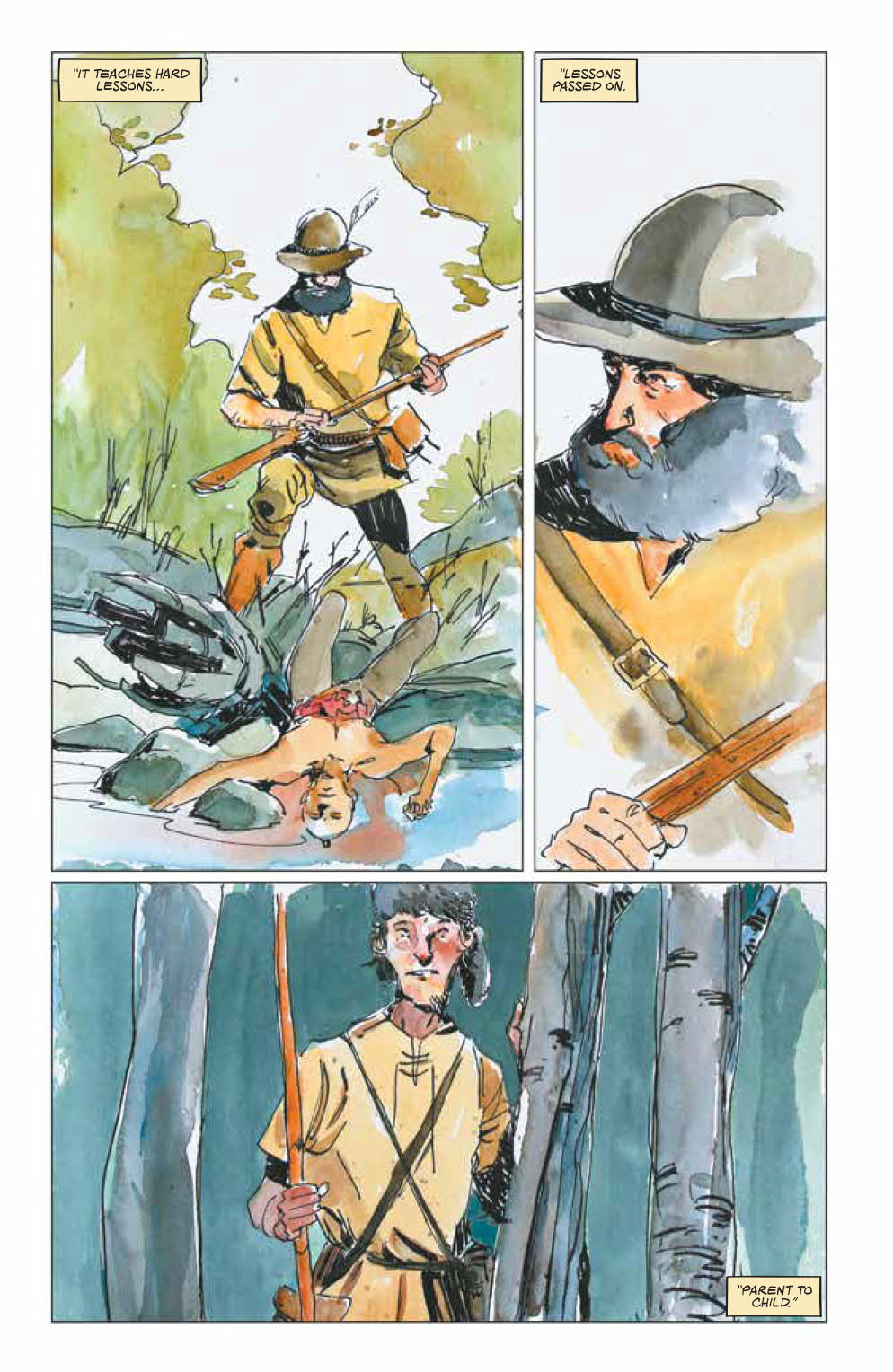 Jenkins has by far the most creative art I have seen in a comic this year. He is the Michael Jordan of watercolor artists. Every page of GRASS KINGS #2 is a bright and intricate assault on the eyes. Jenkins’ playful brushstrokes invoke conflicting emotions. The backgrounds of this issue are fuzzy because the events are fuzzy. When Robert remembers about the loss of his daughter, his flashback is in broad one-dimensional strokes. The art is less detailed, and the place is unspecified. Robert is entirely orange, while his wife is blue and purple. Robert’s inner monolog completely covers the couple’s dialogue bubbles. His world later shifts back to purple and blue, likely to indicate that his wife was “right” and to emphasize his guilt. Jenkins has perfectly captured what it is like to remember an event. It is all emotion, and the details are unimportant.

READ: Looking for another visually stunning comic? Check out our UNDERWINTER #1 review!

GRASS KINGS #2 is an unbelievably cohesive follow-up to the first issue. Perfectly bookended, the issue’s new set-ups and cliffhangers do not seem gimmicky. Kindt and Jenkins tell a personal story while retaining a serial form structure. Robert and the sheriff’s inner demons are laid out in this satisfying and visually stunning issue.