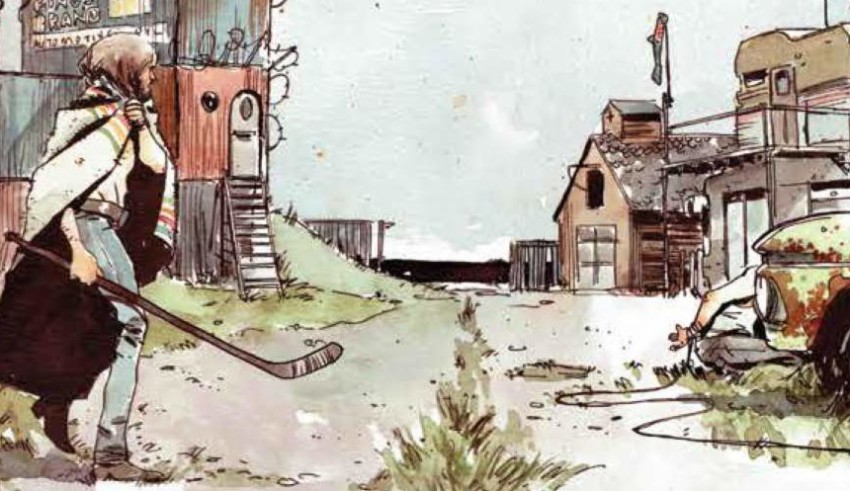 In GRASS KINGS #1, writer Matt Kindt and artist Tyler Jenkins turn the typical offbeat small-town mystery genre on its head. The genre’s common use of violence, melodrama, and eerieness is expertly contrasted with bright storybook visuals. A David Lynch style idyllic-small-town-with-a-secret-dark-underbelly is swapped out for a junkyard collective in Middle-America. However, fascinating art and an ingenious change of setting are hindered by a predictable plot. While GRASS KINGS #1 is a visually incredible start to the series, I am still unsure if Kindt and Jenkins plan to undermine the typical conventions of this genre, or if they will fall into its trappings.

GRASS KINGS #1 centers around three brothers who are rulers of an isolationist trailer park commune, the Grass Kingdom. This town is a hippie paradise, where its strange residents can live and work in self-governing harmony. However, the land has a violent history (told through a haunting opening sequence that I won’t spoil). Like most seemingly perfect small towns, there are dark secrets bubbling under the surface. When a mysterious young woman appears, eldest brother Robert is forced to come to terms with the tragic events of his past. 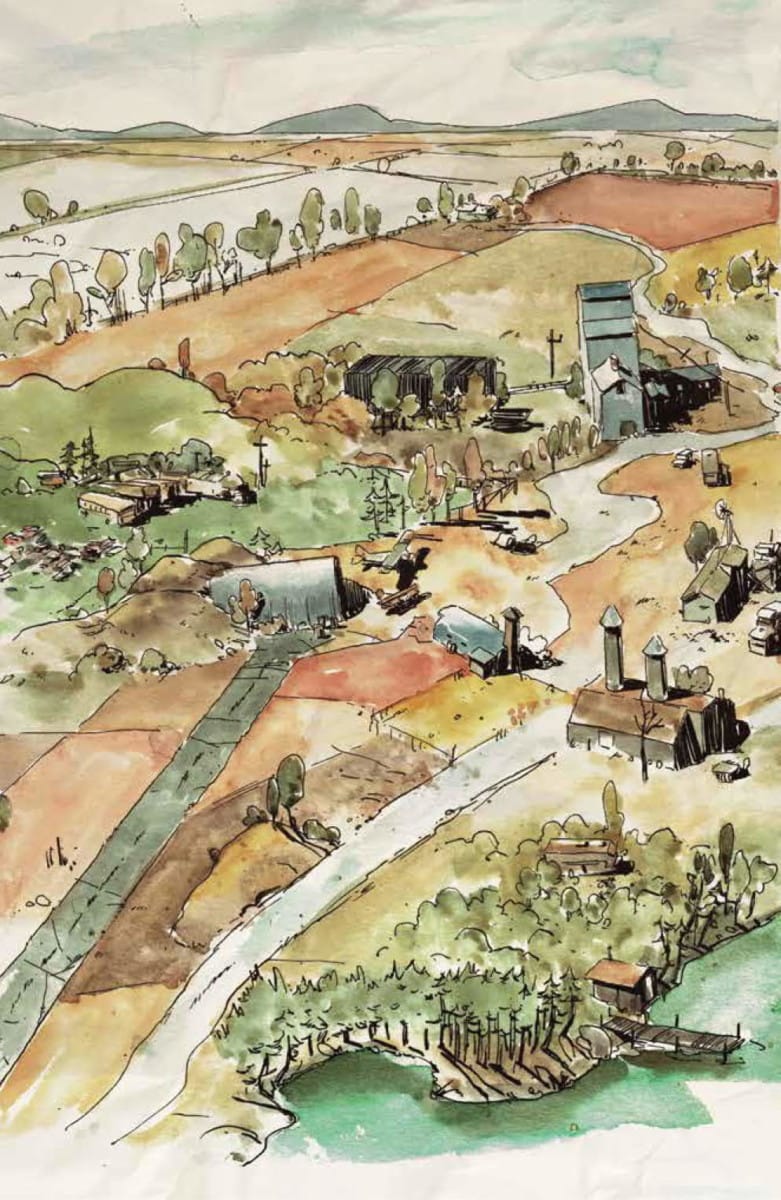 Kindt structures the beginning of GRASS KINGS #1 as a tour through the strange shanty town. This sequence is where the writing shines. A rowdy trespasser is captured by the Sheriff and driven through the Grass Kingdom. The Sheriff tries to sell the trespasser on the town’s ideals, but the trespasser is unconvinced. The debate between the two is a fascinating interplay and allows the audience to step into the shoes of the questioning visitor. The concept of small town Americans rejecting city-folk, government, and taxes is ripped-from-the-headlines conversation fodder. Kindt could have beaten us over the head with a preachy allegory, but instead, he chooses the more nuanced approach. The townspeople are not homogenous hillbillies or small town rubes; they are diverse in background and motivation.

Many townspeople are only briefly introduced, yet all the interactions are intriguing. There is a Simpsons-ish wacky mish-mash of residents. These characters, including a mohawked liquor store owner and an elderly pilot, seem to be living in a post-apocalyptic fantasy. In GRASS KINGS #1 we only get glimpses, but there is definitely more of this story to be told. I immediately wanted to know who they are, where they came from, and why they chose to live in this town.

From here, the issue loses some of its flavor. We meet Robert, the “king of the town,” who is haunted by the traumatic loss of his daughter. This is where GRASS KINGS #1 falls into the typical small-town mystery rut. There is a missing person in the town and the shiny homespun charm begins to pull away. TRUE DETECTIVE, TWIN PEAKS, GONE GIRL, and RIVERDALE (most recently) have all covered this territory. (For the best parody of this trope possible check out The Kroll Show skit, Dead Girl Town). The major plot elements are only glimpsed at in GRASS KINGS #1, so it’s still not clear how closely Kindt will toe this line. While these story elements are by no means boring or unreadable, I would like to see Kindt further explore the interesting new concepts he introduces. (Note: The preview for the issue even says, “For fans of TRUE DETECTIVE: SEASON ONE”).

If I could, I would give the art in this issue so many stars that it could have its own episode of COSMOS. Tyler Jenkin’s artwork is flat-out incredible. GRASS KINGS #1 looks like a watercolor painting in a kid’s storybook. Jenkins turns a few strokes of color on a plain background into an emotional portrait. The bright figures melt into stark white backgrounds, which provides an other-worldly and heavenly quality. Jenkins easily sells the magical nature of the town. His landscape shots are incredible. Fields, lakes, roads, and mountains are all expressive and haunting. Jenkin’s ability to do so much, with such little detail is awe-inspiring. The art style is perfectly suited to the story. The town comes across as so bright and airy, that you actually want to travel there. Yet its sparseness and unfinished nature show that those feelings may be hollow and short-lived. 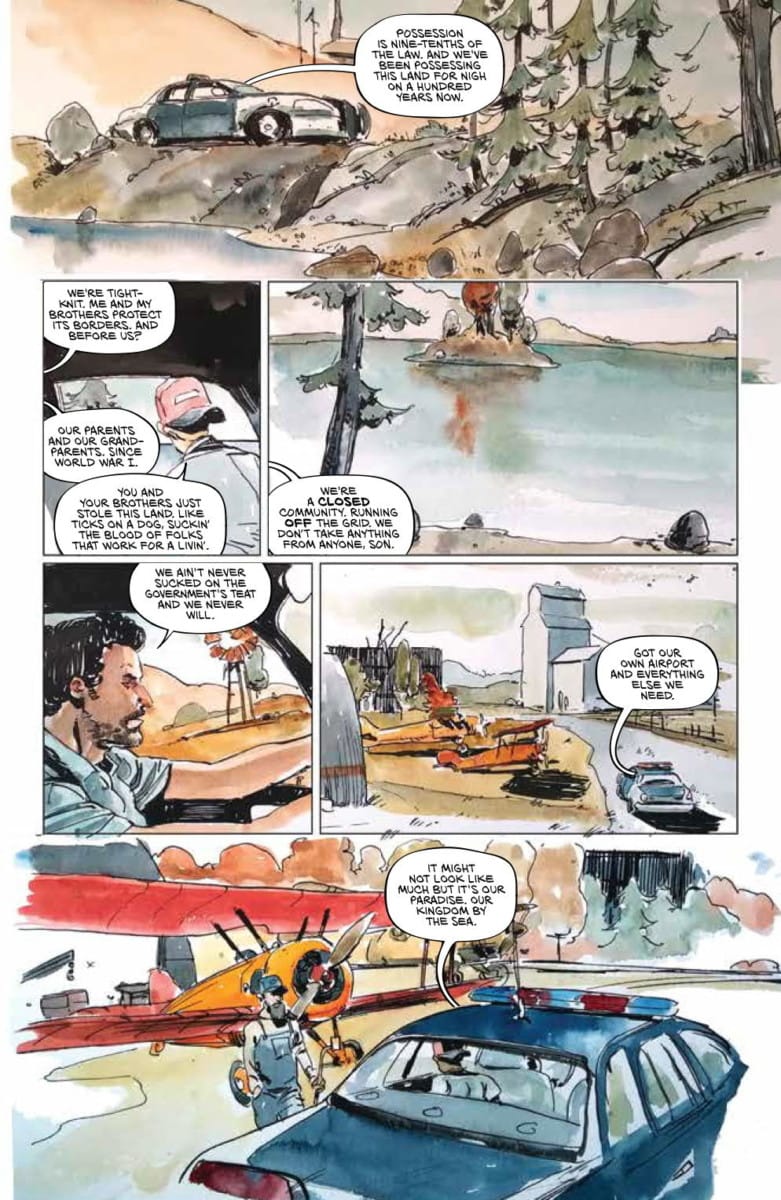 Jenkin’s mastery is evident in the fact that the hard-hitting, violent, and emotional images utilize the exact same techniques as the lighter scenes. The same bright watercolor palette is able to convey completely opposite emotion, yet still feel cohesive with the rest of the book. The idyllic fairy tale artwork is a perfect foil to the dark trouble brewing. In one scene, washed-out reds represent a beautiful sunset, but in another, the same are used as a splash of blood. In another, Jenkins subtly shows that day has shifted to night by changing a character’s face from green to purple. The entire comic is colorful and bright. Day or night. Violent or peaceful. Jenkins does not need to rely on the brooding and shadowy blacks like most comic book artists. He has his own visual language that is even more powerful. The artwork consistently preserves its vivid, otherworldly vibe.

Read: Want to check out some more comics from Matt Kindt? Take a look at Why Aren’t You Reading: ETHER.

Grass Kings #1 is an excellent start to what may become a fascinating series. As of now, the incredible artwork and compelling characters more than make up for the slightly predictable plot. Considering Kindt’s incredible characterization and past record, I am sure this series will hit it out of the trailer-park.