As I start my seventh blog on #bannedbooksweek, I’d like to thank Comics Verse for featuring this classroom review you can use. Readers of this blog, I suggest you head on over to https://comicsverse.com and check them out, and Comics Verse fans, please head on over to my blog http://www.theothercomicbookteacher.com and follow for classroom/personal comics/graphic novel reviews.

With that said, if you’ve been with me all week, I greatly appreciate it; send me some love and let me know which of the seven reviews from this week was your favorite. And when you are done here, make sure you head on over to http://www.thecomicbookteacher.com and check out his reviews from the week. This week has been so much fun for us that I think I’ll up my blogs to two or three a week; I already have tons of ideas in the pipeline.

Today, we will tackle a student’s nightmare and the best-selling author of all time: William Shakespeare. Don’t get me wrong, some students love them some Shakespeare- his themes are universal, and he single-handedly changed the English language- but most students see Shakespeare as a terrifying chore. And I do not blame them. I don’t feel that Shakespeare is taught well in most classrooms. Take my experience for example. I read two of Shakespeare’s plays in high school, and the majority of the pedagogy required us to read out-loud in class or for homework, and this reading was sprinkled with random quizzes, essays, and minor discussions. The language was difficult, the teachers non-inspired, and the result…a negative attitude toward Shakespeare. College was a bit different; as I explored Shakespeare through staging scenes and being somewhat more mature of a student, I naturally took more away from it. But when I had to teach it, I promised myself that I would not make the same mistakes that my English teachers made: Shakespeare is not meant to be read. Yes, you heard me right. We should not read Shakespeare. Did Shakespeare write his plays to be read by classrooms full of kids? No. He wrote them for actors that were preparing to act out his visions. So, generally, what we are doing with Shakespeare in the classroom is sort of silly; our students (for the most part) are not actors, and even fewer are Shakespearean actors. Shakespeare is meant to be watched! Not read…

Before you jump all over me, let me explain. For most people, Shakespeare is best understood when watched. I directed a much-edited version of Hamlet with some of my students a couple of years back. To prepare them, I took them to watch Shakespeare performed live at the Chicago Shakespeare Theater, and we watched a couple of film adaptations. After that, they were more engaged, inspired, and educated. I’m not saying there should be no reading of Shakespeare in the classroom. Actually, we need to physically read the plays in order to slow down the more advanced language and to appreciate the writing itself, but it should be part of the larger picture. 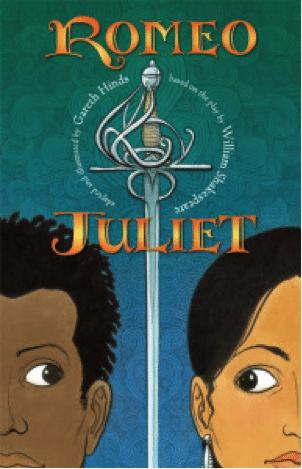 My research has found that students are much more successful when given choices as to what to do, read, and create in the classroom. With my sophomores, I read two of Shakespeare’s plays last year: Romeo & Juliet, and Hamlet. For both works, there were a ton of options given to the students. In our Compare/Contrast unit we focused on Romeo & Juliet. We started with the Baz Luhrmann film, and from there, the students had the option to read the classic Romeo & Juliet text or read Gareth Hinds’ amazing graphic adaptation. After that, I splashed in the film West Side Story and a couple of short stories and works of their choosing. The students then had to synthesize the sources and create an essay that compared and contrasted something from at least two of the works. I know it sounds a bit open-ended, but with some direction, the students ran with the idea and ended up turning in some amazing essays. My stand-out had to be a student that compared and contrasted the soundtracks from the Baz Lurhmann film with the soundtrack from Warm Bodies and focused on how music affected tone. Many of the students used the graphic novel in their comparisons, and many did not, but what I did was give them choices and encouraged them to watch Shakespeare, not just read it. But most importantly, my students were not hating on Shakespeare.

The Hamlet unit later in the year was a bit different. I wanted to see how students would react when given the option of reading the graphic novel (the No Fear version by Neil Babra) or the original text. Every time I give my students the option of original text vs. graphic text, the results are almost always half and half, and this was no different. I know what you’re thinking: you said students should not READ Shakespeare, why did you let half of your students READ the original text? The answer is two-fold: student choice is very effective, and I did splash in film clips to enhance understanding and promote discussion. But here’s some data for you…I had the students keep very accurate reading logs, and I found that the students that read the graphic novel spent an average of 50-minutes less reading the material, AND they scored 7% higher on the comprehension quizzes (86% over 79%): less time, higher gain. I had students beasting those quizzes that were struggling earlier in the year. The ability and choice to read a graphic text raised many students’ grades, and during class discussions and assessments, you would not have been able to tell which batch of students read which text; they were all invested and included. Score one for the graphic novel and choice in the classroom!

I can go on and on about this “comics in the classroom” stuff, but I understand that we all have other things to do (well, maybe you do). However, if you would like to hear more about what I did, or if you just want to discuss these ideas further, hit me up on Twitter @comics_teacher or email me at mr.kallenborn@gmail.com; I’d love to hear from you.

Thanks for a great week, and I hope you were able to take something away.
Happy reading, everyone!