All of the elements were present- the alleyway, the pearls, the gun. There was a funeral. That was it.

What is GOTHAM without Batman?

The focus of Fox’s new TV show, “Gotham,” is not on the superhero-to-be, but is instead on new police officer Jim Gordon and his partner Harvey Bullock. The dynamic is very good cop/bad cop, with Jim’s straight-edge ways clashing with Bullock’s dirty cop methods. The pair stumbles their way through Gotham’s underground on the search for the killer of Thomas and Martha Wayne. Along the way, they cross paths with many familiar faces. They meet up with Catwoman, a young street orphan and Poison Ivy, a young girl with a fondness for plants. (Although this iteration ditched the “Pamela Isley” name and opted instead for Ivy Pepper). Additionally, the meet The Riddler, an intriguing crime lab analyst with a penchant for riddles; Penguin, a despicable underling in Fish Mooney’s criminal empire and of course, Fish Mooney and Falcone, two crime lords vying for control of the city. 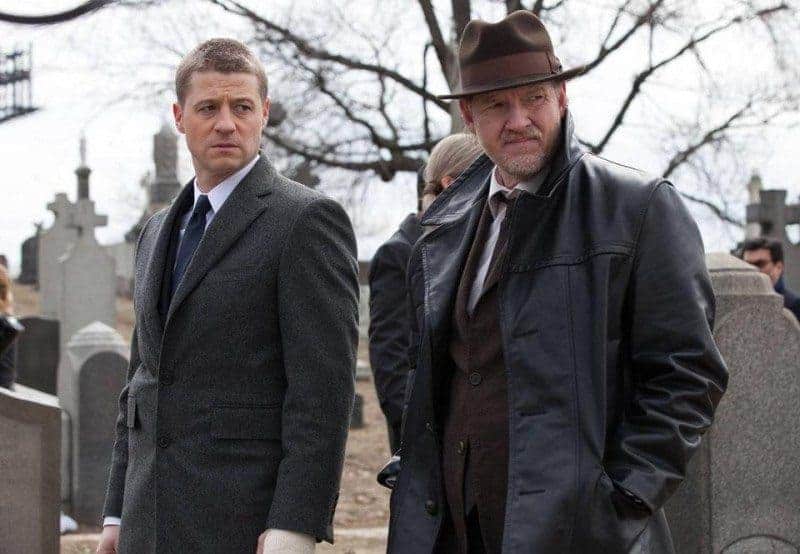 It’s in a graveyard, so it must be gritty.

The show feels wonderfully gritty, with a lot of action and a rather fast pace. It is legitimately one of the fastest-paced shows I’ve ever seen. Entire clues or subplots seemingly resolved in a series of 3 or 4 quick-cut scenes. The pacing was a downside to the first episode of the show. Some cool moments and stories seemed squeezed too tightly together. They felt cut short or crammed in too fast. Too little chance for character exploration and development felt overwhelming.

These storylines will all be explored further in future episodes, but why not delay certain plot details for a few episodes? The Renee Montoya/ Gordon’s fiancée plotline could have been much more surprising a few episodes down the line after the audience forms an opinion about both characters.

The Look of the Show

This is one downside among some incredible acting and amazing aesthetics. Truly, the is one of Gotham’s grittier representations, and yet, Vibrant colors appear throughout GOTHAM. We see a transformation between day and night, light and darkness. At night, the colors remain behind, and we see the dismal and violent nature of the Dark Knight’s city. The only visual effect I didn’t care for occurred during a chase scene where Jim Gordon ran with a steady-cam. It interrupted the scene and looked rather odd.

The Acting Prowess in GOTHAM

The actors portrayals appear top-notch. Jim Gordon and Harvey Bullock’s relationship well-represent the comics version. Harvey Bullock seems a little too dirty, though. It’s hard to see he has redeeming qualities. He’s one of my favorite characters in the Batman universe, but I found myself looking for a reason to like this version.

Some of my favorite characters appeared. Falcone and The Riddler. The Riddler’s introduction easily made the most subtle performance of all of the major characters in the show. Fans of the character certainly picked up on the riddles, and particularly Riddler’s shocked face, when Gordon got his riddle correct. Falcone, on the other hand, got a cool monologue, which painted his character as a much more noble one than that in the recent Nolan Batverse. His monologue was probably my favorite part of the first episode.

The Penguin failed out of the South Harmon Institute of Technology

Another cool representation award goes to Penguin. I typically am not a fan of Penguin. However, there’s something inherently twisted and evil in this version. The show changing his stature from a short and fat in the comics also help the character appear more intimidating. It’s much easier to accept who the Penguin is. I honestly look forward to seeing where things will go from here for him. He did have one pretty awkward scene at the end with a ham sandwich. Though I got the animalistic side they were trying to represent, it still made me laugh, which I’m sure the creative team didn’t intend.

If you’re looking for comic book comparisons, the most obvious is GOTHAM CENTRAL. This show is not a Batman show. It is a GCPD show. It feels like a cop drama that just happens to take place in Batman’s universe. We’re seeing a lot of familiar characters that were developed in the three seasons of the comic series. Both follow the Gotham police force, so it would be difficult not to draw the comparison.

Viewers hoping for a Joker sighting may have gotten excited at the sight of a stand-up comic auditioning for Fish Mooney. The smile was pretty broad, and he did witness some pretty horrifying events. It could be the kind of thing that radically changes a man’s life for the worse. And, it could ultimately be kind of cool to reveal that Joker was present in the show the entire time, even from episode one. Plus, it would match pretty well with the Joker origin presented in The Killing Joke.

Who’d have thought someone called The Joker would be so bad at telling jokes?

So, chalk that up to Possible Joker Sighting #1: The Stand-Up Comic.

Overall, as far as pilots go, I have to give this one a 3.5/5. The writing wasn’t anything spectacular- there were a few cheesy lines and moments, although the overall plot was very intriguing. It was a bit too fast-paced, and squeezed a little too much into this first episode, leaving things a bit underdeveloped, even for a TV show. The acting was pretty great, and the characters are all pretty satisfying in their current iterations, except for Bullock, who seems a little too evil. This is one of the best looking Gothams that I’ve seen, though, and I know I’ll be coming back.