In December 2016, Warner Bros. announced that they were developing a SUICIDE SQUAD spin-off film based on the comic GOTHAM CITY SIRENS. The movie will focus on DC’s most famous female villains/antiheroes: Catwoman, Poison Ivy, and Harley Quinn.

Although, I welcome any opportunity to see badass females on-screen — when I first heard the news, I was hesitant to get excited. My primary reason for this came from the fact that all three characters are canon queer women. And, usually, any form of representation in the media can be a minefield to step in.

It Is Canon, People!

Before anyone brings up the question of whether these characters are actually queer, let me say it straight: They Are. In CATWOMAN #39 by Genevieve Valentine, Catwoman officially came out as bisexual kissing Yakuza heiress/vigilante, Eiko Hasigawa.

On the topic of Catwoman’s canon bisexuality, Valentine stated:

“She’s flirted with it – often quite literally – for years now; for me, this wasn’t a revelation so much as a confirmation.”

For Poison Ivy and Harley Quinn, from the moment they first meet, their comic book chemistry is undeniable. As a criminal duo, they compliment each others’ talent and have threatened the likes of Gotham and Batman several times. As a couple, these girls share a relationship filled with humor, trust, and affection. This is demonstrated by their kisses in comics like DC BOMBSHELLS #42 and HARLEY QUINN #25.

On top of which, on Twitter, the writers of the HARLEY QUINN series, Jimmy Palmiotti, and Amanda Conner, confirmed their queerness with the response:

“Yes, they are Girlfriends without the jealousy of monogamy.” 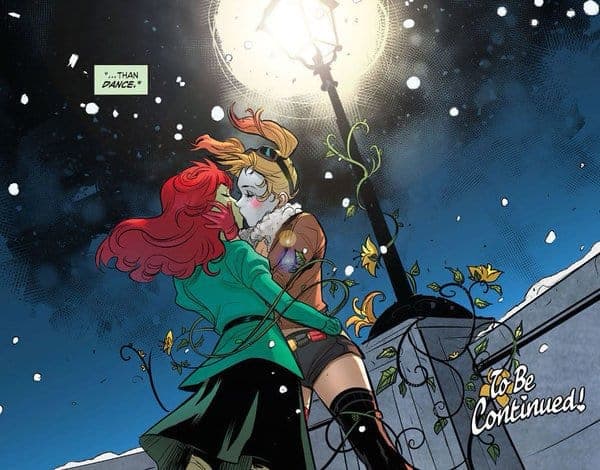 When it comes to female and queer representation on screen, viewers are left with a bitter taste in our mouth. And why shouldn’t we? When certain tropes like Bury Your Gays, in which queer characters are often killed off by a weak plot device, usually to further advice straight characters’ storylines, exist; or when female sexuality is treated as irrelevant or used specifically for male titillation. Let’s get into a few…

LGBT+ Characters in Comics: Where is the Representation?

Queerbaiting, as Poison Ivy would say, is a major thorn in the side. This trope consists of hinting at a potential same-sex relationship. Even teasing with subtle glances and flirtations that hint at something, yet… never actually deliver it.

When it comes to queer characters and relationships on film and screen, often producers will toy with the audience’s emotions. They will tease the possibility of significant queer characters on screen, without any hope of canonizing queer romance or sexual attraction. (*COUGH* BBC’s, SHERLOCK).

Then, when the audience calls the producers out on this problematic trope, fans are dismissed and ridiculed. When it comes to relationships on screen, heteronormativity, which is the belief that human beings fall into explicit binary roles of men being attracted only to women and vice versa, is considered the default.

Though better queer representation has increased over the years, representation of queer characters and heterosexual ones still linger on an uneven scale favoring the latter. The essential problem with queerbaiting though is as Emily Roach from The Mary Sue puts it:

“It’s an exploitative way of encouraging queer fan investment without risking the loss of an assumed heterosexual audience.”

It’s not dangling catnip before a single kitten. It’s tempting a starving audience with a decent meal, and then snatching it away from them with a smack on the hand, saying ‘No, not for you.’

Catwoman and Eiko Hasigawa in CATWOMAN #39

One of my biggest pet peeves is when strong, powerful women are reduced to sexy background characters for male heroes. Catwoman is a stunning flirt, a dexterous cat-burglar, and one of DC’s most famous legacy characters. Harley Quinn is a medically trained psychiatrist with incredible acrobatic skills and a twisted sense of humor who finds her equal with Poison Ivy. Ivy is one of the most gifted and dangerous botanists in Gotham.

These women have talents and legacies all of their own. However, they are often only focused on within the context of their relationships with other men. In comics, film, and television, the media has often chosen to focus on their importance as love interests or fatal attraction.

For example, Catwoman as Batman’s love interest, Harley Quinn as the Joker’s girlfriend, or Poison Ivy and her ability to seduce any man (and kill them with a kiss.) Their sexuality is often reduced to scanty clothes (usually designed by male artists). And, without full consideration of their autonomy as sexual, multifaceted human beings.

If any of these women do display their queerness on screen, then there’s the threat that it will be sexualized to the point of fetishization. I’m afraid their orientation will be reduced to being seen as merely as two “girls” passing the time by “experimenting” before going back to being a male character’s girlfriend.

6 LGBTQ+ Comic Creators You Should Be Reading

Now, these women apparently hold an exceptional place in my heart. I grew up with them in Saturday morning cartoons like BATMAN: THE ANIMATED SERIES. They planted the seeds (yes, I made a Poison Ivy joke) for my love of comics that grew as I did. Later on, I rejoiced as each of these characters came out on the page. They provided much-needed validation for the queer comic book community.

Which is why their queerness needs to be respected. Instead of merely teasing the audience with their potential queerness, or fetishizing them within the context of straight male desire, let them be who they are.

Let Catwoman steal all the jewels and hearts of Gotham. And do so, without being told that she’s just in a phase or experimenting. Let Poison Ivy and Harley Quinn fall in love on screen in every subtle and passionate way possible — like any other heterosexual couple. Let these ladies be who they are, and trust me — the audience will love them too in no time.