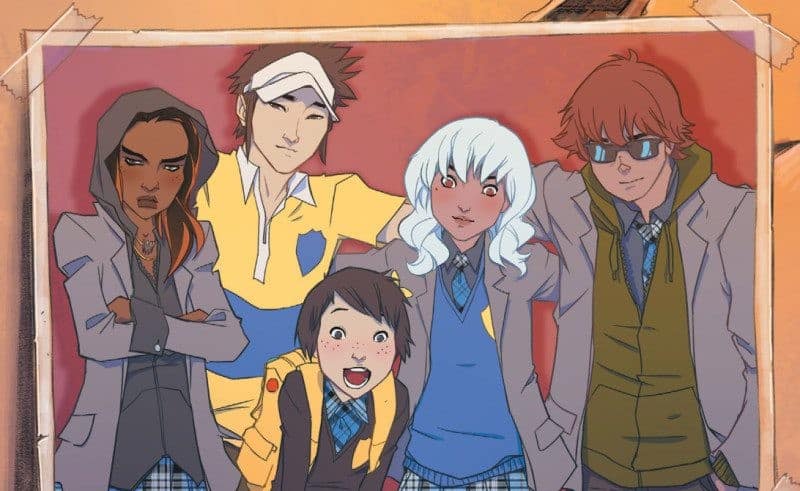 GOTHAM ACADEMY #9 follows the school’s self-appointed Detective Club as they hunt for a mysterious monster whose been terrorizing the campus. All the while, Olive Silverlock is still trying to process the death of her mother and the ramifications of her mysterious life and death. 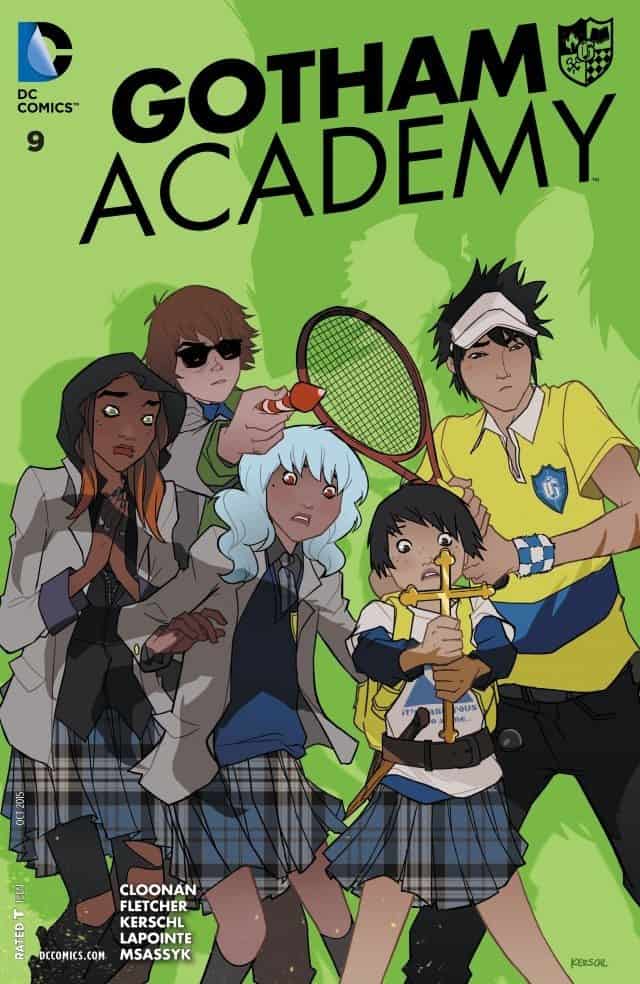 The ninth issue of GOTHAM ACADEMY begins with members of the Detective Club (Maps and Kyle Mizoguchi, Colton Rivera, and Pomeline Fritch) tracking down their cohort Olive Siverlock in the woods surrounding the school. Olive had been wandering reading the letter her mother had left for her before she passed away (see GOTHAM ACADEMY #8) but quickly hides it when the gang appears and Maps excitedly tells her that they’re hunting a monster.They eventually find fur belonging to the mysterious beast, which Colton analyzes in his lab (actually an RV abandoned in the woods) and determines that it’s in the Lupus Family, immediately leading Pomeline to determine they’re hunting a werewolf. 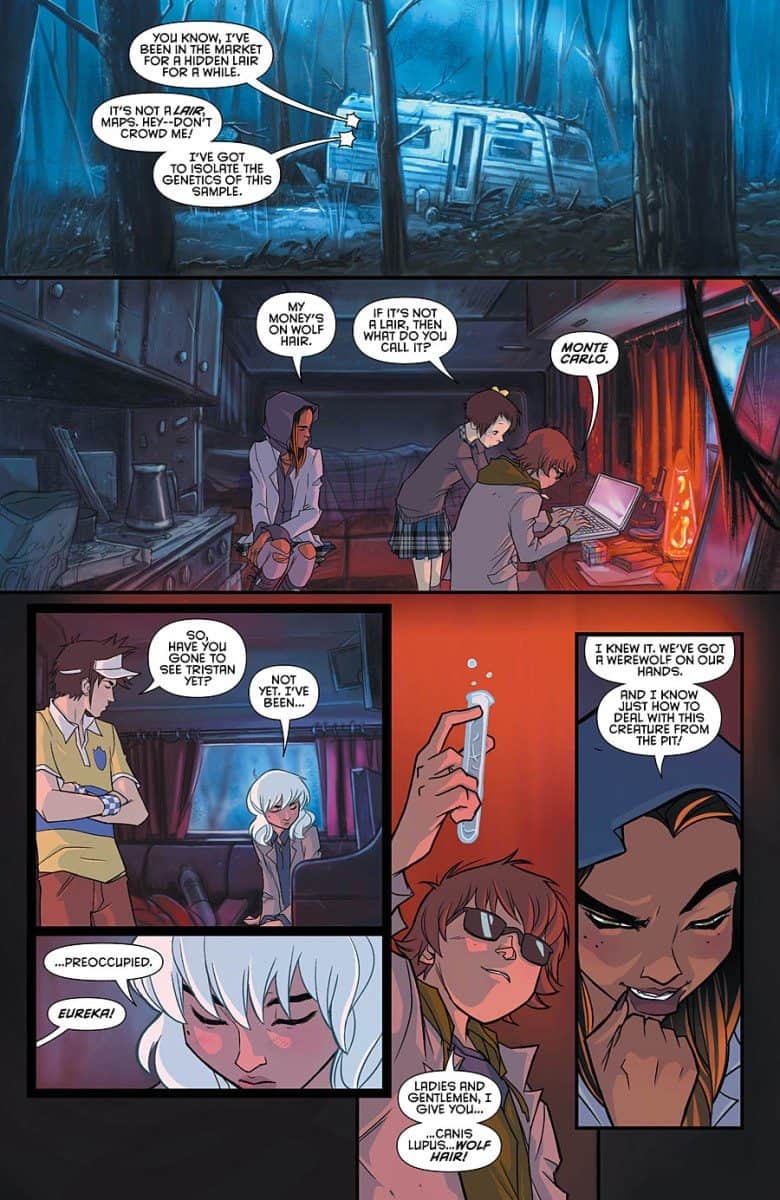 Olive returns to her room that night to find Maps’ mysterious roommate Katherine rummaging through her room, but the girl flees before Olive can figure out what she’s doing. As if that wasn’t confusing enough, someone mysteriously slips a file under the door that reveals details about Olive’s mother and how she got into Gotham Academy in the first place. She goes to talk to Professor Hugo Strange (yes, that Hugo Strange) and he reveals that Olive was placed in the school due to her mom’s incarceration in Arkham under the name Calamity, though only Headmaster Hammer knows all the details. Unnerved, Olive goes to visit Tristan (who is still recovering in Professor Langstrom’s office); however, they are attacked by the werewolf creature. Tristan turns into his man-bat form and knocks the wolf out the window before he can do much harm.

The Detective Club hatches a plan to incapacitate the wolf, however it attacks before they can put it into motion. Olive hears a voice inside her head telling her to use her mysterious fire-conjuring powers, which she almost does before Colton shoots the wolf with an antidote dart, reverting him to his true form, the identity of whom you’ll have to read the book to find out. Later on, Pomeline reveals to Olive that she was the one who slipped Olive’s file under her door after stealing and reading the note from Olive’s mother. The story ends with the two confronted with a cliffhanger that should impact the book for months to come.

Plot-wise, GOTHAM ACADEMY #9 brilliantly walks a fine line between telling a self-contained mystery story while advancing the overarching plot of the series. We learn a great deal of new information about Olive’s mother and the whys and hows of Olive’s entry into Gotham Academy, the end of the issue lays the groundwork for a major character arc involving Olive. Even with this, the issue tells a very entertaining self-contained story. The werewolf plot taps into the obvious SCOOBY DOO and BUFFY THE VAMPIRE SLAYER inspired elements that have been part of the series since the beginning, with the gang coming together to investigate, and eventually defeat the werewolf and uncover his true identity. 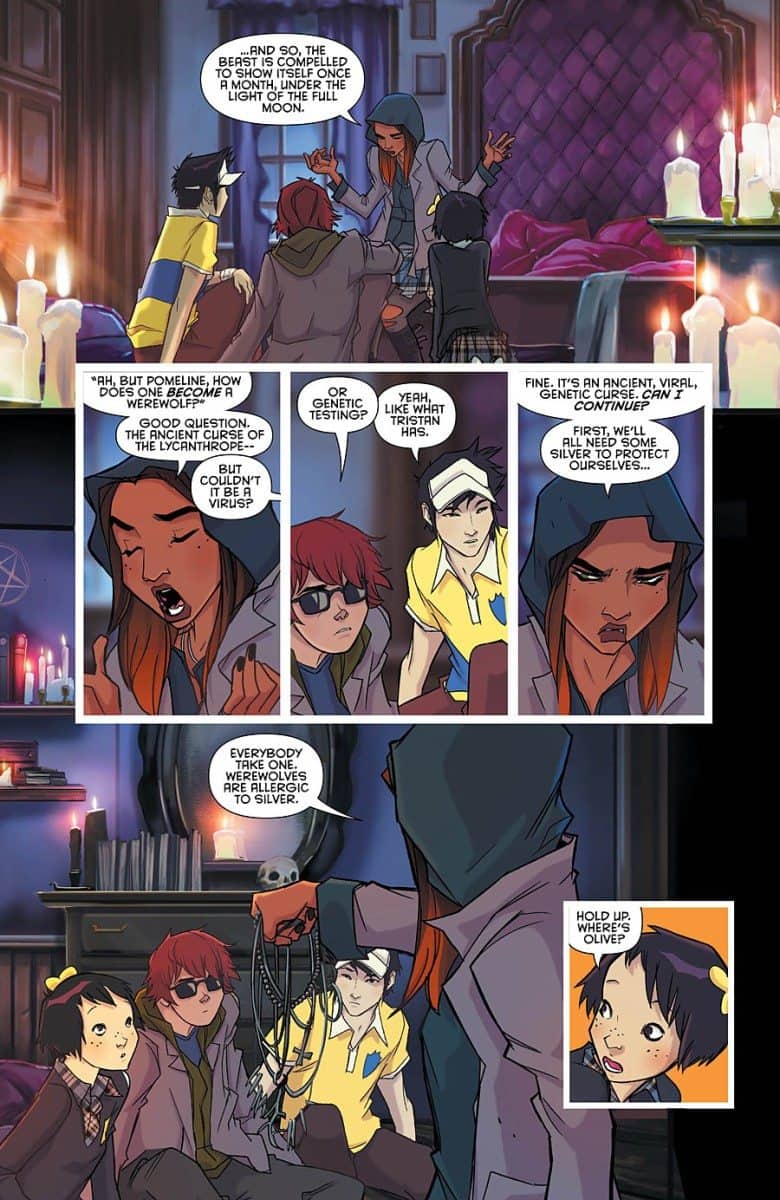 From a character standpoint, this was one of my favorite issues of the series so far. Nearly all of the members of the main cast are given something to do within the plot. Olive copes with the continuous stream of revelations about her mother and her own past, while still being there to aide her friends. Pomeline not only gives the group a lesson on werewolves, but later reveals it was she who found the information on Olive’s past. Colton’s character is expanded a bit, taking him from solely being a firework-toting troublemaker into a bit a scientist, right down to his secret lab. Maps, who continues to be my favorite character in the book, isn’t quite as integral to the plot, but her unbridled enthusiasm (such as the detailed drawn and copy-written plans she provides to stop the werewolf) bring a great deal of joy to the book. Only Kyle is given a bit of a short-shrift in the story, which is okay since he was such a focus of last month’s issue.

Artistically, Karl Kerschl knocks it out of the park this month. While that can be said for pretty much all his work on this series, this month has a bit of a different feel to it. Taking a cue from the Scooby Doo-esque plot, the artwork has even more of an animated look than usual, full of kinetic energy and interesting panel layouts. The first page is a particular highlight, as it’s set up as a misdirect where it appears that Olive is being stalked by the wolf only to reveal it’s actually Maps approaching her. 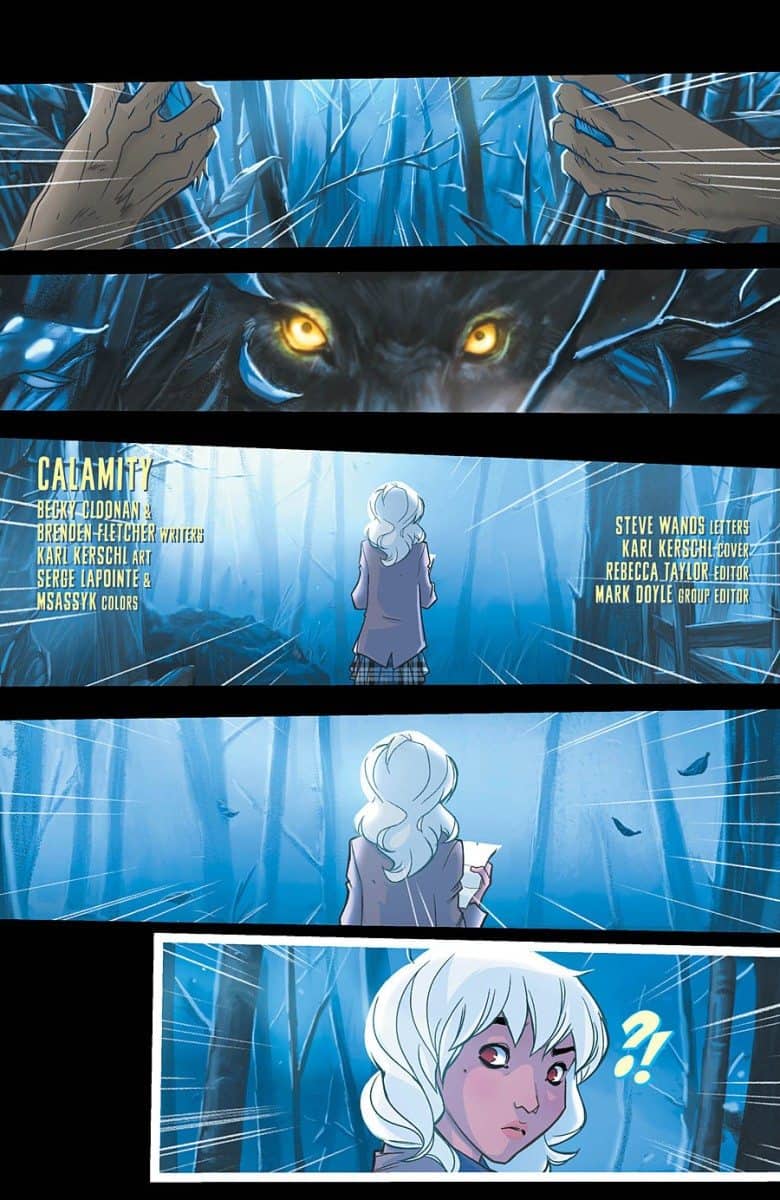 GOTHAM ACADEMY continues to be my favorite all-around monthly comic right now, and #9 is another home run from the creative team of Cloonan, Fletcher, and Kerschl. The single issue mystery story is blended perfectly into the on-going mythology of the series, and the animated artwork makes the book a joy to look at. As cliche as it is to say, if you’re going to buy one comic book this month I recommend this should be it.

CHECK OUT MORE FROM BRIAN!