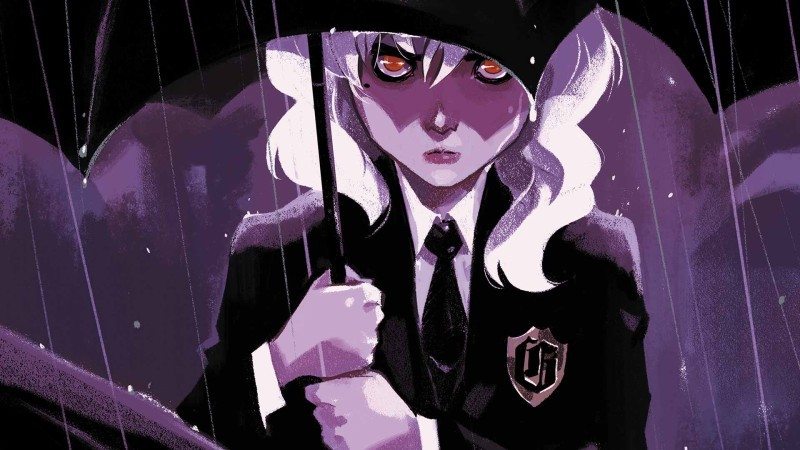 The eighth issue of GOTHAM ACADEMY is one of returns. Regular artist and series co-creator Karl Kerschl rejoins writers Brenden Fletcher and Becky Cloonan to tell the tale of Olive Silverlock’s return to school after a mysterious family tragedy. 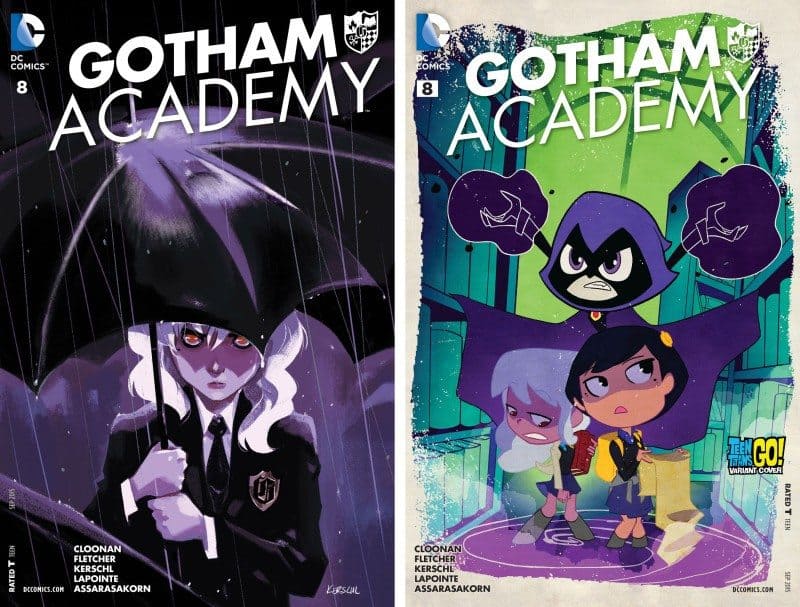 GOTHAM ACADEMY #8 kicks off by confirming what many readers, myself included, had suspected at the end of the previous issue, namely that the Olive Silverlock’s mysterious mother has died. Olive’s ex Kyle and his sister Maps arrive at the funeral, and the former initially attempts to comfort Olive, only to see that the mysterious Tristan is already doing so. The setting then switches back to the Academy, where Kyle follows Tristan back to Professor Langstrom’s (a character that should be instantly recognizable to Bat-fans) office and inadvertently learns that Tristan is a Man-Bat (which Olive and us readers have known since issue five).  After Olive rebuffs his attempt to warn her about Tristan, Kyle recruits Maps to help him find out everything they can about him. The two sneak through the Academy’s secret passageways, and after eavesdropping on a bit of Olive’s therapy session they confront Tristan. He transforms into his man-bat form and flys off, but the two follow and eventually find him gravely wounded. They rush him back to Professor Langstrom, then Kyle goes off to find Olive, and the two share an emotional moment where Olive finally confesses to Kyle about her fire control abilities. However before Olive can figure out where either Kyle or Tristan fits in her life, she receives a letter that could change everything. 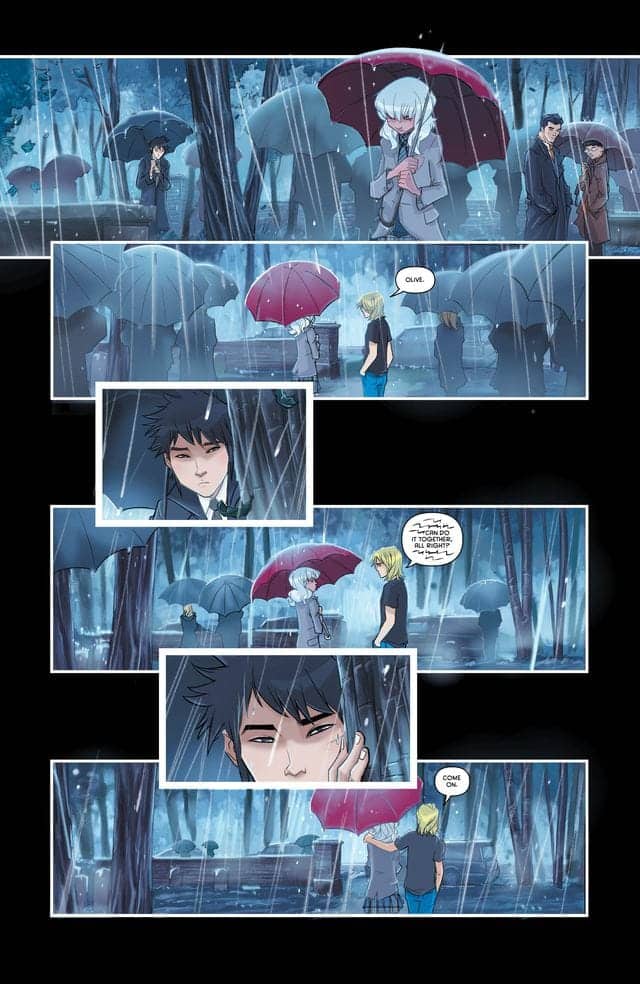 GOTHAM ACADEMY #8 was a very different book than I was expecting. Everything from the cover to the solicits to the end of the previous issue led me to believe that it would be story centered on Olive dealing with the death of her mother. While Sybil Silverlock’s death does hover over the book like a cloud, the story within isn’t about her daughter. In fact, almost every time we see Olive in the book it’s through the eyes of the other characters. Instead it focuses on Kyle and Maps trying to figure out how to help Olive deal with her mother’s death and “protect” her from Tristan. I believe it was a genius decision by co-writers Brenden Fletcher and Becky Cloonan, as it allows the slow-burn reveal of Olive’s backstory to continue , and leaves the reader curious as to how Olive’s mother died, especially give the reveal on the book’s final page.

As is always the case in this book, the characterizations are completely on-point. Olive secluding herself from everyone but Tristan makes perfect sense for her character. Maps is as excitable and adorable as ever, and the scene where she learns and reacts to Tristan being a man-bat is one of my favorites of the series’ run so far. Kyle is given more screen time in this issue than he’s gotten at any other point in the series and it does his character development well. The brother-sister dynamic between the two is spot-on, and is something I hope we see more of in the months to come. The other main development in this issue is the revelation of the relationship between Langstrom and Tristan. The creative team, especially Ms. Cloonan, have stressed many times (including in our exclusive Comicsverse interview) that the HARRY POTTER series was a major influence on GOTHAM ACADEMY and it really shows here, as the relationship between the two man-bat characters is very similar to that of Professor Remus Lupin and Harry in the Potter books. 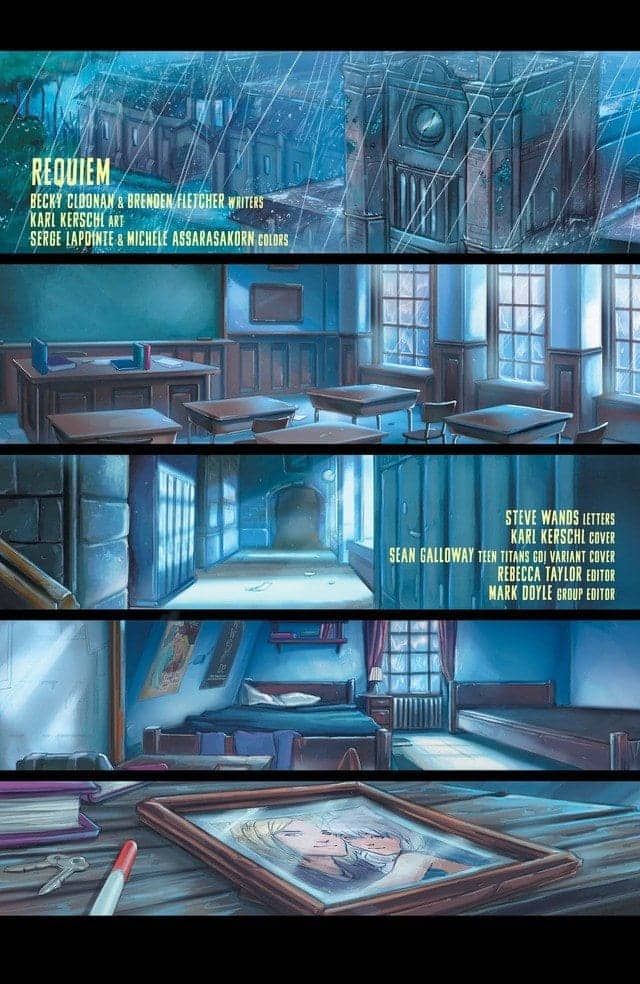 While I was a big fan of Minjue Chen guest art in last month’s issue, it’s great to have Karl Kerschl back drawing GOTHAM ACADEMY. His adaptive, almost animated style has been a asset for the book since it began, and it’s especially effective here. The funeral scenes at the beginning of the book are gorgeously moody and almost bleed sadness off the page. Juxtaposed to this are all the scenes with the Mizoguchis, both of whom pop of the page with energy. Also of note, the  colors by Serge Lapointe and Michele Assarasakorn compliment Kerschl’s work perfectly.

GOTHAM ACADEMY #8 is another very strong installment in what’s quickly becoming my favorite series to read each month. The story is a multi-layered character piece in its own right and lays the groundwork for numerous mysteries that should play out in the coming months.