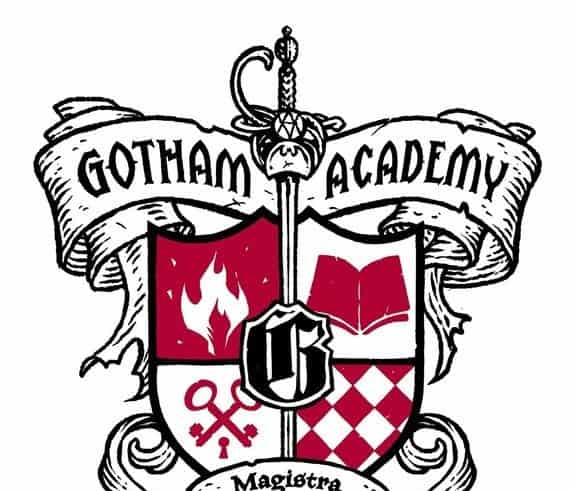 After the two-month Convergence break, Brenden Fletcher, Becky Cloonan, and guest artist Mingjue Helen Chen are back with the 7th issue of their Gotham-by-way-of-Harry-Potter series Gotham Academy! 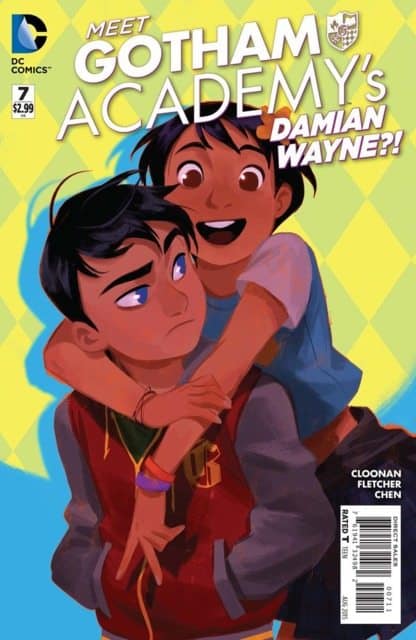 The book kicks off with series co-lead Mia “Maps” Mizoguchi sitting through an English class on Edgar Allen Poe’s The Raven as taught by Mr. Scarlett (AKA The Bookworm, a 60’s TV series Batman villain who serves as a librarian and faculty member at Gotham Academy). However, Maps has no time for Scarlett’s overly emotive reading of Poe’s poetry, as she’s too busy scouting her classmates to figure out which of them is qualified to join the Detective Club that she and her friends formed at the end of issue 6. Scarlett doesn’t take kindly to Maps’ wondering attention span and begins to scold her when suddenly one of the boys whose names she’d written on her potential list lunges at the teacher, but is subdued by the new student in the class before he can do any damage. 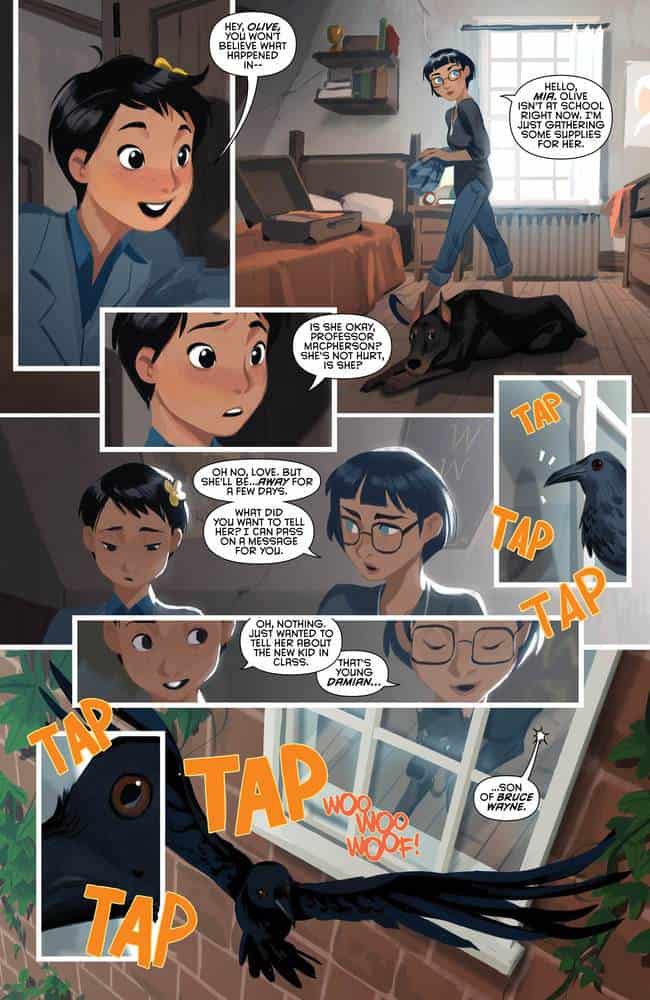 Maps’ rushes to Olive’s room to inform her what’s happened, only to find Professor Macpherson packing a bag of her best friends’ possessions. When pressed where Olive is, the professor ominously says she’ll be away for a few days before changing the subject to the new student, revealing to Maps that his name is Damian Wayne. Armed with this information, she finds Damian in the school’s courtyard doing martial arts. She begins writing his name down his name in her notebook when suddenly the two are physically brought together, and their hands interlocked in an embrace that neither of them can break. Maps quickly realizes that she was writing Damian’s name with the same feather quill she had been using in class earlier and attributes the current situation to its magic, to Damian’s annoyance. Before she can espouse further on her theory a raven swoops down and takes the quill. With nothing else to do, Maps announces that she has a friend who “knows lots about magic” and heads off to find Pomeline, dragging a reluctant Damian behind her. 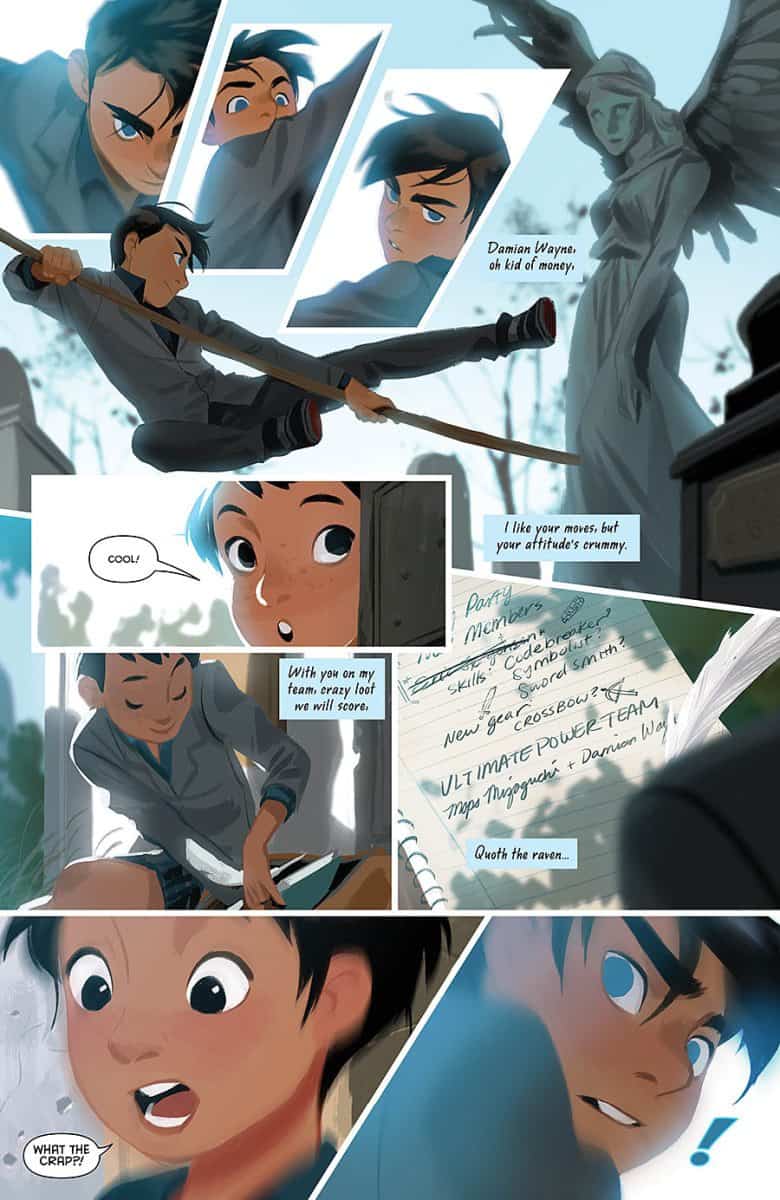 Much to Damian’s chagrin, Pom agrees with Maps’ magic theory. Furthermore, she gets Maps to reveal that the she had taken the quill from Headmaster Hammer’s office during the events of issue 5. Damian is unwilling to believe any of the magic-talk, attributing what’s happening to some freak natural event or possibly a plot against his father. Before he can theorize further, Pomeline is seeming overtaken by an outside force and pushes Maps and Damian out the window. Barely hanging on to the ledge, Damian has Maps reach for a grappling hook on his belt. Maps does so, and after fangirling over the very idea of holding a grappling gun fires it to the adjoining building at Damian’s instructions. The two tumble through another window only to encounter Maps’ brother Kyle Mizoguchi, who seems to be under the same influence as Pomeline. He tries to attack the two, but Damian quickly incapacitates him.

After their encounters with the seemingly possessed Pomeline and Kyle, the two seek out Professor Macpherson. When she hears their story, she quickly relates it to a tales she heard during her youth in Scotland about an abandoned castle full of birds that could control the minds of children. However the problem was actually caused by a strain of avian flu carried by the birds that nested in the castle, and was eventually stopped by Batman. Olive theorizes that the quill was made from a feather belong to one of the birds. Meanwhile Damian, realizing that the castle belonged to one of his ancestors, Contarf Wayne, finally begins to suspect that what’s happening is more than simple coincidence.

The three set off across campus to find the raven and quill, dispatching several more possessed students as they go. When they encounter the raven, Damian pulls out a batarang much to Maps’ excitement. She asks him if he’s Batman, but he ignores the question and uses it to knock the quill away from the raven. Scarlett appears seemingly out of the blue, and tells them the quill was infected with the avian flu and that they must get to the infirmary immediately. Before they can question the situation more, the force compelling their hands to stay together breaks, much to Maps’ chagrin.

In Headmaster Hammer’s office, Damian takes the fall for the stolen quill, getting himself expelled much like his father did. As he’s leaving, Maps chases him down to tell him that someone had crossed out their names in her notebook, and theorizes that that’s the reason their physical link broke. Damian dismisses her, but does give her a batarang for protection before disappearing much like his father does. Maps is ecstatic at the gift, but her happiness is short-lived as Professor Macpherson finds her and tells her the two of them have to talk about Olive, ending the issue.

Gotham Academy #7 reads less like an issue of the on-going series, and more like a Gotham Academy Maps one-shot, since the book’s protagonist Olive Silverlock doesn’t appear, and the rest of the cast have little more than cameos. That’s not necessarily a bad thing however, as the book’s heavy focus on the ebullient Maps is a nice welcome back to the series after the Convergence break. The guest spot from Damian Wayne is very well done. The interplay between he and Maps is brilliant, as the writing team of Cloonan and Fletcher play their personalities off each other perfectly. Maps’ nerdy love for Damian’s bat-tech is a particular highlight, though I do question if Damian would be quite so cavalier about pulling them out in front of someone he just met. Wayne’s appearance also falls in line with the book’s general no-costumed kids aesthetic, as he never appears in costume (in fact the word Robin doesn’t at all appear in the book).

Mingjue Helen Chen fills in for regular series artist Karl Kerschl, and the book’s art doesn’t lose a step. Since the work of both artists is somewhat inspired by Japanese anime, the book still looks like the Gotham Academy readers are used to. However, Chen definitely brings her own sensibilities to the book. The scenes of Damian and Maps fighting their way across campus towards the end of the book really pop off the page, and her slightly older looking Maps design fits well with the Maps-centric story. The highlight scene to me was the grappling hook scene, which in both art and dialogue paid homage to Tim Burton’s 1989 Batman film. 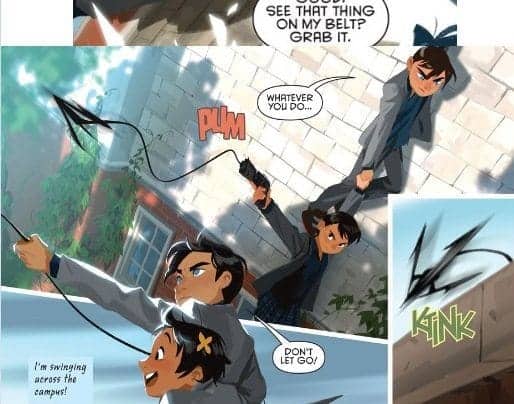 Gotham Academy #7 is another strong entry from one of the best titles in DC’s current roster. While it feels more like a one-shot that a regular issue, the creative team tells a very strong story focusing on Maps and guest star Damian Wayne. The brief mentions of Olive throughout the book also build anticipation for her seemingly unhappy return next month.