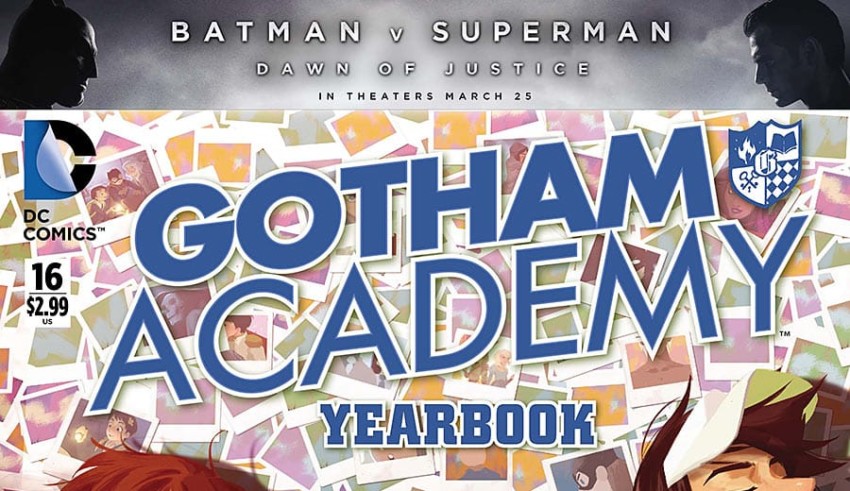 As with the first two issues of the arc, GOTHAM ACADEMY #16 begins with an interstitial in the present. This time it features Maps’ sometimes-associate Robin breaking into her and Olive’s room to look at their self-made yearbook. The first story Damian comes across is a tale entitled “Maps’ Day Out” (from writer James Tynion IV and artist Christian Wildgoose). Here we see Maps bribe Colton into helping her sneak into police headquarters as a way to meet Batman, fulfilling a dream she’s literally drawn out. While Colton is able to distract the officers, a coffee buzzed Maps ascends to the roof and lights the bat-signal; however falls asleep shortly afterwards. She wakes up in her own bed, but finds her drawings seemingly signed by the Dark Knight himself.

Robin doubts that his father would do such a thing but is forced to flee the room by Pomeline’s and Olive’s arrival. This prompts Olive to recall a particularly boring Sunday and leads into the book’s second story “Boring Sundays” written and illustrated by Ken Niimura. The story tells of a Sunday at the school when Maps was desperate to spend time with her friends. However, everyone from Olive to Pomeline to Colton to even her brother Kyle were too busy. That all changes when she stumbles across a mystery that unites them as the Detective Club. The story ends by delivering a nice twist that I didn’t see coming and won’t spoil here.

READ: Need more? Catch up with our review of GOTHAM ACADEMY #15!

Anyone who’s read my reviews of the previous two issues in the “Yearbook” arc knows that I was as split as humanly possible on them. I really enjoyed the start in #14, but felt that issue #15 was the nadir of the series so far. I’m happy to say that Gotham Academy #16 is not only a vast improvement on the previous issue but I’d also put it above the fourteenth issue as well. For starters, only having two stories in the book gives both time and space to breathe, as opposed to the rushed nature of having three or four like the previous issues. 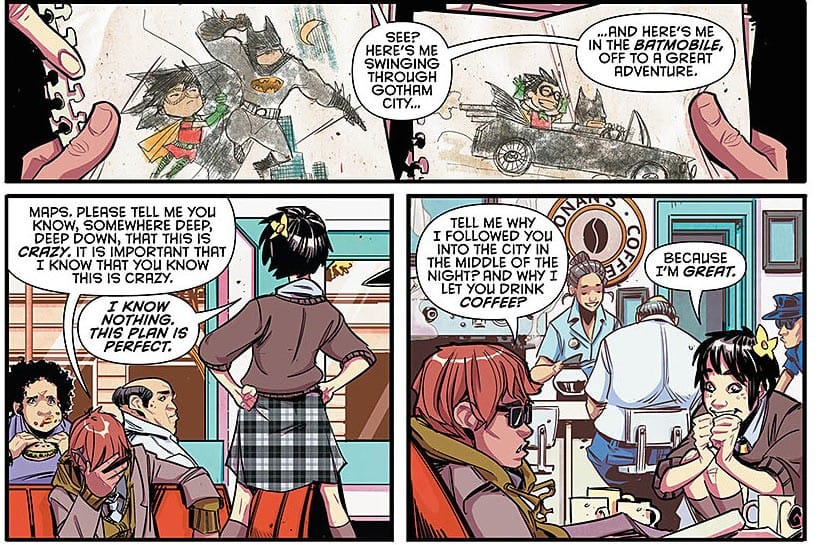 The first story is the better of the two for my money. Tynion really captures the characters in a way few of the other guest writers have been able to, especially Maps- the issue is worth buying to see her hopped up on coffee alone! Also, while others may find it corny, I really enjoyed the ending. Batman’s kind gesture reminded me of the BATMAN: THE ANIMATED SERIES iteration of the character. Artistically, I really enjoyed Wildgoose’s take on the characters. The diner scene was the highlight, especially the background characters. 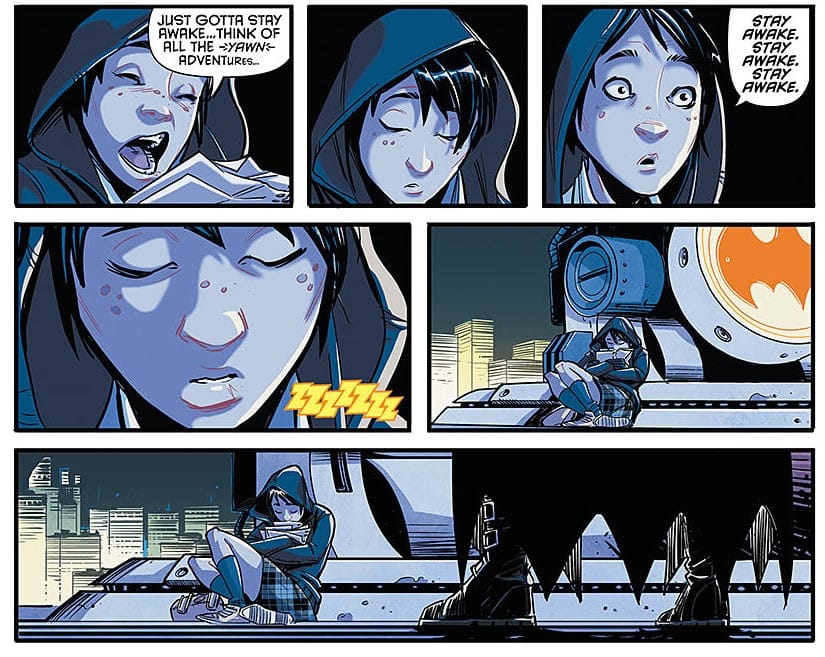 The second story from Ken Niimura, while not quite as good as “Maps’ Day Out” is still enjoyable. He does have a good grasp of the characters, and the aforementioned twist is unpredictable. Without giving away spoilers, it does a great job reaffirming the core values of friendship that pervade the series. “Boring Sundays” is let down a bit by Niimura’s art. While there’s nothing inherently wrong with his Sunday cartoon-inspired style, I don’t think I particularly fits GOTHAM ACADEMY.

GOTHAM ACADEMY #16 is a return to form for the series. It’s still in the “Yearbook” format, but done much more effectively than the previous issue. It gets a definite recommendation from me, and goes a long way in reestablishing the series as one of the best in the industry.