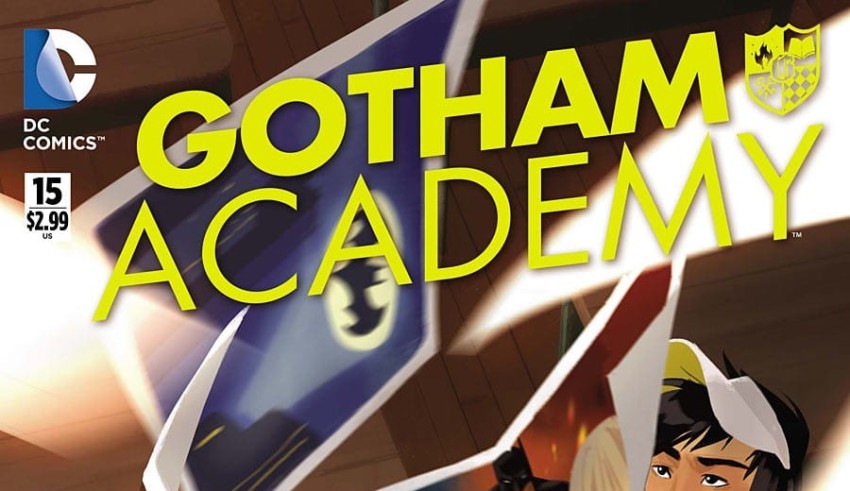 GOTHAM ACADEMY #15 continues the “Yearbook” storyline begun in Issue #14. Continuing the set-up used in that issue, we once again have three anthology stories about various characters told through the framing device of the main cast putting together their own version of the school’s yearbook.

READ: Miss the last issue of GOTHAM ACADEMY? Catch up with our review here. 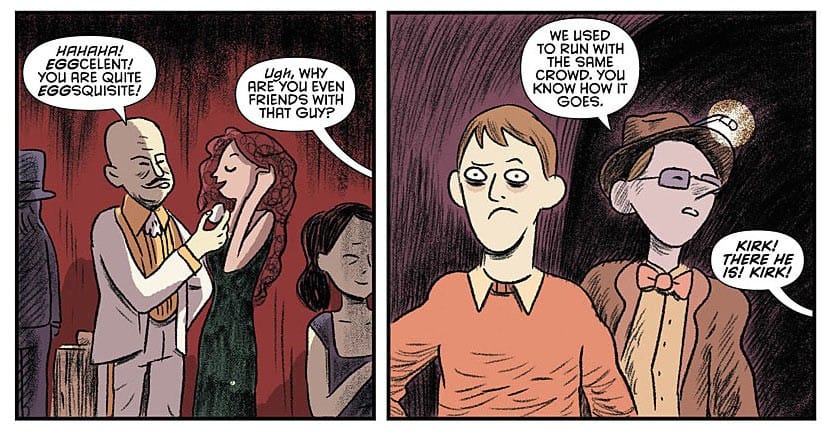 The issue begins with Olive, Maps, and Pomeline trying to think of further stories about faculty to add to the book (following Professor MacPherson’s story from last issue). As if on cue, Colton arrives and begins to tell a story that fits their needs, leading into the first interstitial, “Staff Party,” written and illustrated by Zac Gorman. The short story follows the staff of Gotham Academy, including Hammerhead, Mister Scarlett, Egghead, Kirk Langstrom, and others socializing at a staff party that’s secretly being spied on by Colton and Maps, neither of whom are enthralled by the festivities. 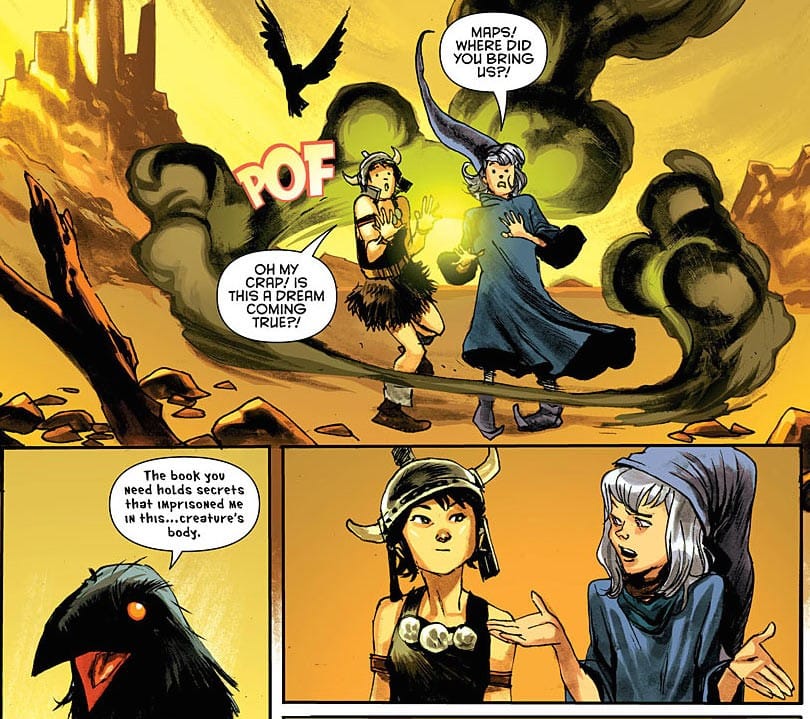 The book’s second (and longest) short begins when Maps begs Olive to tell a story about Hammerhead. Entitled “Serpents & Secrets,” the story, by Eduardo Medeiros and Rafael Albuquerque, begins with Olive and Maps playing the titular D&D-style role-playing game. Seemingly out of the blue, they’re joined by a talking bird who transports them inside the game itself. After fighting their way through a maze to find a hidden book, they’re shocked to encounter (SPOILER) Scarecrow, and they realize their entire sojourn into the game was brought on by his fear toxin. The two are rescued by Hammerhead just in the nick of time, who reveals that he has a very personal attachment to the artifact Crane had come to steal.

The book’s third and final short, “Hammin’ Around” by Mingjue Helen Chen, focuses on a day in the life of Professor MacPherson’s dog Ham, including his interesting relationship with a certain member of the student body.

READ: We love GOTHAM ACADEMY. Find out why here.

I must admit that I was a tad disappointed with GOTHAM ACADEMY #15, mainly because it feels a bit superfluous. It wasn’t a bad comic, but the anthology format that worked so well in the previous issue falls short here. The framing sequences from writer Brenden Fletcher also don’t feel nearly as important to the story as they did last month. Of the three guest-written shorts, neither “Staff Party” nor “Hammin'” had any weight to them, though I did greatly enjoy the joke at the end of the former. “Serpents & Secrets” fairs a bit better, as it has an actual plot to it, and I didn’t see the Scarecrow reveal coming the first time I read it.

While there are issues with the plots of the interstitials, it’s the issue’s characterization that really falls off. In GOTHAM ACADEMY #14, the anthology stories revealed new layers to side characters like MacPherson, something this month’s sorely lacks. The staff party in the first reveals no new information and really seems to only exist to deliver its punchline, and the story that follows Ham is a dialogue-free vignette. While having one of these characterization-free interstitials might have worked, two weighs the book down. The Olive, Maps, and Hammerhead one is better by comparison, but it does nothing but paint the characters in the broadest strokes possible. 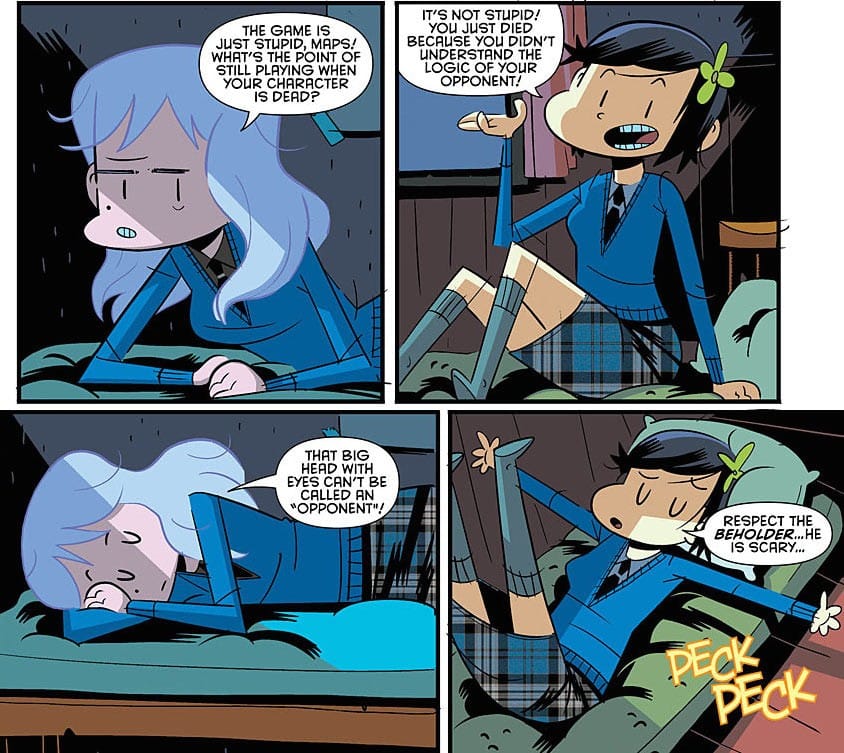 The one area where GOTHAM ACADEMY #15 truly succeeds is in its artwork. Adam Archer continues to improve the framing sequences, to the point where I would like to see him be the book’s artist going forward post-Karl Kerschl. All three of the shorts provide interesting artwork as well. Gorman’s work in “Staff Party” gives the story a comic-strip feel that works well with its content, and the two different sets of pencils on “Serpents & Secrets” do a great job of differentiating the “real” world from Scarecrow’s fear-induced delusion. The winner of the three, though, is “Hammin’,” thanks to the tremendous work of Mingjue Helen Chen. While there’s not much story content, it’s always nice to see her return to GOTHAM ACADEMY after she’s done such a great job on the book and characters in the past.

GOTHAM ACADEMY #15 isn’t bad, but it certainly feels skippable for all except die-hard fans of the series. The anthology format of the “Yearbook” arc loses a bit of its luster, and makes one wish the series’ normal format would return sooner.