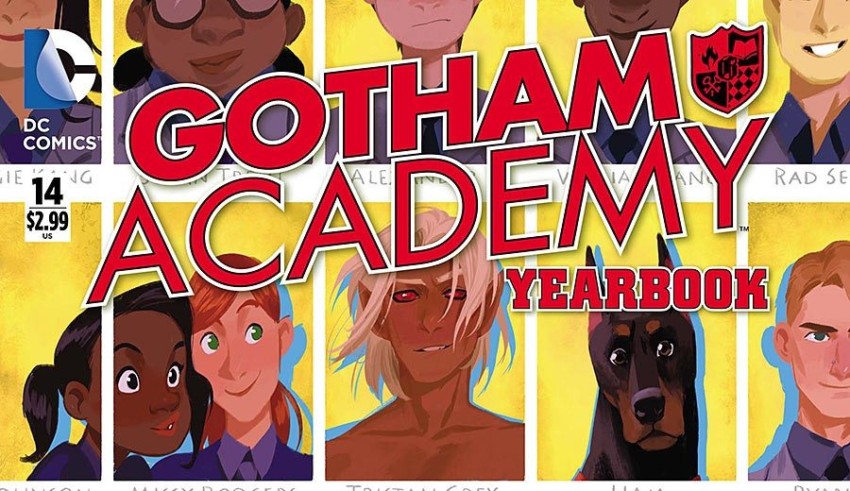 GOTHAM ACADEMY #14 kicks off the title’s “Yearbook” arc. Using a framing story built around Olive and Maps, the creative team of Brenden Fletcher and Adam Archer allows other writers and artists to tell stories set in the past of several GA characters, main and supporting, setting up a unique, anthology-like arc.

The issue begins with Olive encountering a despondent Maps early one morning. Initially, Olive thinks Maps is still mad over her actions in the previous issue when she called the cops on Maps’ Robin-affiliate friend, and she once again apologizes. However, Maps is actually despondent for a different reason altogether: namely, she wasn’t allowed to write for the school’s yearbook. To cheer her up, Olive presents Maps with an early holiday gift, a custom scrapbook for Maps to fill with her memories. The two begin to reminisce, leading into the book’s first vignette.

READ: Catch up on previous issues of GOTHAM ACADEMY here!

“Animal Science 101” follows Colton and Eric during the school’s prank week. The two set out to free a sheep from Professor Langstrom’s lab. They get more than they bargained for when the “sheep” turns out to be a genetically modified ram, who sprouts bat-wings. After chasing the two out of the building, the creature escapes. As if the experience wasn’t bad enough, Langstrom forces the two to wear sheep costumes around campus as punishment.

Olive’s and Maps’ laughter at the thought of their friends in fluffy costumes wakes their floor-mate Pomeline, who joins in on their stroll down memory lane. The three next discuss an encounter Olive and Maps had several months earlier with the school’s glee club, setting up the issue’s second vignette “Queen Glee.”

Olive and Maps are listening to their respective headphones on the school’s quad one day when they notice that the glee club’s leader Dillyn has a group of students following her around in a zombie-like fashion anytime she opens her mouth to sing. Suspicious, the two tail the club to their meeting and learn that Dillyn’s tablet was broadcasting subliminal messages every time she sang. They’re found out and Olive is taken under the club’s control, however, Maps is able to escape and distract all the “zombified students” with a cat video, breaking the control and giving Olive time to smash the tablet.

READ: Big GOTHAM ACADEMY fan? Find out why we love it!

After their discussion of the glee club incident ends, Olive, Pomeline, and Maps begin talking about what kinds of stories the teachers at GA might have to share. They decide to visit Professor Macpherson, who had attended the Academy for one semester while studying in the US thirty years earlier, kicking off the issue’s third vignette; “Scottie Dog.” The story flashes back to 1985. There, we encounter a young Isla Macpherson enjoying a day at the mall with two of her American friends. However, the two ditch her when they want to talk to a boy, saying Isla’s accent will interfere.

A distraught Isla runs off to the restroom crying and encounters a punk-rock girl who goes by Toni. Toni explains that she saw everything in the foodcourt and that she has the ability to hide in people’s “blind-spot.” The two go on to spend the day together, including taking glamor shots together, before going their separate ways when Isla’s other friends return. The scene shifts back to the present day, and the issue ends with an adult Professor Macpherson ruefully look at one of the glamor shots while a newspaper with Toni’s photo, identifying her as an international assassin, sits on the Professor’s desk. 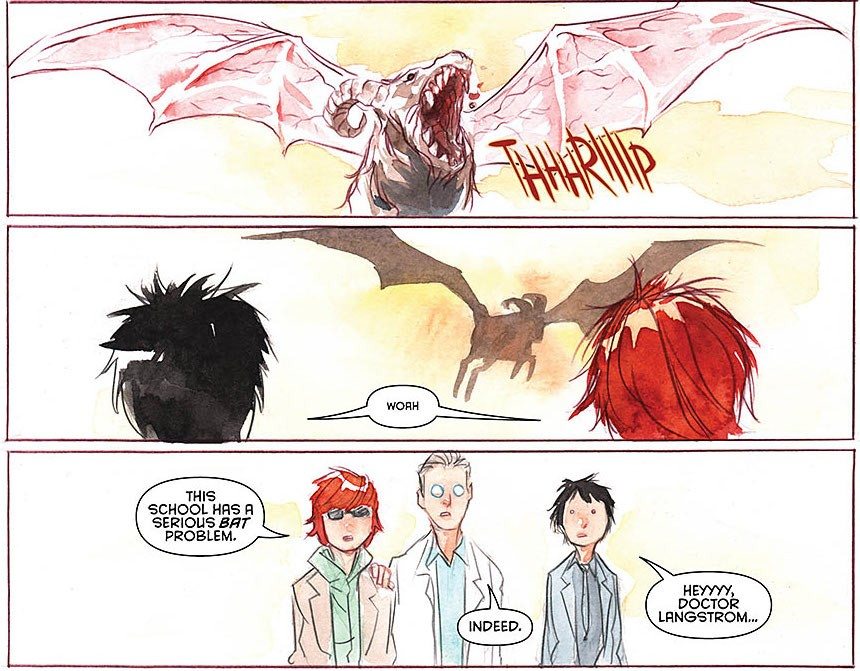 I expressed both in my review of GOTHAM ACADEMY #13 and my “Why I Love: GOTHAM ACADEMY” article that I was a bit nervous about the future of the title. While it easily won my personal Book Of The Year Award for 2015, the departure of co-creator/artist Karl Kerschl and the relatively lackluster ROBIN WAR crossover in issue thirteen had me fearing that perhaps the bloom was finally coming off the rose. Luckily, issue fourteen completely assuages those fears, at least in the short term.

I loved pretty much everything about this issue. The anthology format for the “Yearbook” arc intrigued when it was announced, due to the large amount of side characters and backstory that the series has built up and the fact that a similar format had worked so well in the GOTHAM ACADEMY: ENDGAME one-shot last year. I’m happy to say the book didn’t disappoint in that regard at all. The framing story was also pleasantly surprising. While there wasn’t much content to it, I was very relieved to see Olive and Maps still being BFFs, as I was worried that Olive’s actions in issue thirteen would lead to a rift between the two. I was also much more impressed with Adam Archer’s art than I was last issue. His Olive, Maps, and Pomeline felt much more in character this time around. 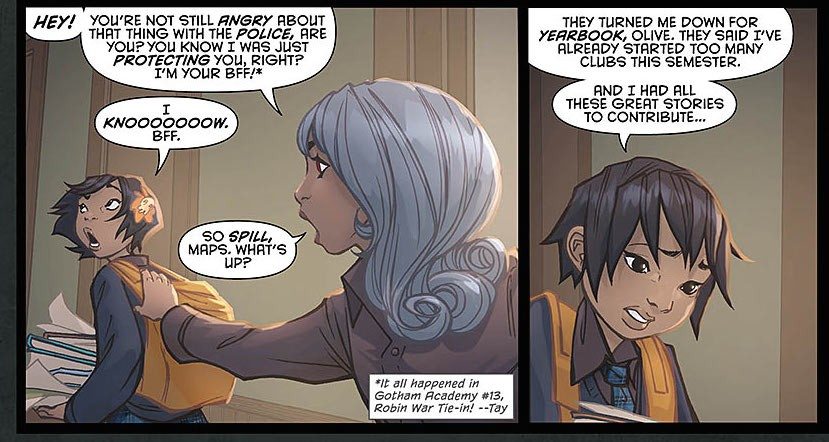 Of the three yearbook vignettes, my favorite was the “Queen Glee” story written and illustrated by Katie Cook. I loved the simplicity of the story, and that it introduced a new recurring character/minor antagonist in Dillyn, the delusional glee club leader. Cook really had a handle on the Olive/Maps friendship and their character dynamics. I loved her art as well, with her chibi-influenced style really working as a “memory” of Olive and Maps. Plus, she had Maps continuously watching/talking about Internet cat-videos, which is about as close to a perfect plot thread as I can imagine.

I enjoyed each of the other two stories, though admittedly not quite as much as the Cook piece. The Colton and Eric-centric  “Animal Science 101” from Derek Fridolfs and Dustin Nguyen featured spectacular art from the latter. However, the plot was a bit sparse and inconsequential, even for a four-page story. “Scottie Dog” from Hope Larson and Kris Mukai featured the opposite problem. Larson’s story of Macpherson as a young girl hit all the right notes. As someone who often found themselves ostracized as a kid, I related to Isla’s feelings of isolation and embarrassment at being made fun of. The introduction of Toni was also really well done, and I hope what we learned at the end of the book means she’ll actually be showing up at some point. That said, Mukai’s art lets the story down a bit. It’s not bad at all as standalone art, but the rounded edge/cartoon style doesn’t particularly fit the story being told. These are just minor grievances however, and don’t really take away from the enjoyment of the issue at all.

GOTHAM ACADEMY #14 is a smashing return to form for the series after the shaky previous issue. It kicks off the anthology-like “Yearbook” arc in a very entertaining way, and definitely leaves me wanting more.