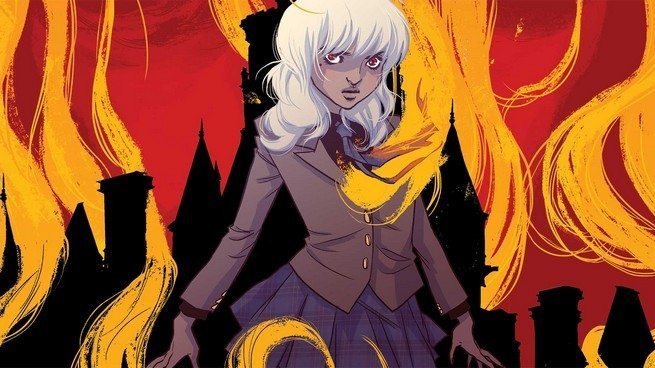 For months, Olive Silverlock has been trying to solve the mystery of whether mother had truly died while under the guise of the villain Calamity, but can she handle the truth when it finally comes out in GOTHAM ACADEMY #12. 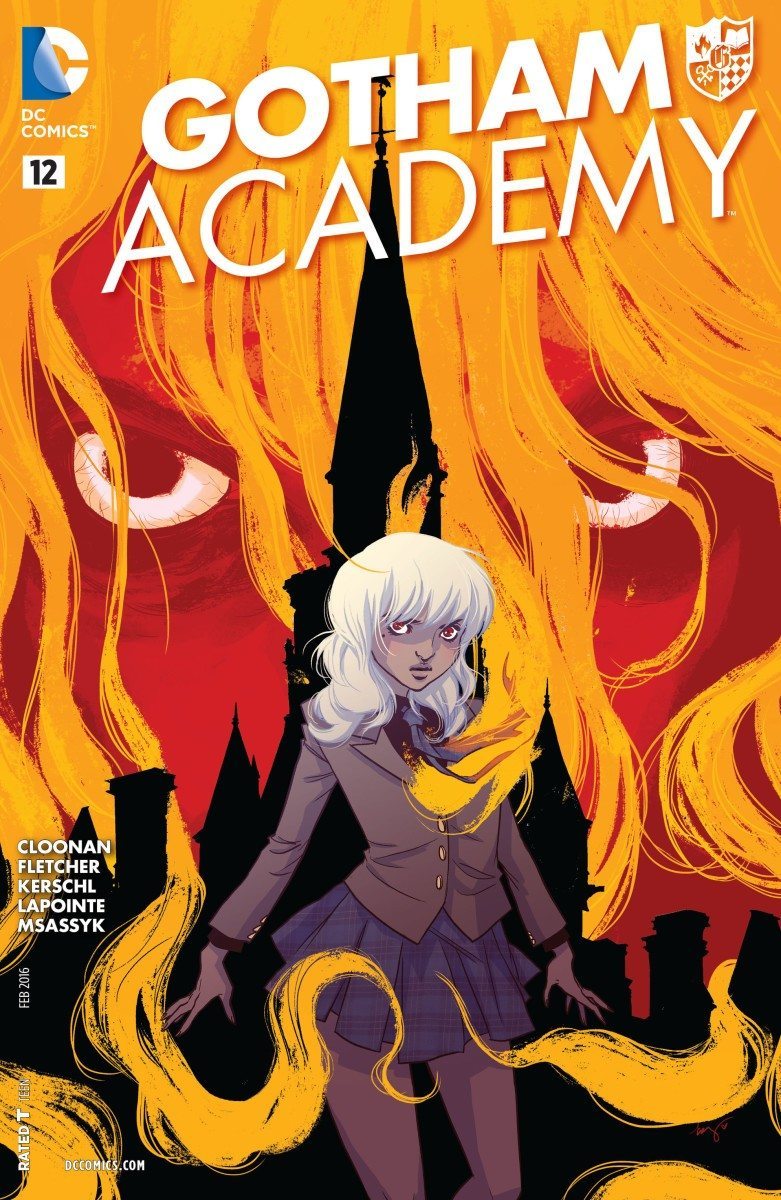 The twelve issue of GOTHAM ACADEMY begins with our cast back at the titular institution following the end of last issue, where the detective club learned that Kyle had been abducted and taken to Arkham Asylum. Olive, Maps, Pomeline, and Colton are gung ho to go on a rescue mission, however they have to deal with the Mizoguchi family’s desire to take Maps (Kyle’s sister) home until her brother is found. They convince Maps’ roommate Katherine (revealed several issues ago to be a child of Clayface, powers included) to disguise herself as Maps. After sending Katherine off with the Mizoguchis, the detective club takes off to the abandoned asylum in a Headmaster Hammer’s car, purloined by Colton for the occasion. 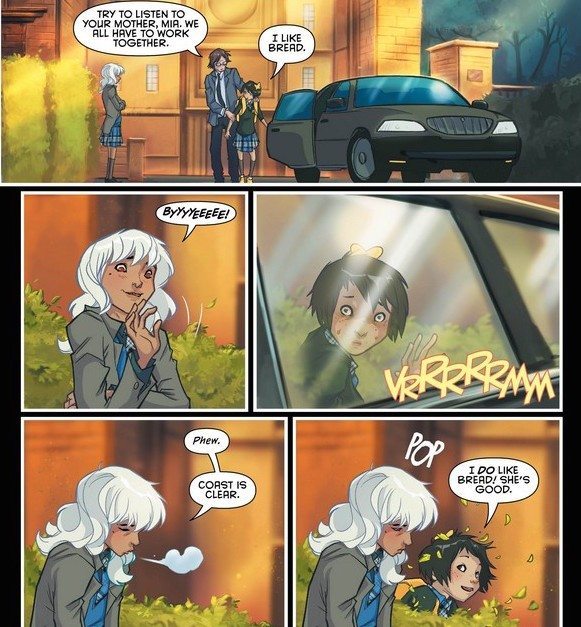 While on the road to Arkham, Pomeline reveals to Olive that while studying the files on Calamity that they’d acquired in the last issue, she learned that the belief amongst psychologists was that Calamity was actually an entity who took control of Silverlock family members generation after generation, and that Olive’s mother Sybil, while under the control of the entity, was responsible for Olive’s father’s death. Olive angrily lashes out at Pomelin and is so shaken by the revelations that Maps asks her to stand guard outside the Asylum, fearing she may be a liability to Kyle’s rescue.

READ: Behind on GOTHAM ACAD!EMY? Catch up here with our review of GOTHAM ACADEMY #11

Maps, Pomeline, and Colton head into the ruins of Arkham, and eventually locate Kyle trapped behind a cell door, perilously hanging over an open chasm. They’re able to use the key discovered last issue to open the cell, and rescue him just before the sliver of ground he’s standing on collapses. Meanwhile, Olive is drawn into the asylum by the sight of her mother in a window. However she discovers that it wasn’t her mother in the window, nor has it been any of the previous times she’s seen her. It was actually her therapist, Dr. Hugo Strange, who’s been trying to manipulate Olive into turning into Calamity. Strange gets his wish and then some, as the book implies that he’s killed by Calamaity (though no body is found, and this is Gotham after all, so I’m sure we’ll see him again). The issue ends with a short epilogue with Olive detailing that after learning the truth, she finally feels whole again.

I feel like I have to start off by saying I liked GOTHAM ACADEMY #12.  From a plot standpoint, the reveal of Hugo Strange having been manipulating events all along (while admittedly a wee bit predictable) worked well and put a lot of the events of the last eleven issues in a new light. However, the second half of the issue feels rushed. The rescue of Kyle and Olive’s major confrontation with Strange take up a grand total of five pages, with only two dedicated to Olive and Strange conversing. The aftermath too is given a short-shrift, which is surprising considering how good this series is at emotional/human moments.  It feels like the creative team packed two issues worth of material into this comic, and considering the upcoming issue #13 is a ROBIN WAR tie-in released just a week after this one, that’s entirely possible. While it doesn’t ruin the book, as I said I still enjoyed it, it does feel like a bit of anti-climax after eleven issues of buildup 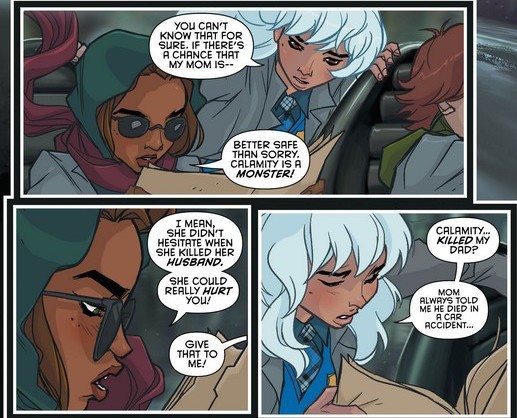 From a characterization standpoint, this was a very Olive heavy issue. As usual, the character is written to angsty perfection. From her shock at learning the true nature of Calamity and how her father died, to her anger at Pomeline for exposing said secrets, to her disbelief at the Hugo Strange reveal, all of Olive’s reactions in this book ring quite true to the character we’ve come to know this past (in real time) year. The other characters don’t fare quite as well, but have their moments. Maps is, as usual, the highlight of any page she appears on. Pomeline and Colton even get some nice character pieces, with the respective tough love revealing of Olive’s secrets and theft of Hammer’s car. Kyle draws the short end of the characterization stick, as he spends the issue as nothing more than a damsel (or should I say Mansel) in distress.

As usual, the art from Karl Kerschl and Serge Lapointe is some of the best in comics. The highlight to me was the design of the crumbling ruins of Arkham Asylum. Like Gotham Academy, Arkham was rendered as intimidatingly scary, almost haunted structure, however in a totally different way. Instead of the Hogwarts-like warmth that the Academy, even in its scariest nooks and crannies, always displays, the Asylum has a foreboding coldness to it that comes across in the pencils and colors.

LISTEN: Interested in picking up something a little different? Check out our podcast discussing the spectacular indie comic BLANKETS!

Sadly, issue twelve marks the end of Kerschl’s run on the title. Anyone whose read any of my reviews of the series knows how big a fan I am of Karl’s work on the series, and how integral I feel it’s been to the book’s success. He will definitely be missed. 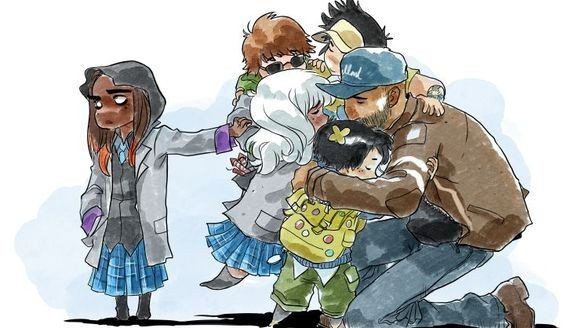 GOTHAM ACADEMY #12 is a solid climax to the story that’s been told over the first year of the series, but one can’t help feeling like its ending was a bit rushed to make room for the upcoming crossover issue, which is a shame as Kerschl’s departure marks it as a real end of the book’s first era. I’d still definitely recommend it fans of the series, but it’s definitely a notch below the books usual standards.