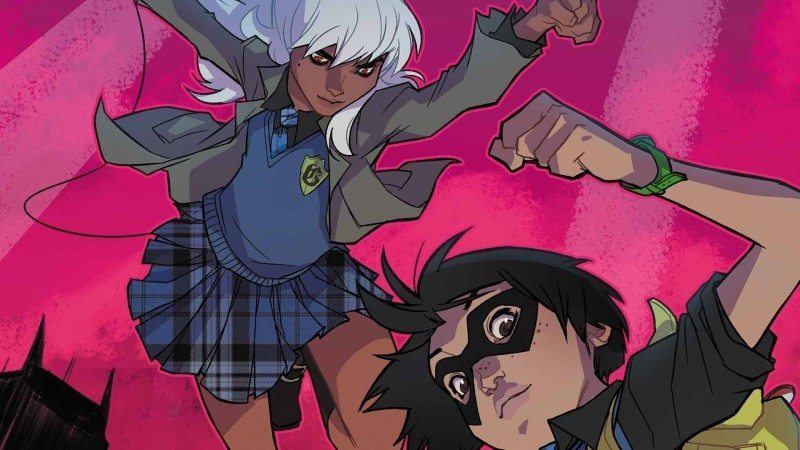 GOTHAM ACADEMY #11 finds Olive Silverlock and the Detective Club continuing to try and solve the mystery of Olive’s mother by going on a dangerous fact-finding mission into Gotham City itself. However, Olive and Maps find more than they bargained for and need the help of a certain Bat-Family guest star.

The eleventh issue of GOTHAM ACADEMY begins with Olive in a therapy session with Dr. Hugo Strange. She confesses to him that she believes she’s seen her supposedly deceased mother Sybil several times recently, matching Gotham papers’ claims of Calamity (Sybil’s villainous persona) returning to the city. She confesses that she plans to use the next day’s field trip to a Gotham Academy tennis match as a cover to find out any information she can about her mother, despite Strange’s protests.

When their bus arrives in Gotham the next day, the Gotham Academy Detective Club pits their plan (intricately drawn out by Maps, as should be expected) into action. Kyle, who is playing in the match, stages a distraction that allows Olive, Maps (whose donned a domino mask, because of course she has), Pomeline, and Colton to sneak away from their group. The latter two head to Pomeline’s mother’s law office to find any information about Sybil’s case, while we follow the former as they sneak into Gotham’s Hall of Records to gather information on Olive’s family history.

After the two rappel down from a skylight, much to Olive’s dismay and Maps’ excitement, they make their way to the records room. Leaving Maps to stand guard, Olive finds a record of Silverlock history dating back over a century, but is horrified to learn that several previous  generations of her family had been criminals who used the name Calamity. Meanwhile, outside the room Maps is startled by the arrival of Red Robin (AKA Tim Drake) and throws her batarang (which she received from Damian Wayne in GOTHAM ACADEMY #7) at him. Thinking her having a “real” batarang signals that she’s a real Robin, Tim lets his guard down and asks what Maps is doing there. After she lets slip that she’s there to find out information about Calamity, Red Robin flashes back to story from years earlier where Batman and the original Robin defeated her, and sent her daughter someplace safe.

Before the conversation can continue, the two notice a flicker of light in the records room, and burst in to find Olive seemingly confronted by Calamity. Despite Olive’s protests, Red Robin fights Calamity off and she disappears, leaving behind a puzzle piece. Maps contacts Pomeline to let her know what’s going on, but instead Pomeline tells her that Maps’ brother Kyle has vanished. Olive and Maps rush back to the tennis match, only to find no sign of Kyle except a mysterious key that, combined with the puzzle piece, accesses Arkham Asylum, ending the issue on a cliffhanger.

Writers Brenden Fletcher and Becky Cloonan have crafted a very interesting plot in GOTHAM ACADEMY #11. While the titular academy is normally a huge part of the book, almost functioning as a character itself, the writers take advantage of the “field trip” motif here to take Olive and Maps from it’s familiar confines and put it them into the larger than life city of Gotham, allowing them to encounter Red Robin. Neither the field trip or meeting feel forced, as finding out more the mystery of Olive Silverlock is a perfectly sensible reason for them to leave the academy, especially give the events of the previous few issues. Red Robin’s appearance also serves an expository purpose, as it allows the creators to insert a flashback of Batman and Robin defeating Calamity, and explaining how and why Bruce Wayne had Olive Silverlock placed in Gotham Academy. As far as the overall plot, the issue continues the slow-burn approach of revealing Olive’s family history in a piecemeal manner, namely by exposing that members of several generations of her family have used the name Calamity. 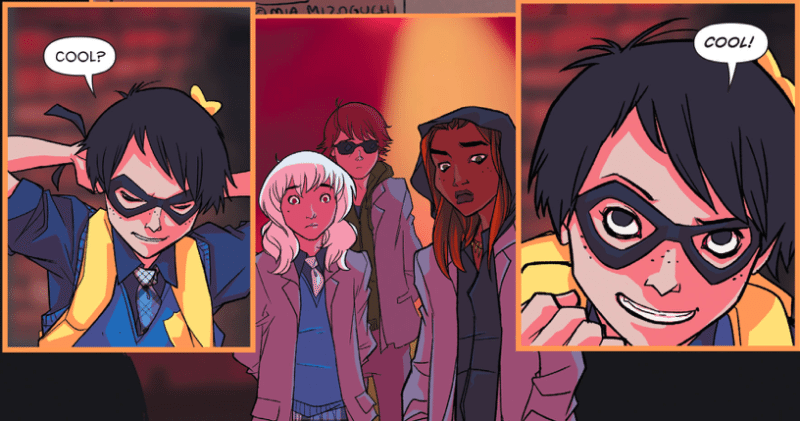 As is typical for GOTHAM ACADEMY, #11 is very strong in it’s characterization. The issue focusses almost exclusively on Olive and Maps, with the former still having trouble processing everything she’s learning about her mother. Her confusion and desperation are obvious in her scenes in the Hall of Records. As usual, offsetting the seriousness of Olive are numerous scene-stealing moments for Maps including her highly detailed map of her plan, her donning of a domino mask, use of the batarang, and especially her fangirling over talking to Red Robin. 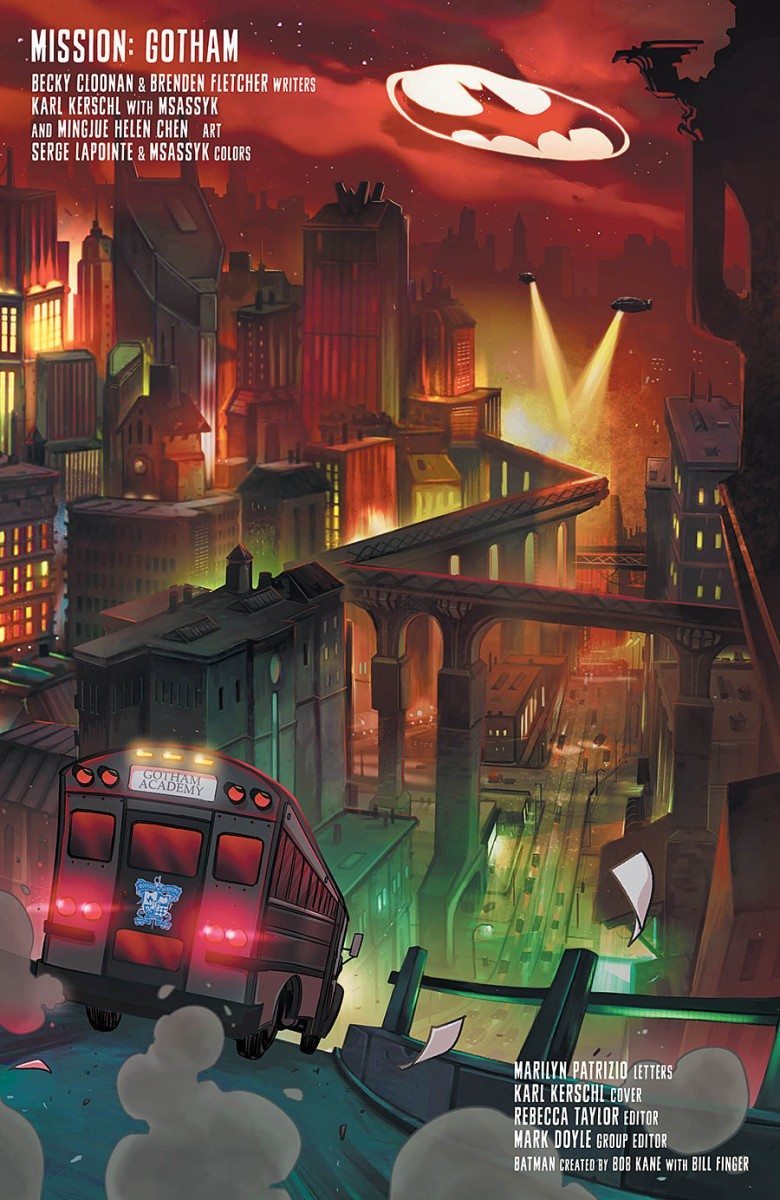 I may sound once again like a broken record here, but the book is one of the best-looking ones on the stands once again this month. Regular artist Karl Kerschl, along with Msassyk, bring his normal outstanding character work on the series into the Gotham setting, crafting a cityscape vaguely reminiscent of BATMAN: THE ANIMATED SERIES. As if Kerschl wasn’t enough, the issues also features several pages by the extraordinary Mingjue Helen Chen. Chen, whose worked as a fill-in artist on earlier issues of GOTHAM ACADEMY, does the flashback story featuring Batman and the original Robin Dick Grayson. Her soft animation style not only looks great in and of itself, but it gives the pages a potent sense of nostalgia which is fitting as they are, after all, a flashback. 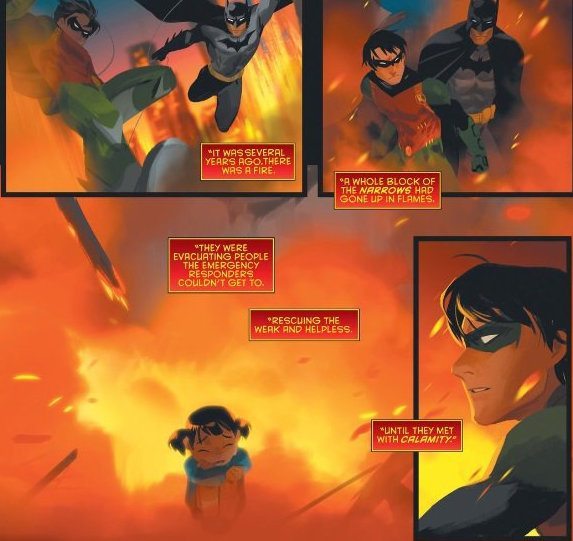 Once again, GOTHAM ACADEMY produces an issue that not only gets my highest recommendation, but is easily my pick for best book of October so far. The plot is integral to the series, the characters are fun to read about, and the art looks great. Honestly, what else can you ask for in a comic book? Do you have any thoughts on GOTHAM ACADEMY #11 or this review? Let us know in the comments below, or on Twitter @Comicsverse.

Check out more from BRIAN here!