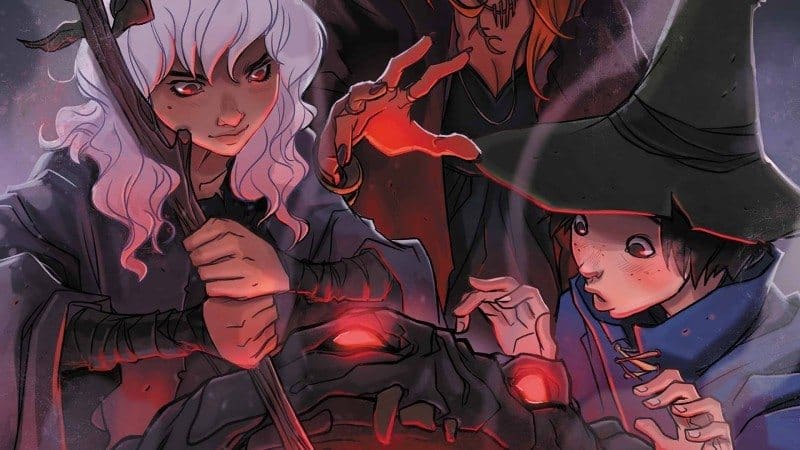 The tenth issue of DC’s GOTHAM ACADEMY finds the Detective Club joining the school’s production of Macbeth to solve one mystery, only to stumble into a completely different one.

GOTHAM ACADEMY #10 opens up right where the ninth issue ended, with Olive and Pomeline fleeing from the school’s burning theater. The two are convinced they saw Olive’s deceased mother Sybil (in her villainous Calamity guise) inside the fire. Pomeline begins to confess to Olive that their parents have a connection, but before she can expound upon it, they are interrupted by the school’s drama teacher Simon Trent (a name, like many in this series, that fans of BATMAN: THE ANIMATED SERIES will recognise). He dramatically declares that he’s lost his whole cast (outside of one understudy named Katherine, whom Trent ignores) and therefore has to shut down his production of the cursed “Scottish Show”, reference to the legends that surround Macbeth. Seeing an opportunity to figure out of the ghost of her mother is truly haunting the theater, Olive volunteers herself and her friends in the club to take over.

The Club, including a very reluctant Colton, join the show and attempt to solve the mystery of what’s ruining the show and if Olive’s mother is truly involved. They continuously encounter dead ends, until a key piece of evidence leads them to Katherine, who shares a very interesting relationship with a Bat-villain that I won’t spoil for you here. Said villain has vendetta with Trent, and the book climaxes with the two trading Shakespeare-influenced barbs. The distraction allows the detective club to cleverly defeat the villain, however before anyone has a chance to celebrate news comes across that the GCPD believes that Calamity is back on the loose, leaving Olive even more confused.

Need to catch up? Read our review of GOTHAM ACADEMY #9 here.

Since GOTHAM ACADEMY returned from the “Convergence” break with its seventh issue, the book has made a habit of telling episodic self-contained stories that still further the book’s overall narrative, and # 10 continues that trend. Writers Cloonan and Fletcher craft another interesting early Buffy/Scooby Doo style one-off mystery, this time using a litany of Shakespeare references and dialogue to tell a “Cursed Macbeth” story. The overall story of the series is still served through the ongoing mystery of Olive’s mother Sybil, and the introduction of yet another established Bat-character to the school’s faculty. The only issue I had with the issue’s plot had to do with Katherine’s relationship to the its surprise villain. It seems to be established one way when it’s introduced, but by the end of the issue it seems to be something completely different.

From a characterization standpoint, the issue delivers some more great character moments for (almost) every member of the main cast. Olive continues to try and suppress her burgeoning powers and solve the mystery of her mother, all the while attempting to maintain her relationships with her friends and others at Gotham Academy. Maps, who continues to be my favorite character in comics, has a great emotional moment with Olive then immediately shifts back into typical “Maps Mode” once mystery beckons. Pomeline and Colton both get smaller moments to shine, and the formers’ apparent connection to Olive’s mom and the latter’s continually developing science skills keep them very relevant to the plot. Unfortunately, Kyle once again gets the short-shift, a trend I hope is reversed soon.

Artistically, artist Karl Kerschl and colorist Serge Lapointe deliver another good looking issue. Of particular note are the pages where Olive, Pomeline, and Maps act as the Three Witches from Macbeth. The only slight criticism I would offer is to a particularly striking cut that occurs in the middle of the book and doesn’t make much visual or narrative sense.

GOTHAM ACADEMY #10, while not quite reaching the level of #9, continues the book’s streak of really strong single issue stories while still propelling the book’s overall arc forward. It’s, once again, a must read book.

Check out more from BRIAN!