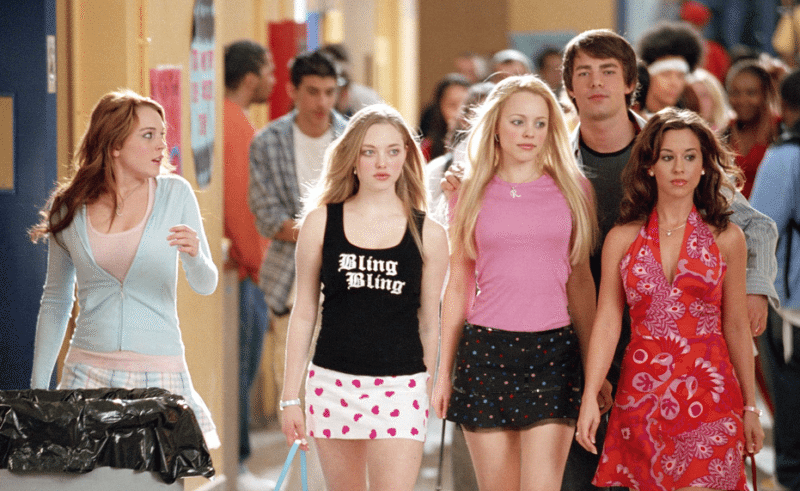 This article is part of ComicVerse’s back2skool series! Check out the rest of the articles here.

WARNING: MAJOR SPOILERS FOR FERRIS BUELLER’S DAY OFF, MEAN GIRLS, AND EASY A

It’s back-to-school time, and that means one thing: reminiscing about classic (or recent) school-themed films! From FERRIS BUELLER’S DAY OFF to MEAN GIRLS, school films can be anything from cringeworthy, to tearjerking, to maybe even self-validating, but what makes a good school movie? What sets one clique-based school film apart from the next? When we look at some of the more iconic school films, we can come up with two main categories: coming of age stories and satirical social commentaries. Some of the movies that will be mentioned in this article can be arguably good or bad overall, but this analysis will just go over the films’ best qualities.

There’s nothing like good character development to drive a story forward. Whether a film is set in middle school, high school, or college, it’s an ideal setting for transforming a character. They’re in a place of learning, after all! Films like FERRIS BUELLER’S DAY OFF highlight unique characters and how they influence each other at a pivotal time in their lives. Even though the plot is all about avoiding school, the story is still related enough to high school to call it a “school movie.” We see the comedic, fourth-wall breaking, Ferris Bueller elaborately skipping class, and somehow being both a bad and good influence on those around him.

On its own, the story doesn’t sound like a big deal, but Bueller’s raw charisma and relationships define the events in the film. For Ferris, skipping school doesn’t stop at just feigning illness and staying home. It means living it up while no one is looking. With the help of his best friend Cameron, he breaks his girlfriend, Sloane Peterson, out of school by feigning a death in her family. Then, he convinces Cameron to let him borrow Cameron’s dad’s prized 1961 Ferrari 250 GT California Spyder and take them all out for a ride in the city.

Throughout the film, the audience is left in awe of Ferris’ ability to take and manage crazy risks. He gets a table at a fancy restaurant by faking a series of phone calls, confirming that he’s the “Sausage King of Chicago,” and just narrowly escapes being seen by his father while dancing on a parade float. However, the two characters that actually grow the most in this film are Cameron and Jeannie, Ferris’ sister. Long story short, Ferris gets away with everything he does that day, but Cameron and Jeannie don’t. Initially, Ferris comes off as just a bad influence on Cameron. He pesters him to join him in his crazy adventure, and pushes him to do things are way out of his comfort zone. However, he does all that for Cameron’s sake, since, in his opinion, “Cameron is so tight, that if you stuck a lump of coal up his ass, in two weeks you’d have a diamond.”

LOOK: See how social messages might overpower narrative in some TV series!

Cameron reveals later that he truly lives in fear of his father. Pushed to the breaking point, Cameron realizes that everything he does is under his father’s control, and accidentally destroys the Ferrari. Feeling incredibly guilty, Ferris offers to take the blame for Cameron. But, transformed by their wonderful and stressful adventure, Cameron decides it’s time for him to confront his father. He steps out of his role as the dutiful son and asserts himself as an individual, marking a significant step into adulthood. Even though Cameron’s self-discovery is a side-story to the main plot, it makes the experience more real, giving weight to all characters involved.

Then we have jealous Jeannie, furious that her brother can get away with everything. Initially, she tries to mimic him out of spite, skipping school as well. She also tries to sabotage her brother’s spontaneous outing by trying to prove to their parents he’s feigning sickness. However, when she discovers an obsessive school administrator, Mr. Rooney, trying to catch her brother, things start to change perspective for her. She tries to report a break-in but is arrested for “false reporting.” Down at the station, she meets a delinquent who also tells her not to obsess over her brother. She contemplates this (albeit while making out with the delinquent). On the way home, she makes one final attempt to catch her brother, but has a change of heart when she sees Mr. Rooney doing the same thing yet again. Instead of giving up her brother to this obsessive teacher, hell bent on catching her brother, she takes Rooney’s wallet as proof of his break-in to blackmail him. She defends her brother at no cost, showing that she took the delinquent’s advice to heart.

READ: Take a look at Brianna Best’s article on THE CURSED CHILD here!

Without these side stories, FERRIS BUELLER’S DAY OFF wouldn’t have nearly been as interesting as it is. How the secondary characters are motivated defines the story and gives weight to its reality as a tale of growing up. Even though Ferris’ luck is practically inconceivable, his relationships are not. Most of us have a Cameron in our lives—or maybe we are the Cameron—and what sibling can’t relate to being compared or feeling jealous in some way? Characters, much like people in real life, can really enhance an experience, especially when it comes the relatable time of leaving childhood behind and becoming an adult.

I love a good satire, don’t you? Movies like EASY A and MEAN GIRLS would come quite close to being satirical masterpieces if high school weren’t so ridiculous as it is. Films that obviously highlight and critique a hilariously terrible aspect of high school are great fun to watch. MEAN GIRLS features clique culture and the ridiculous social terrain students have to navigate, and EASY A is all about the sexual double standard in high school. (Guys’ reputations depend on having straight sex, and girls’ reputations depend on not having sex, so how exactly does that work?)

First, let’s look at the classic, the iconic MEAN GIRLS. This film is also sort of character driven, in the sense that the main character, Cady Heron, is pretty unique. She’s set up as a well-traveled, home-schooled girl with no understanding of the social “system” whatsoever. The way public school life corrupts her unique individuality is a pretty obvious commentary on the frivolous but crushing construct of social groups. Cady is used by “the best people she’ll ever meet,” a.k.a Janis and Damian, to take revenge on Regina George and the “Plastics” for ruining Janis’ reputation and also for her general meanness. Cady is also hurt by Regina, who jealously takes back her ex-boyfriend just because Cady is interested in him. In the end, the film drives home the point that being overly invested in social groups and social hierarchy is ridiculous, but a dangerous reality of high school. Janis hates Cady for “becoming” plastic, the Plastics hate Cady for manipulating and lying to them, her parents are disappointed in her for losing her sense of self, and everyone blames her for the infamous “Burn Book” full of cruel, hateful messages. Luckily, Cady is able to reconcile with everyone after growing out of that tunnel-view of the social hierarchy.

EASY A is a little more hard-hitting than MEAN GIRLS. In this modern twist on THE SCARLET LETTER, Olive Penderghast lives through some of the worst scrutiny that a high school girl can face. Starting with a white lie about losing her virginity, soon Olive finds herself in a sticky web of sexual lies. She pretends to have sex with her gay friend, Brendon, so that he won’t be bullied anymore. Initially, she doesn’t think too much of her altruism, but she finds that her lies have put her “on the map” at her high school. Because she “had sex” with Brendon, rumors about her start flying around, she has a fight with her best friend, and then decides to embrace her image as the “school skank.” She stitches a red “A” onto her clothing and continues to pretend to have sex with the “losers” so their reputations improve. However, when the leader of the Christian group’s boyfriend gets chlamydia from an affair with a teacher, Olive is blamed and takes the fault so their teacher won’t get in trouble. Olive’s struggles highlight the unfair sexual double standards in high schools. Sex defines your reputation. This movie has audiences question the sanctity of that mentality. Olive, who never had sex with anyone, and who doesn’t think much of sex, is subject to a torrent of scrutiny.

At this point, viewers can either admire Olive for her selflessness or think her stupid for lying so much. Either way, Olive clearly regrets it when the Christian group starts to bully her to push her out of school, and a boy Anson wants to actually have sex with her after paying her. This shows how harmful this obsession over sex can be. Whether its glorified or demonized, the whole school thinks too much of a it. When Olive tries to get everyone to tell the truth, they all refuse, reveling in their newfound popularity, and they’re afraid to lose that. In the end, she’s able to reveal the truth to the entire school, apologize to her best friend, and restore her reputation. The movie is an emotional roller coaster, clearly showing the anxiety people have about sex. On one hand, there are those who glorify it and stake their reputations on having it, and on the other, there are those that demonize it and those who have it. This film overall is a great commentary on a harmful societal double standard. It drives home the point that in the end, like Olive says, it’s really nobody’s business.

READ: Fan of VOLTRON LEGENDARY DEFENDER? See what its Season 2 needs to do to make it even better!

In terms of satire, both these films are great at slightly exaggerating their respective aspects of the high school experience. MEAN GIRLS takes the “clique hierarchy” to hilarious proportions. In real life, most of the disdain for the “popular girls” doesn’t end up with a school-wide cat fight, or with someone getting hit by a bus. However, the average student’s perception of a similar social conflict might feel just as intense. Satire works in these kinds of films, not only because it scrutinizes a harmful aspect of high school life, but also it captures on screen how it feels individually. A student likely will never have to cover for an illicit teacher-student affair, but rumors about who had sex with whom definitely fly. That might feel just as distressing as Olive’s life looks in EASY A.

So what will be on the test?

The best stories are the ones that capitalize on their setting without obsessing over it. Meaning, writers are able to take into account the individual age group, maturity, motivations and concerns of the characters they’re writing about. In each of the above films, the characters come into conflict with others’ ideals and concerns, and end up asserting their opinions, which drives the stories forward. However, there’s also a simpler reason why certain school movies have become so iconic: the vast majority of people can relate to them. Whether that’s a middle schooler anticipating high school, a high school student laughing at the film’s accuracy, or a college student reminiscing about the past, most people are drawn to what they know. This combination of social awareness, lessons in maturity, and familiarity is a perfect recipe for classics that last through time! I swear, make a MEAN GIRLS quote. Someone will get it.