One of Valiant Entertainment’s most high-profile series launching in 2016 is HARBINGER RENEGADES. This will be the return of the Harbinger team for the first time since the cancellation of the previous HARBINGER series in July of 2014. We’ve seen some of the characters in books like FAITH, but they’re getting the spotlight once again with an ongoing series from writer Rafer Roberts and artist Darick Robertson. Roberts, writer of Valiant series A&A: THE ADVENTURES OF ARCHER AND ARMSTRONG and creator of series like PLASTIC FARM and NIGHTMARE THE RAT, took the time to give us a peek at the series and his other works in a ComicsVerse exclusive interview! 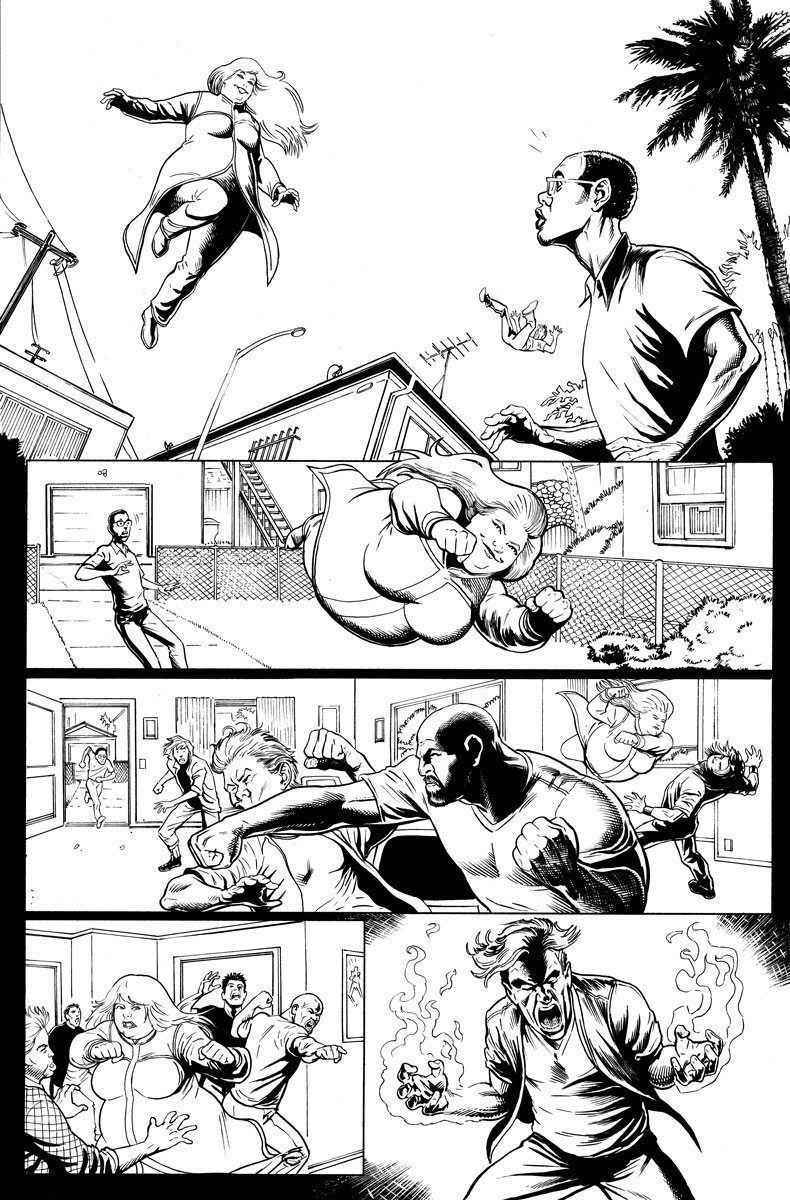 ComicsVerse: Rafer, you’re a writer and artist with a background in indie, self-published comics. How different is your creative process working on PLASTIC FARM in comparison to A&A: THE ADVENTURES OF ARCHER AND ARMSTRONG or HARBINGER RENEGADES?

RAFER ROBERTS: Other than having editors, writing for Valiant isn’t much different than writing for my indie and creator-owned stuff.

Everything starts with an idea, and mine all come from the same blob of Swiss cheese that I call a brain. I pretty much take a bunch of disjointed thoughts and concepts, various scenes that I think would be cool, and build a story around that. For example, with the A&A: THE ADVENTURES OF ARCHER & ARMSTRONG story arc “NEXT STOP CLOWNTOWN”, I had been watching a crappy conspiracy theory documentary about Soviet experiments in human cloning, and my brain immediately went to Russian circuses and having Archer and Armstrong visit one.

But as far as writing scripts goes, or coming up with the strange adventures to send characters on, there’s no real difference. 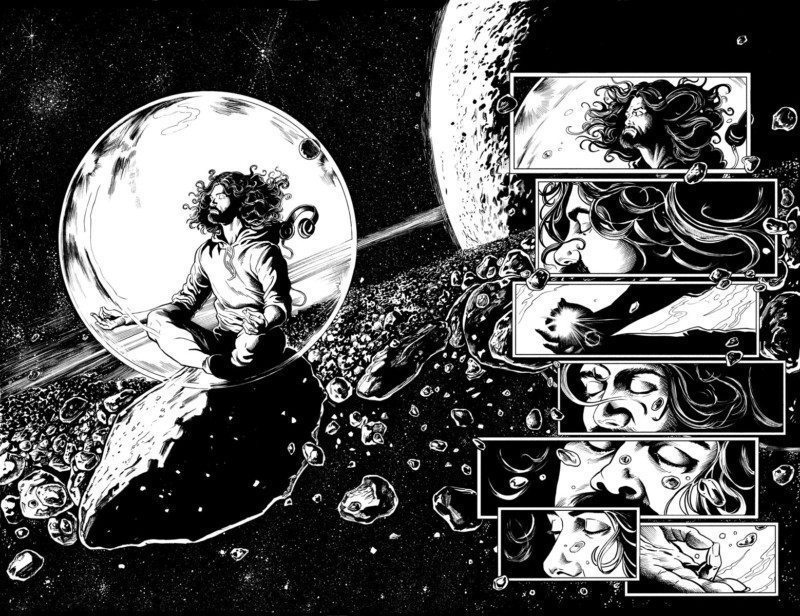 CV: Valiant is currently marketing HARBINGER RENEGADES as the must-read Valiant book of Fall 2016. What should new readers and old fans of the team look forward to?

RR: Current readers will be excited to learn that everyone who isn’t dead is coming back. We’ll also be introducing a few new characters as well. It’s going to be a good jumping-on point for new readers. We’re making every effort to make this series accessible to those who may not have read a HARBINGER series before, while remaining true to the spirit of the earlier series.

We’re going to explore what it takes to go out and fight the good fight, while knowing that you can never truly defeat all the evil in the world. More than that, these kids have already tried to save the world and failed hard. Even worse, this led to the death of a friend, and left the world in a much worse condition. I think that sort of experience would leave someone unwilling to go out and continue to fight, but then, that’s what makes the Renegades special.

Kris, the non-powered member of the group, is guilt-ridden following the events of the first series. She’s living with her girlfriend, Tamara, and trying to put some sort of life together. When Faith visits Kris to ask for help, Tamara slams the door in her face. Kris’ journey back into heroism, as her relationship with Tamara, is one of the most interesting parts of the comic.

Then there’s Faith, who is still the best of us all. She is optimistic, willing to see the good in everyone, and the only Renegade who stayed in the superhero business. But she is tired and could use some help from her old teammates.

Torque has been using his superpowers to make himself a reality TV star. He’s very interesting to me, beyond being a total douche. I feel like he’s becoming aware of how shallow his life is, but he would never admit that.

Peter is the most powerful superhero on Earth, as well as a pill-popping junkie on the run from his own guilt. He’s been trying to fix himself and get clean. It’s going to be fun exploring just how successful his attempts have been.

The Renegades will come together to fight a group of anti-establishment activists who are killing kids in a misguided attempt to create their own super-powered allies. This group is funded by a new villain who has the ability to accurately calculate future events and act accordingly. They want to save the world, even if it means killing a lot of innocent people. 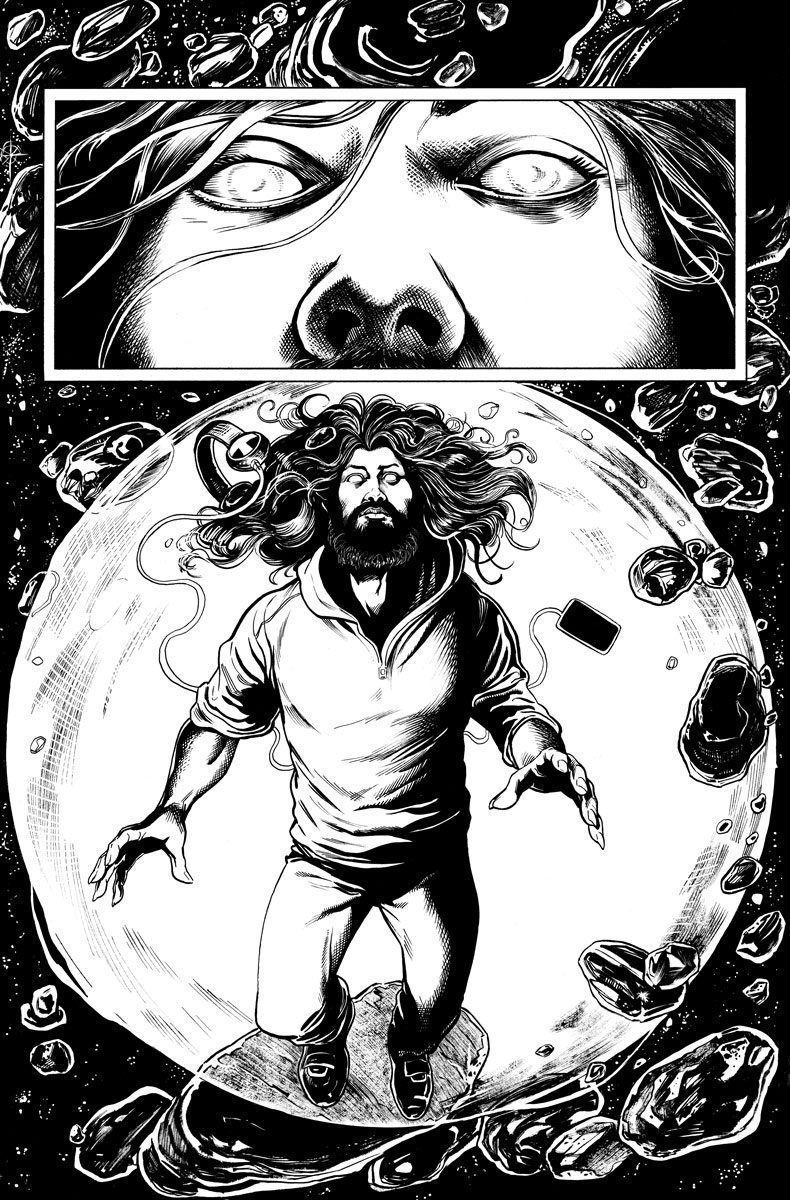 CV: With Valiant, you’ve had the opportunity to work with amazing artists like David LaFuente, Mike Norton, and Darick Robertson. What’s been your favorite collaboration at Valiant so far?

RR: One thing that David, Mike, and Darick have in common is that they all have very individual styles. You can look at each of their works and say, “That’s a Darick Robertson” or “That’s a David LaFuente”. There are a lot of generic comic artists out there. While their art is good, it isn’t anything special or unique. David, Mike, and Darick rise above that and create art that is wholly their own.

David’s style is well on the cartoony side of the spectrum. But, the cartoony nature of his art sucks you in and helps deliver unexpected emotional punches when you least expect it. His art really worked well on the “IN THE BAG” story arc of A&A: THE ADVENTURES OF ARCHER & ARMSTRONG. It’s happy and weird on the surface, but emotionally rewarding once you really get into it. Plus, jeez, what he did with his page layouts and designs was jaw-droppingly awesome.

Mike is an amazing artist and wonderful storyteller. His people are expressive, his lines are clean, and his layouts are dynamic and clear. He has a gift for drawing everyday environments and bombastic superhero action scenes, and making both feel real. His first issue of A&A: THE ADVENTURES OF ARCHER & ARMSTRONG was illustrating the story of two superheroes who spend most of the story pretending to be ordinary people on a regular date in a real-world environment. Since then, he’s drawn a ton of circus freaks, bears in lab coats, and evil communist scientists—all with the same quality and attention to emotion and detail.

Darick has this unique line work that, I think, captures a textured real-world feel, without ever venturing too far into realism. His ability to create whacked-out environments that feel real, or to draw regular environments with a breath of life is amazing. And I don’t know of too many working artists who utilizes character posture in order to convey emotion and personality as well as Darick. He’s already turned in a few sequences that have given me chills just by looking at them.

But perhaps the best thing about these three is their desire to collaborate and bring something of their own to the table. Every single creator on these books—and I’m including the inkers and colorists and letterers and editors in this—brought their A-game and made (and continue to make) some damn good comics.

READ: Want more ARCHER AND ARMSTRONG? Check out our review of the A&A audio drama!

RR: I’ve told this story a few times, but when Justin Jordan and I were hired to do some backup stories for Valiant’s 25th issue celebrations, I hadn’t read any of the current Valiant books. I made a point to sit down and read EVERYTHING and, to my joyful surprise, I discovered that I really enjoyed them. I actually kicked myself for not having been reading them already.

I grew up reading mostly Marvel, and by that I mean I read a crap ton of Marvel. I’d pretty much read everything I could get my hands on and, when I started working in a comic shop in high school, I even started reading a ton of DC. I was also reading a lot of self-published and indie books, and as my tastes in modern superheroes waned, those became the majority of what I read. I even talked a lot of trash about superheroes like a true snob.

CV: A&A: THE ADVENTURES OF ARCHER AND ARMSTRONG is currently one of my top five favorite comics of 2016. What do you enjoy most about writing the characters and what do you hope to explore in the future?

RR: For me, first and foremost, it’s exploring their strange and unique relationship. On one side, you’ve got Armstrong, a 10,000-year-old drunken, immortal warrior-poet. And on the other side, you’ve got Archer, a superhuman ex-fundamentalist teenage martial arts expert who was trained since birth to assassinate Armstrong. Getting the opportunity to play with two characters who are complete opposites, who get on each other’s nerves, but who also genuinely care for each other, is a writer’s dream. It’s Neil Simon’s ODD COUPLE if Oscar had superhuman strength and Felix also knew Kung-Fu.

But, my favorite part has been getting emails with art in them. I might be the biggest fan of this comic, and getting to see the pencils, inks, colors, and letters hit my inbox feels like Christmas morning every time. 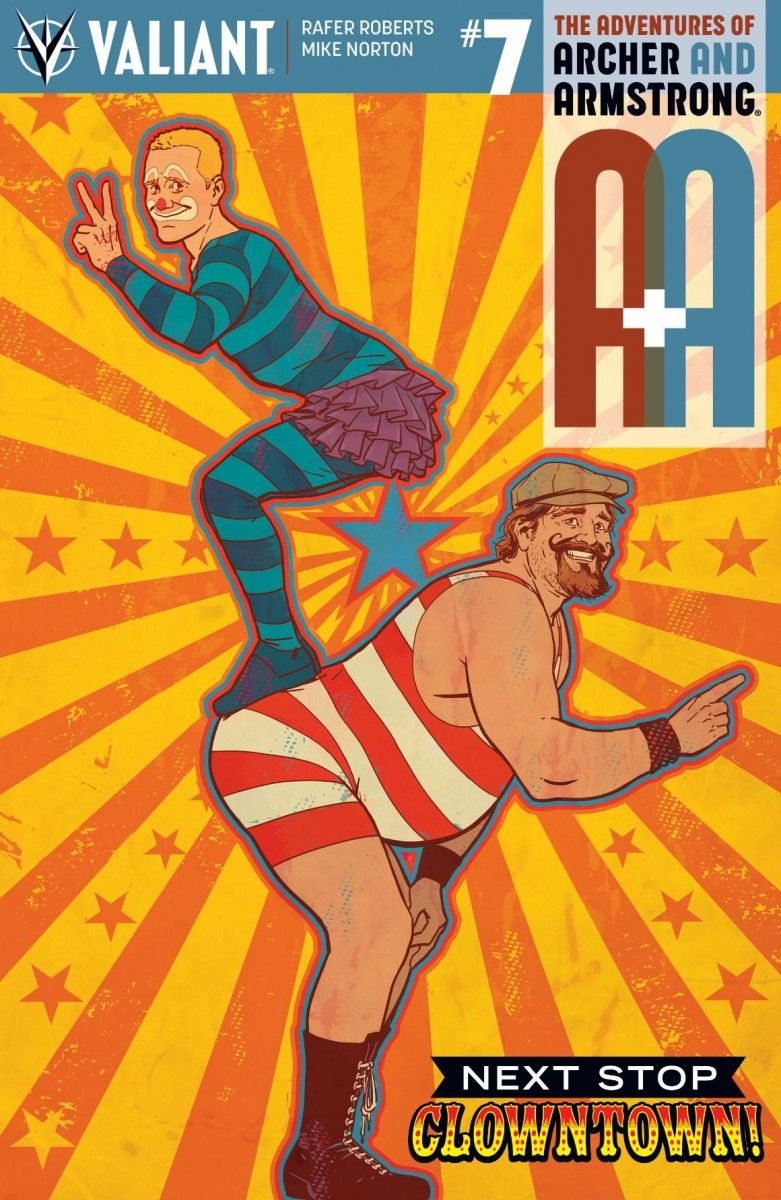 CV: While you are currently the writer on two Valiant titles, you are the writer/artist for your creative owned books as well. Are you currently working on new PLASTIC FARM and/or NIGHTMARE THE RAT stories or something brand new in your spare time?

RR: PLASTIC FARM is on a bit of a hiatus as I work on these “paying jobs with deadlines.” Part of issue #26 is already complete and I hope to get back to it soon. My plan is to finish NIGHTMARE THE RAT first, as that is closer to the finish-line. I’ve got a few strips finished and queued up in a few different places, and maybe 10 more strips-worth of comics to do before it’s all said and done.

It is tough. I still have a day job and a majority of my “free time” is spent on deadline work. That said, the more people support the deadline work, the more likely it will be for me to get my self-published stuff back into the mix.

READ: Interested in the HARBINGERS? Check out our feminist analysis of FAITH!

CV: During my research for the interview, I came across your Patreon. For those interested in supporting you outside of the comic shop, this would be the place to go. What can readers see from you on Patreon?

RR: I’ve been posting a bit of my art process, showing how I go from rough sketch to finished illustration and the stages in between. I also talk truthfully about any struggles I had while completing the piece, and what I did to work through them. I’ve shown off script samples from creator-owned stuff, and I’ll be showing exclusive previews of those creator-owned books once we get closer to publication. Once we get enough Patrons, I’ll do Skype chats and exclusive meet-and-greets. Plus, Patrons can get original art and sketches.

Reader, if that doesn’t get you excited for the upcoming HARBINGER RENEGADES, I don’t know what will. Issue #1 of the series will be on Comixology and at your local comic shop on November 30th. In the meantime, go check out Roberts’ other Valiant ongoing, A&A: THE ADVENTURES OF ARCHER AND ARMSTRONG! The trade for the first four issues of the series is out now and it is one of the year’s best new titles. Basically, go buy all of Rafer Roberts’ comics and support his Patreon because he is doing great work!