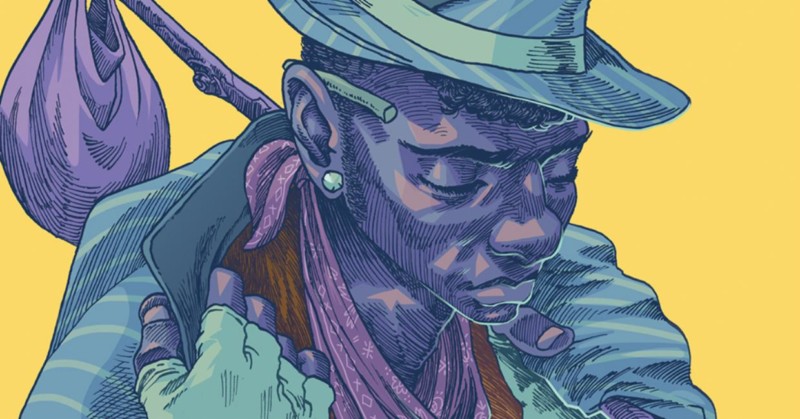 In this alternate reality, God is a material being that embodies cute little monsters that follow humans around. But like all materials in a capitalist society, God inevitably turned into commodities. In this world, people buy and sell their god’s services: from haircuts to delivering letters to photocopying. The analogy is clear — technology is our god, whether in the form of adorable monsters or Apple devices. And like how most everyone nowadays has a smartphone, everyone in GODSHAPER #1 has a god. That is, except for Ennay. Our protagonist is a societal outcast because he doesn’t have a god. Ennay’s godlessness grants him the power to shape gods’ flesh. Ennay’s talent is reviled but needed by the fashion-obsessed community. Gods need to be fashionable, right? 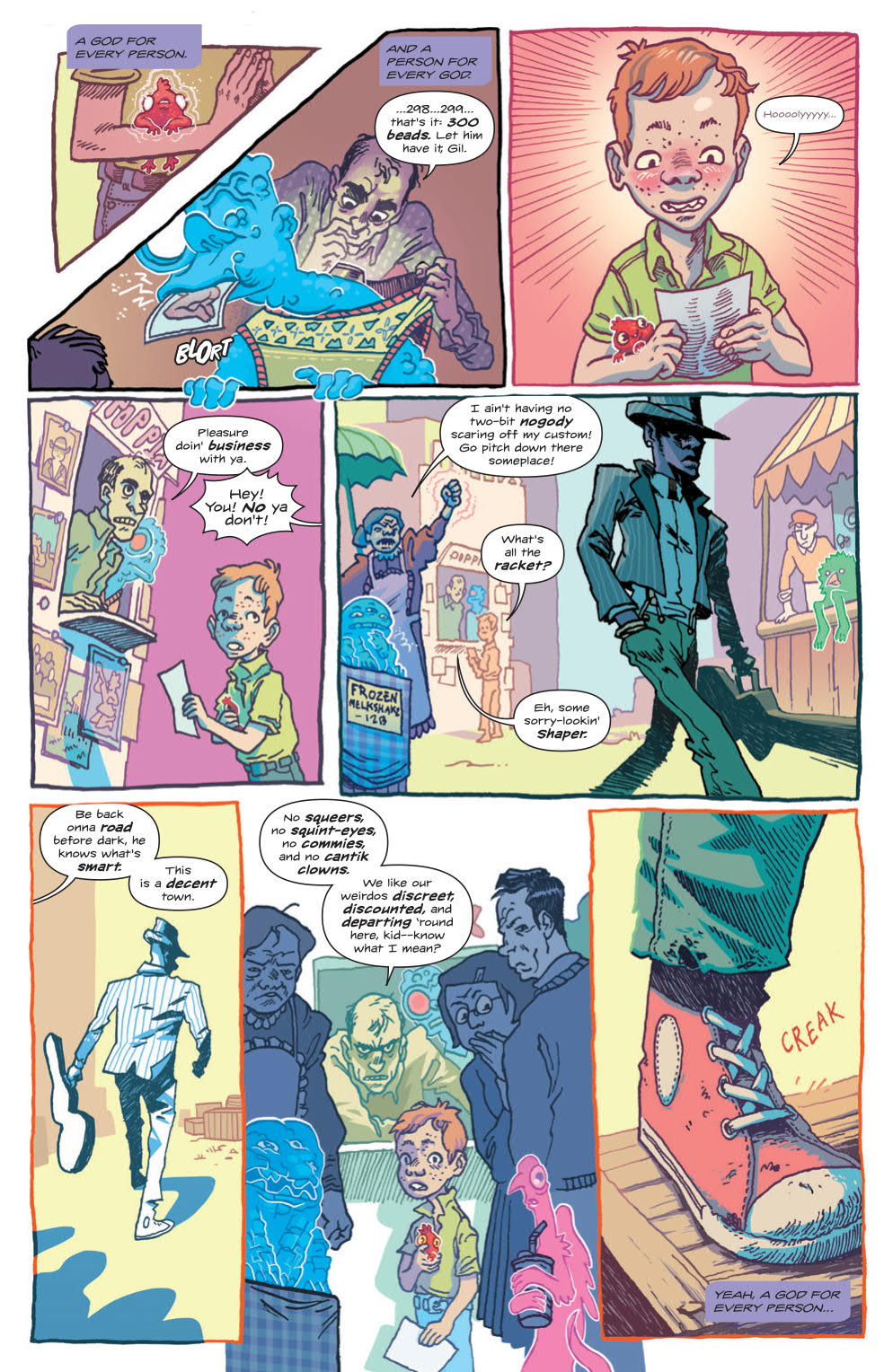 This vibrant first issue is written by Simon Spurrier, illustrated by Jonas Goonface, and lettered by Colin Bell. What first caught my eye was the art — GODSHAPER has some of the most vivid, colorful panels I’ve ever seen in a comic. I fell in love again with small publishers when I realized I’ve never seen art like this from big name publishers. However, BOOM! Studios allows for innovation and exploration of art styles in all their work, and it paid off here. Instead of the flat art I often come across, this comic’s hues of GODSHAPER #1 jump off the page. In particular, the shadows and highlights are gorgeous. Expertly paired colors express beautiful scenes in every panel. Moreover, the art is sophisticated; it conjures feelings of framed art in a museum, not just in a commercial product.

READ: Love the art in GODSHAPER? Here’s an interview with the illustrator, Jonas Goonface!

The story will also pull you in. In alternate 2017, we follow Ennay as he attempts to make what little money Godshapers are allowed to earn. On his journey, we meet Bud, an adorable ghost-like god without a companion. While humans without gods are rare, gods without humans are unprecedented. Ennay and Bud use each other to pass as normal. They help each other swindle unassuming rich folk and even go to a concert celebrating god-free music, where we learn that Ennay is a secret rock legend. Ennay dazzles and delights, wearing flashy makeup and kissing strangers. If the art isn’t enough to keep you reading, then Ennay is. He stole my heart. 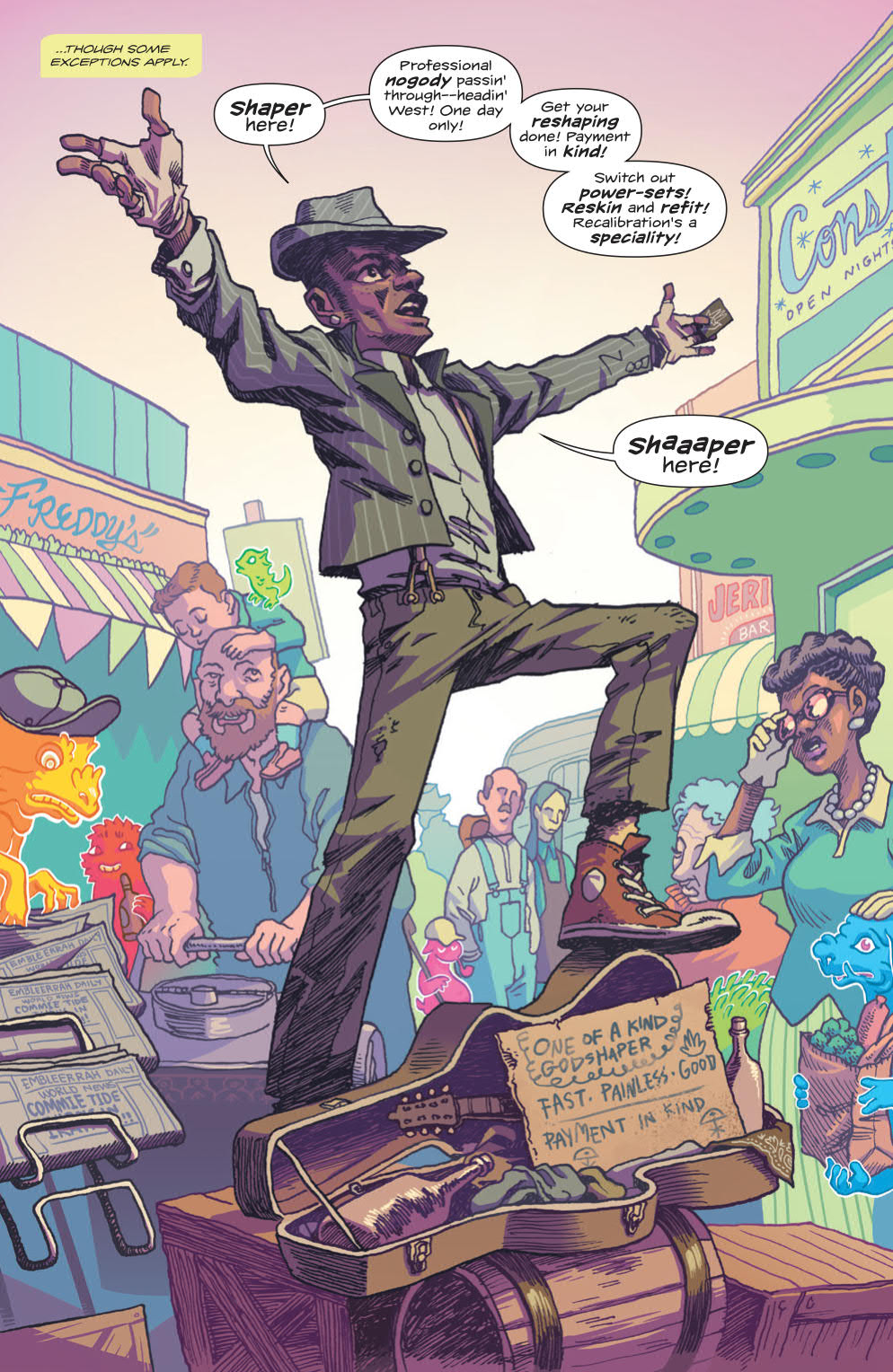 Particularly important to comics is world-building, and GODSHAPER #1 feels tangibly real. The slang spoken is palpable yet easy for the reader to understand. The underground scene of godless music fans parallels our underground music scene of those who appreciate music without digital influence. To that point, I’m excited to see what other messages GODSHAPER has to deliver as the series continues. I’d like to know what happened to religion once everyone received their own personal god.

READ: Need more BOOM! Studios titles to tide you over until GODSHAPER #2? Then why aren’t you reading GOLDIE VANCE?

After finishing GODSHAPER #1, I had many questions about this comic’s world, its realities, and its characters. A good comic leaves you asking questions. GODSHAPER has potential. I’m eager to read the next installment and finding at least some answers to my burning questions.